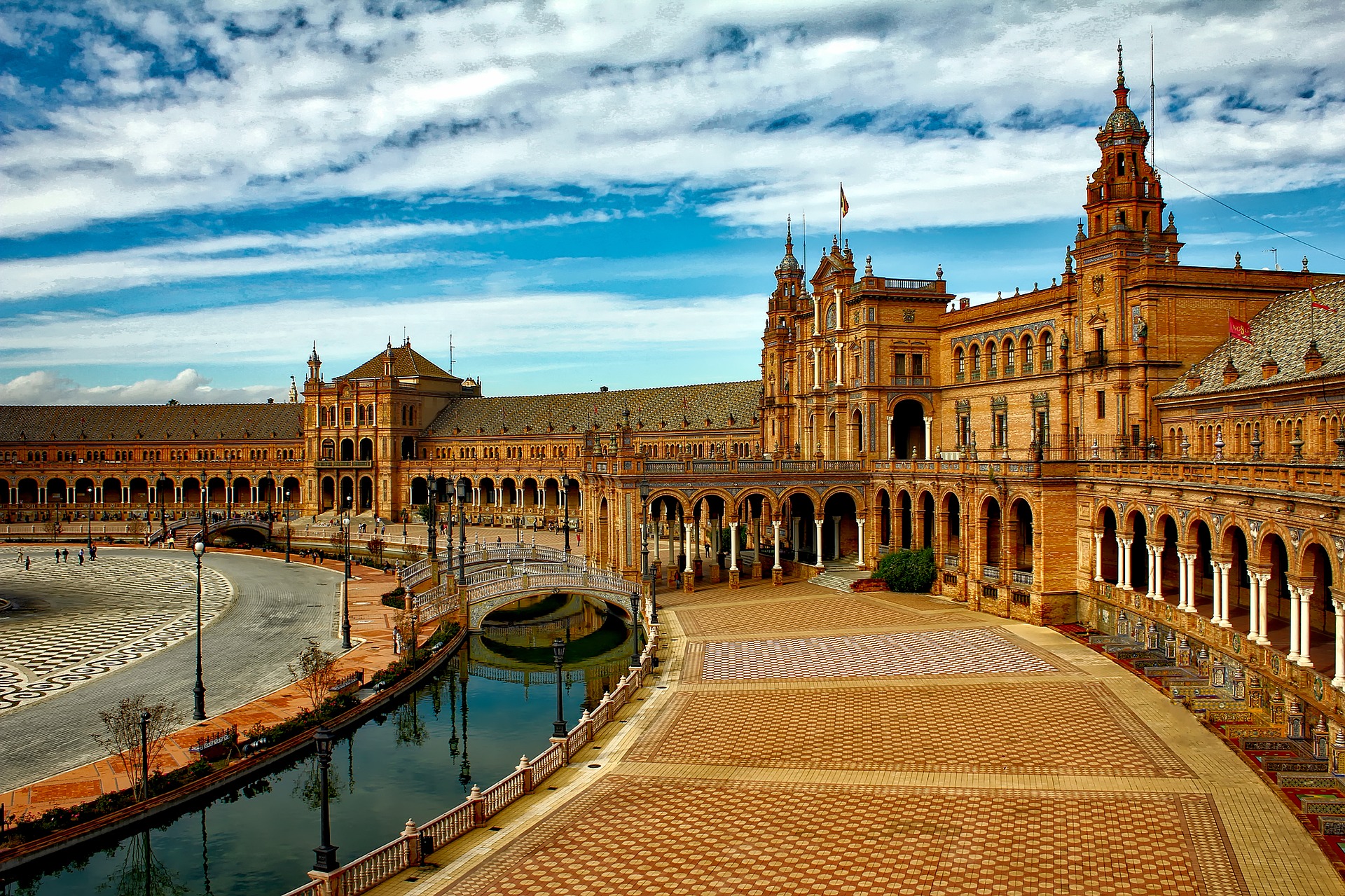 Spain is a fascinating destination whose variety and colourfulness will surprise even the most discerning travellers.

Rich history, cultural influences, art, natural beauty and world-renowned gastronomy will make choosing a Spanish holiday destination a difficult decision, but wherever you go, you will not go wrong.

Here are 5 beautiful cities in Spain to visit in 2020.

Seville is Spain’s third-largest city and the capital of the Andalusia region. It is widely regarded as the home of classic flamenco dancing and has become world-famous for it.

If you want to learn this traditional dance or watch the professionals perform, head to the Triana neighbourhood and watch the story unfold!

Other key sights and attractions in Seville include the Alcázar Castle complex and Seville’s Gothic cathedral.

The Alcázar Castle complex was constructed within the Moorish Almohad dynasty and has an interesting history.

Another must-visit place in Seville in the 18th-century bullring named the Plaza de Toros de la Maestranza where for hundreds of years man has fought the beast in the ultimate test of strength and bravery.

But while history reverberates all around, Seville is as much about the here and now as the past. It’s about eating tapas in a crowded bar or seeing out the end of the day over a drink on a buzzing plaza. The sevillanos have long since mastered the art of celebrating and the city’s great annual festivals, notably the Semana Santa and Feria de Abril, are among Spain’s most heartfelt.

Barcelona is Spain’s second-largest city. Found in the province of Catalonia, Spain, Barcelona offers the perfect blend of culture and history in the modern cosmopolitan metropolis.

Bright, colourful and memorable Barcelona is beyond photogenic and provides perfect images of the city wherever you turn!

The home of Barcelona’s famous FC city is seen by football fans returning to the Camp Nou and watching the Barca boys work their magic on the pitch.

See Also  Life on the Road: The Great Lakes

Pablo Picasso, the famous Spanish artist responsible for introducing Cubism to the world, spent his formative years in Barcelona and studied at its School of Fine Arts. There is a Picasso museum in the Born neighborhood of Barcelona which has over 4,000 of his works on display.

Barcelona’s nightlife is fantastic and doesn’t forget Gaudi’s works. Touring and Barcelona travel, ​​you can make it more interesting with the help of the many tourist tours on offer.

Bars and clubs along the street and music are played until the early hours.

Barcelona has plenty of things to do if you want some fun!

Valencia is home to the Mediterranean side of Spain. This vibrant city is home to an abundance of culture and art.

It has its International airport that flies to other European destinations and domestic flights too.

Valencia is considered the City of Arts and Sciences and is home to some impressive and futuristic buildings like the oceanarium and planetarium and the interactive museum.

As it is located on the coast Valencia boasts some beautiful beaches.

During the summer months, these coastal patches fill with tourists but with warm weather running long into the autumn months Valencia can be enjoyed year-round.

Valencia is also right on the Mediterranean, so you can laze on broad sandy beaches and tuck into delectable cuisine that draws on the sea. This is the home of paella, surely the most famous Spanish dish of all. There are also ultra-modern visitor attractions at the City of the Arts and Sciences, and it all goes to make Valencia one of Spain’s most complete destinations.

At first glance, Spain’s biggest port city appears to have little to offer, but visitors who take the time to peer underneath Bilbao’s industrial façade will find much to explore. The city’s standout attraction is the Guggenheim Bilbao Museum, one of architect Frank Gehry’s most spectacular achievements.

Bilbao is the beating heart of the Basque Country and its largest city. It is the most cosmopolitan of the cities in the region and is constantly evolving. Bilbao ballooned in population during industrialization and prospered through steel production, shipping, shipbuilding and banking.

See Also  How to Travel for Longer for Less

The curvaceous titanium-clad building is home to more than 100 exhibitions of modern art. A short walk from the museum over the futuristic Zubizuri footbridge leads visitors to the historic Old Quarter, which has several important churches.

The restored Santiago Cathedral dates back to the 1300s and exemplifies the Gothic Revival architectural style. The nearby 16th-century Basilica de Begoña features multiple large-scale paintings by the Italian Baroque artist Luca Giordano.

Today, Bilbao is sophisticated and humming with action. But at the same time is relatively stress-free. It is a great city to check out and it has a lot to offer visitors, as well as cheap accommodations. Whatever you are looking for, whether it’s savory Basque cuisine, Basque culture, shopping, nightlife, etc., you will find it here.

Located in Spain’s northeast region of Catalonia, Girona is a small medieval city with a long and varied past. For its ability to withstand invasions from powerful forces for centuries, Girona is known as “The City of a Thousand Sieges.”

An exploration of the city’s Old Quarter takes visitors past Roman walls, Moorish baths and Gothic churches, and it’s easy to get lost in time navigating the labyrinth of narrow alleyways and stone lanes.

No visit to Girona is complete without climbing the 89 steps to the Girona Cathedral to view its famous “Tapestry of the Creation,” an embroidered panel that dates back to the 11th century. The scenic riverside “Rambla de la Llibertat,” Girona’s main promenade, is lined with cafés, shops and restaurants.

Girona may be small, but it’s packed with museums. There’s everything from a city history museum, a cinema museum and a Jewish history museum. You could even spend your whole time in Girona just visiting museums if you wanted to.

Girona is a small city, so you don’t need to spend a long time here to see all it has to offer. A weekend break is the ideal time in which to visit.