How much does it cost to travel to Bulgaria?

How much money will you need for your trip to Bulgaria? You should plan to spend around ư41 ($23) per day on your vacation in Bulgaria, which is the average daily price based on the expenses of other visitors. Past travelers have spent, on average, ư9.15 ($5.09) on meals for one day and ư8.15 ($4.53) on local transportation. Also, the average hotel price in Bulgaria for a couple is ư46 ($26). So, a trip to Bulgaria for two people for one week costs on average ư570 ($317). All of these average travel prices have been collected from other travelers to help you plan your own travel budget.

A vacation to Bulgaria for one week usually costs around ư285 for one person. So, a trip to Bulgaria for two people costs around ư570 for one week. A trip for two weeks for two people costs ư1,140 in Bulgaria. If you're traveling as a family of three or four people, the price person often goes down because kid's tickets are cheaper and hotel rooms can be shared. If you travel slower over a longer period of time then your daily budget will also go down. Two people traveling together for one month in Bulgaria can often have a lower daily budget per person than one person traveling alone for one week.


How expensive is Bulgaria? How much money do I need for Bulgaria?

How much does a trip to Bulgaria cost? Is Bulgaria expensive? The average Bulgaria trip cost is broken down by category here. All of these Bulgaria prices are calculated from the budgets of real travelers.

Looking for a hotel in Bulgaria? Prices vary by location, date, season, and the level of luxury. See below for options.

How much does it cost to go to Bulgaria? Naturally, it depends on the dates. We recommend Kayak because they can find the best deals across all airlines.

The price of renting a car in Bulgaria will depends on dates, the type of car, the location, and your age. We recommend Kayak because they can find the best deals across all car rental companies.

Tips and Handouts Budget in Bulgaria

Bulgaria On a Budget 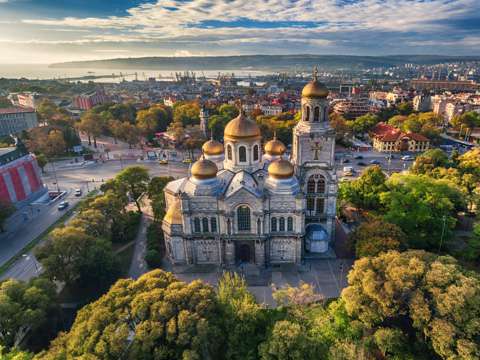 Varna, Bulgaria
Bulgaria is a Balkan country along the Black Sea. It is one of the more frequently overlooked countries in Europe, but it actually has a lot to offer. Bulgaria is a surprisingly diverse country with winter sports, nice beaches, as well as churches and culture that you can immerse yourself in. Because it is less popular than most European countries, you truly feel like you've found an untouched, undiscovered, exotic destination when you travel here. Although the winter can be quite cold, the summer is very pleasant. The area's countryside can also be quite beautiful. There are mountains sprinkled with villages, beaches lined with resorts, and an old world rural setting you won't find elsewhere in Europe.

Bulgaria is divided into five different geographic regions. You're most likely to visit the northwest area, as this is where you will find the country's capital of Sofia. Southwest Bulgaria is very mountainous in nature and is also the country's haven for winter sports. The Northern Thrace is in the plains and has many ancient cities including the most popular, Plovdiv. The Bulgarian Black Sea Coast has many resort towns that see only a few tourists. There are also some larger port cities including Varna and Burgas. In Central Northern Bulgaria you will find many villages and forests lining the Danube River.

It's easiest to travel around the country by bus. This is the most common means of transportation and also the fastest. Trains are slightly less expensive than buses, but they are also slower and not as far reaching. Some destinations in the countryside or further into the mountains require access to a private vehicle. This can be arranged in most of the larger cities such as Sofia, but it can be somewhat expensive.

In general, costs in Bulgaria are quite low. Restaurants are generally cheap and pizza is available almost everywhere as an affordable option. Hotels are more affordable than they are in many Eastern European countries and most of the larger cities have at least a handful of hostels for those who are on a particularly tight budget.

Nessebar: This is a 2500 year old city and World Heritage Site. Located in the Burgas Province, it is a major seaside resort along the Bulgarian Black Sea Coast.
Plovdiv: This is the second largest city in Bulgaria and often referred to as the "heart of Bulgaria" do to its central location and historical importance. The old town of Plovdiv is fun to wander around and get lost in.
Rila Monastery: The Rila Monastery is the largest and most famous Eastern Orthodox monastery in Bulgaria. It is located in the southwestern Rila Mountains and is considered one of the most important religious, cultural and architectural sights in Bulgaria. It was built during the tenth century and was named after its found, the hermit Ivan of Rila.

Shopska Salads: Bulgarian salads are incredibly fresh. They include cucumbers, tomatoes, feta cheese, and a variety of other vegetables, but rarely have lettuce. The dressing is usually made from either sunflower or olive oil and flavored slightly with vinegar. Although somewhat comparable to Greek salads, Shopska salads typically have a subtly different flavor.
Bob Chorba: This is a mint and herb soup that is usually served warm. It's considered a Bulgarian national dish although it comes in a variety of different styles throughout the country. Most often it is made with beans and onions.
Tarator: This is a cucumber and yogurt soup often served cold. It often combines walnuts, dill, garlic and vegetable oil and is most frequently served during the warmer summer months.

By Bryan in Food
Salads in Bulgaria are absolutely awesome! They leave off the lettuce component that so many people are accustomed to and instead have fresh tomatoes, cucumbers, eggs, cheese, among other things. The cheese is similar to feta, although subtly different. It's a very filling and healthy meal and is a great and affordable option for any meal. You will also find them almost anywhere.

Do note that it can actually be somewhat frustrating to try and find restaurants outside of the capital city Sofia. You will find no shortage of cafes, but most of these cafes serve little more than drinks. Food can be surprisingly hard to come by.

In addition to salad, pizza is another popular and cheap option in Bulgaria. You'll find pizza offered at every bus station or restaurant. Sometimes it's served with ketchup on top which can be an unexpected surprise and is best avoided if possible as it is very much an acquired taste.