How much does it cost to travel to Scotland?

How much money will you need for your trip to Scotland? You should plan to spend around £48 ($52) per day on your vacation in Scotland, which is the average daily price based on the expenses of other visitors. Past travelers have spent, on average, £13 ($14) on meals for one day and £12 ($13) on local transportation. Also, the average hotel price in Scotland for a couple is £46 ($50). So, a trip to Scotland for two people for one week costs on average £667 ($725). All of these average travel prices have been collected from other travelers to help you plan your own travel budget.

A vacation to Scotland for one week usually costs around £334 for one person. So, a trip to Scotland for two people costs around £667 for one week. A trip for two weeks for two people costs £1,335 in Scotland. If you're traveling as a family of three or four people, the price person often goes down because kid's tickets are cheaper and hotel rooms can be shared. If you travel slower over a longer period of time then your daily budget will also go down. Two people traveling together for one month in Scotland can often have a lower daily budget per person than one person traveling alone for one week.


How expensive is Scotland? How much money do I need for Scotland?

How much does a trip to Scotland cost? Is Scotland expensive? The average Scotland trip cost is broken down by category here. All of these Scotland prices are calculated from the budgets of real travelers.

Looking for a hotel in Scotland? Prices vary by location, date, season, and the level of luxury. See below for options.

How much does it cost to go to Scotland? Naturally, it depends on the dates. We recommend Kayak because they can find the best deals across all airlines.

The price of renting a car in Scotland will depends on dates, the type of car, the location, and your age. We recommend Kayak because they can find the best deals across all car rental companies.

Tips and Handouts Budget in Scotland

Scotland On a Budget 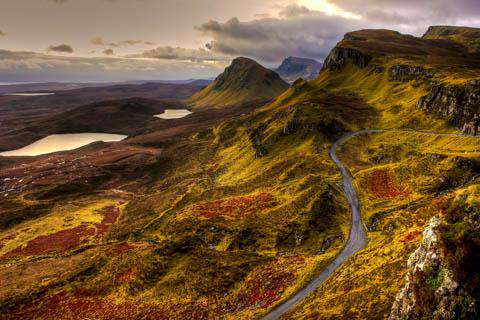 Scottish Highlands
The enchanting country of Scotland is made of rolling hills, lush scenery, charming villages and pubs filled with think accents and strong pints.

This country is a part of Great Britain - also known as the United Kingdom - which includes England, Wales and Northern Ireland. So be careful not to refer to the Scottish as "British," and especially avoid referring to them as "English." Just being aware of the difference will make your trip much smoother.

This lively and friendly country has gained a reputation for being dreary and damp. Well, the latter might true, it doesn't stop the Scots from having a grand time. Still, prepare to experience plenty of rain on your trip.

With over 700 islands and 5 million people, you'll have no problem finding stunning scenery and delightful conversation.

Scotland's a place full of storybook scenes and dramatic castles at every turn. There is always something to see, but the main highlights should include:

The region known as the Great Glen is known for its historical, strategic importance â which is obvious in all of the castles and homes found there. It is a place of nostalgia, intrigue and mystery as this is also home to Loch Ness and its notorious monster.

There's no way to visit the city of Edinburgh without seeing the Edinburgh castle. This popular tourist attraction has dominated city's skyline for 800 years. Over the centuries, it has stood as a royal palace to a prison and today it stands as a national icon and the home to the Scottish Crown Jewels.

For a truly humbling moment with nature, travel to the Isle of Skye. With towering, jagged mountains, wild coastline, farms, waterfalls and a castle, you'll feel like the only thing missing from this fairy tale sight are the fairies.

And if getting in a bit of culture is on your list, make a visit to the National Gallery of Scotland in Edinburgh. This is truly one of the finest galleries in the world housing works from Raphael, Rembrandt, Monet and ore.

The country of Scotland is officially divided into 32 different counties. However, for the purposes of your visit, you'll really only need to know the different regions. The Borders region is sits on the border of England and is known for its rolling hills and former battlefields. The South West region is home to the Isle of Arran, while the Central Belt includes the largest portion of the population with Glasgow and Edinburgh. The Highlands are a popular area to visit for its stunning mountain ranges in the northwest. The North East Scotland region is full of scenic farmland, fishing ports, dramatic castles and the cities of Aberdeen and Dundee. The islands in the north west of the country are split into the three regions of Hebrides, Orkney Islands and Shetland Islands.

As Scotland is a popular destination for most travelers, there is no shortage of activities available around the country. However, there are some uniquely Scottish things to do while visiting.

If you're even a little bit interested in golf, you'll want to try to get a tee time at St. Andrews. People have been putting on these greens since the 15th century. Be sure to book in advance â months in advance - or risk leaving your chances up to the very popular lottery.

Scotland is the home to hundreds of brands of whiskey. Every village makes its own particular taste of whiskey, and with at least 50 distilleries open to visitors you'll have no problem making an afternoon of sampling the local flavors.

Any active traveler will want to take full advantage of all the hills to climb in this part of the world. Take a trip to the popular Westland Highland Way for a stroll, or pick up a copy of the National Tourist Board's free Scotland Walks guide showcasing all the walks available in the country.

The Scots aren't exactly known for their cuisine, but there are many new restaurants bringing global influences to the country. Some Scottish dishes, however, are worth a try. Scotch beef, for example is some of the best in the world. A Scotch egg is a hard boiled egg surrounded by breaded sausage. Of course, you can't forget the traditional haggis made of the heart, liver and lungs of a sheep cooked in the stomach. End any Scottish meal with the joke-turned-tradition of a deep friend Mars bar.

If you're looking to travel between major cities in Scotland, the simplest solution is by bus or rail. These systems are completely modern and very comfortable for travelers.

While a car will grant you greater access to small towns, the highlands or the mountains, beware that rural roads are very beaten up. If you plan on renting a car, keep a keen eye on the road, and remember they drive on the left in Scotland.

Scotland is a large country with plenty of beautiful landscapes and wilderness to see. If you want to see everything, read this 7-day itinerary for Scotland