A Travel Price Comparison for Vacations, Tours, and Honeymoons Guangxi vs. Heilongjiang

Should you visit Guangxi or Heilongjiang?

Should I visit Guangxi or Heilongjiang? This is a common question asked by many travelers. By figuring out which city is more affordable, you'll understand where you can get more bang for your buck. So, let's dive into the data, which all comes from actual travelers.

An autonomous region in southern China, Guangxi is mainly known for its impressive landscapes - rivers, caves, and towering karst topography. The Li River winds through the province connecting Guilin and Yangshuo, Guangxi's most popular cities. Other attractions include waterfalls, beaches, rice terraces, and local culture.

The Heilongjiang Province is the furthest northeast province in China, bordering Russia. The Province is best known for their long, cold, snowy winters, making them a popular destination for winter sports and ice festivals. Due to the proximity to Russia, Heilongjiang has a lot of Russian influenced buildings and practices; don't be surprised to see some signs written in both Mandarin and Russian in the border towns!

Which city is cheaper, Heilongjiang or Guangxi?

The average daily cost (per person) in Guangxi is $50, while the average daily cost in Heilongjiang is $47. These costs include accommodation (assuming double occupancy, so the traveler is sharing the room), food, transportation, and entertainment. While every person is different, these costs are an average of past travelers in each city. Below is a breakdown of travel costs for Guangxi and Heilongjiang in more detail.

An average hotel room with basic furnishings costs about $30 in Guangxi For the most convenient locations and nicer amenities you can expect to pay a bit more.

Travelers usually pay around $38 for a double occupancy room in Heilongjiang If you want to be in a premiere location or have high end amenities, you can expect to pay a bit more.

Guangxi food costs typically run travelers around $20 per day. Eating every meal in a nicer restaurant will drive the cost up, and grabbing fast food or casual meals will help you save money.

While meal prices in Heilongjiang can vary, the average travelers spends about $11 per day on food. Based on the spending habits of previous travelers, when dining out, an average meal in Heilongjiang should cost around $4.40 per person. Breakfast prices are usually a little cheaper than lunch or dinner. The price of food in sit-down restaurants in Heilongjiang is often higher than fast food prices or street food prices.

To get around in Guangxi, the average visitor spends $26 per day, per person. This includes the costs of taxi rides and private drivers as well as public transportation, which tends to be much more affordable.


Hired Cars and Shuttles in Guangxi

Also for Guangxi, here are a few examples of actual transportation services:

In Guangxi, the costs for things to do, activities, admission tickets, and other sightseeing expenses are on average $7.38 per person, per day.

Sightseeing expenses in Heilongjiang, including the cost of admission tickets for day tours, museums, and attractions, usually cost an average of $48 per day, per person.


Tours and Activities in Guangxi

Also, here are some specific examples of entertainment, tickets, and activities for Guangxi.

Alcoholic beverages can often be a significant portion of a traveler's budget, and the costs can vary greatly from person to person. In Guangxi, the average amount that a visitor spends on alcoholic beverages per day is $7.18.

When comparing the travel costs between Guangxi and Heilongjiang, we can see that Guangxi is more expensive. However, the two cities are actually relatively comparable in price, as the difference is somewhat minimal. Generally, this means that you could travel with generally the same travel style and level of luxury in each place. Since both cities are in Asia, it's no surprise that their costs are relatively close, as many destinations here have somewhat similar travel prices overall. 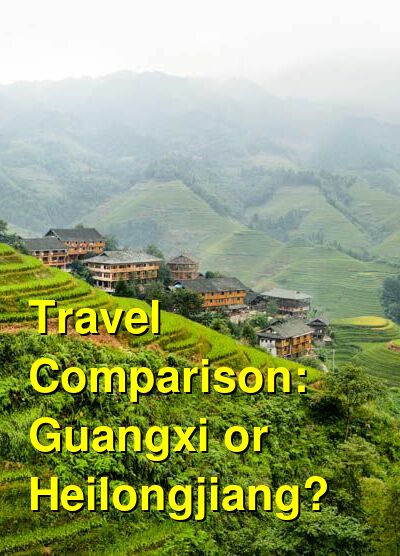