A Travel Price Comparison for Families, Couples, and Backpackers Serengeti National Park vs. Masai Mara for Vacations, Tours, and Honeymoons

Should you visit Serengeti National Park or Masai Mara?

If you're trying to decide where to visit between Serengeti National Park or Masai Mara, this travel cost comparison can help. The overall cost of travel is usually a consideration when deciding where to go next, and the cost comparison below can help you decide based on the average prices from other travelers along with your own travel budget.

Sprawling across 5,700 square miles of northern Tanzania in East Africa, Serengeti National Park makes up one of the oldest ecosystems in the world-one whose climate, vegetation, and fauna has barely changed over the past million years.  Today the park is a major wildlife destination, especially during the Great Migration when over a million hoofed animals are on the move.

Masai Mara National Reserve is a beautiful, scenic, nature reserve in southwest Kenya, just west of the capital city, Nairobi. The reserve belongs to the Masai people and was created in order to protect the land and the people and animals living on it. Masai Mara is considered to be one of the best reserves in all of Africa, offering the quintessential African safari experience.

Which city is cheaper, Masai Mara or Serengeti National Park?

The average daily cost (per person) in Serengeti National Park is $109, while the average daily cost in Masai Mara is $103. These costs include accommodation (assuming double occupancy, so the traveler is sharing the room), food, transportation, and entertainment. While every person is different, these costs are an average of past travelers in each city. Below is a breakdown of travel costs for Serengeti National Park and Masai Mara in more detail.

A hotel room in Serengeti National Park is about $100 This assumes double occupancy and modest accommodations.

Accommodation prices vary by location and style, but travelers pay on average about $70 for a double occupancy room in Masai Mara.

On average, meal and food prices in Masai Mara cost around $31 per person, per day. While this price can vary widely by location, the type of restaurant, and the amount of food ordered, a typical meal often costs around $12.


Is it cheaper to fly into Serengeti National Park or Masai Mara?

Prices for flights to both Masai Mara and Serengeti National Park change regularly based on dates and travel demand. We suggest you find the best prices for your next trip on Kayak, because you can compare the cost of flights across multiple airlines for your prefered dates.

Serengeti National Park's costs for entertainment, tickets, attractions, and tours will often cost around $46 per person, per day. This cost can vary widely by the type of activity, however, as this includes admission tickets, day tours, museums, and other things to do.

Entertainment and activities in Masai Mara typically cost an average of $57 per person, per day. This includes fees paid for admission tickets to museums and attractions, day tours, and other sightseeing expenses.

While the amount that someone spends on alcohol while visiting Serengeti National Park may vary from person to person, on average a person spends $13 per day on alcoholic beverages.

The average person spends about $25 on alcoholic beverages in Masai Mara per day. The more you spend on alcohol, the more fun you might be having despite your higher budget.


When comparing the travel costs between Serengeti National Park and Masai Mara, we can see that Serengeti National Park is more expensive. However, the two cities are actually relatively comparable in price, as the difference is somewhat minimal. Generally, this means that you could travel with generally the same travel style and level of luxury in each place. Since both cities are in Africa, it's no surprise that their costs are relatively close, as many destinations here have somewhat similar travel prices overall. 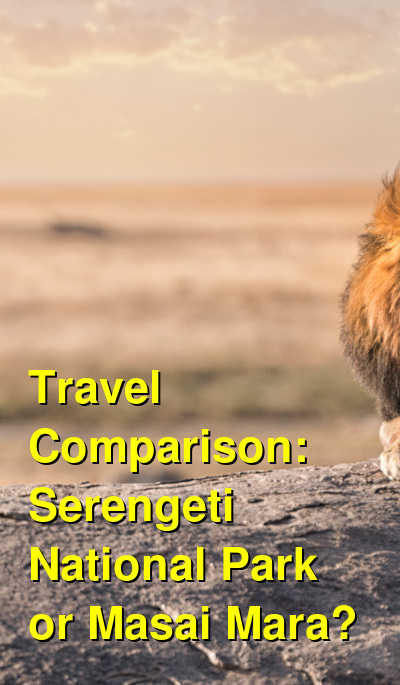