Christmas Tours in the USA and Canada

North America has many different traditions and ways that people celebrate Christmas, because of the multi-cultural nature of these nations. Many customs are similar to those in the UK, France, Italy, The Netherlands, Poland and Mexico. Towns and cities often decorate the streets with lights to celebrate Christmas. Some towns set up Christmas Shops for the Christmas season, and many places have light displays to brighten the night sky. With so much charm and excitement, a trip to the US and Canada during the Christmas season is bound to inspire awe in any traveler, and luckily there are wonderful tour options available to allow you to make the most of these Christmas-wonder-lands.

by Evergreen Tours
$6071
14 days
Enjoy a white Christmas wonderland exploring the Canadian Christmas charm. Start in Calgary and end in Victoria with this 14 day tour package taking you through Calgary 9 other destinations in Canada including meals and transportation. You will be met at Calgary International Airport and transferred to your hotel.

Calgary is an eclectic city that is a blend of cowboy culture and modern metropolis. Meet your Tour Director and fellow travelers for a special welcome dinner. Ascend Calgary Tower and take in the views of the city and skyline while you dine on a sumptuous dinner. Take a guided tour of the home of the famous stampede. See Stephen Ave filled with Calgary's boutiques, continue to the beautiful Olympic Plaza commemorating the 1988 Winter Olympic Games, then pass by historic Calgary City Hall, Fort Calgary and Stampede Park. Depart Calgary and make your way from the plains to the wild and beautiful Kananaskis country, a system of pristine parks. Drop in to Boundary Ranch, a traditional mountain property deep in the Kananaskis valley and enjoy an authentic Western-Canadian style. Afterwards head to your alpine style hotel that has unbeatable views of the surrounding mountains. Follow roads that snake through the mountains with majestic views always at the forefront.

Enter Banff National Park and the quintessential Rocky Mountains town of Banff with Mount Rundle and Mount Cascade dominating its skyline. Take the Banff Gondola to the top of Sulphur Mountain where you will witness inspiring views over the surrounding peaks and valleys. Experience iconic Canada when you meet a retired Mountie. Head to the historic "Castle in the Rockies", Banff Springs Hotel for a history tour of the hotel that was originally built in 1888 for the Canadian Pacific Railway. Continue to Lake Louise for one of the highlights of your journey as you arrive at Canada's "Diamond in the Wilderness". Jump on board a traditional horse drawn sleigh and take a fun sleigh ride around Lake Louise taking in the views. Travel north along the Icefields Parkway, acclaimed as one of the most spectacular journeys in the world. Enjoy breath-taking mountain scenery as you pass rugged peaks and glaciers fringed by thick forest and glistening frozen lakes.

Arrive in Jasper National Park, an alpine wonderland of pristine wilderness and abundant wildlife. Spend the afternoon by the fire or explore the quaint town of Jasper. Choose one of two amazing Jasper activities: take one of Jasper's most impressive winter excursions through the park to the bottom of the beautifully carved Maligne Canyon where you will see frozen waterfalls, ice caves, and incredible ice formations, or journey through Jasper National Park which is renowned for its prolific wildlife such as elk, deer, moose, wolves, big horn sheep and coyotes.

Next, board VIA Rail "The Canadian" train, for one of the world's great train journeys. It all begins with a champagne reception and welcome by the train conductor. From the comfort of the glass-dome car you can admire the giant mountain peaks, shimmering lakes and immense forests. In the dining car you are treated to cuisine prepared by an on board chef, and then afterwards you can retire to the comfort of your private bedroom.

Arrive into Vancouver, a beautiful harbor side city with a perfect balance of nature mixed with cityscape. Enjoy a sightseeing tour including Stanley Park with its intricately carved totem poles, the waterfront area, Gastown with its lively shops and restaurants and Granville Island which is famous for its fresh food markets. Visit the Capilano Suspension Bridge Park where you will be amazed by the hundreds of thousands of lights throughout the park with the canyon transformed into a world of festive lights and visual enchantment. Journey along the Sea to Sky Highway as the road follows the rugged coastline with magnificent views of Horseshoe Bay on your left and forested parks and mountains on your right.

Arrive at the charming alpine resort of Whistler Village, a world famous ski resort sitting at the base of two glorious mountains, Whistler and Blackcomb. Celebrate Christmas day here with the white Christmas you've always dreamed of.

Travel back along the Sea to Sky Highway to the ferry terminal where you will board the BC ferry. Make your way to British Columbia's historic capital city, Victoria where you will have a brief orientation tour of Victoria's Inner Harbor, Bastion Square, Beacon Hill and residential areas. Explore the world-famous Butchart Gardens, a 22 hectare showplace of magnificent, colorful gardens. Again you will be astounded at the beautiful light show that adorns all the gardens and buildings. The entire garden complex shines and twinkles with a fairytale display. Explore the gardens and learn about the history and flora while gazing in wonder at the dazzling spectacle. Your tour comes to an end here in Victoria.

Texas: The Lone Star State, with Christmas in San Antonio (and New Orleans, too)

by Cosmos
$0
1 days
Celebrate Christmas in the Lone Star state of Texas. Start in Dallas and end in New Orleans with a 12 days tour taking you through Dallas, and 8 other destinations in the USA including hotel accommodations, an expert guide, meals, and transportation. With its large size and diversity, Texas locals say, "Texas, it's like a whole other country."

On this tour through the Lone Star State, you'll discover its major cities - Dallas, Austin, San Antonio, and Houston - and some of its historic landmarks, museums, and must-see sights before crossing into Louisiana for time in Lafayette and New Orleans. Start with the sights of Dallas, beginning with a visit to legendary Southfork Ranch, the internationally renowned filming location of the Dallas television series. Tour the famed Ewing Mansion, featuring an exciting array of memorabilia. See the gun that shot J.R., Lucy's wedding dress, the "Dallas" family tree, and Jock's Lincoln Continental. Return to Dallas for an included city sightseeing that features Pioneer Plaza, commemorating the trails that brought settlers to Dallas and cattle to market; the Historic West End; and Dealy Plaza, where history buffs can learn all about a moment in history at the SIXTH FLOOR MUSEUM.

Journey to Fort Worth, a Texas city famous for its unmistakable combination of "cowboys and culture." Visit the Stockyards National Historic District to enjoy a "Stockyards Experience" by seeing the "Spirit of the West movie. Meet the drivers/cowboys of the Fort Worth Herd and see a Longhorn cattle drive before visiting the Texas Cowboy Hall of Fame.

Head to Austin where you'll hear the sounds that make it the "Live Music Capital of the World." From blues and indie rock to country, jazz, and more, Austin's nearly 200 live music venues will surely grab your attention. Upon arrival, visit the Bob Bullock State History Museum that tells the Story of Texas. Enjoy a city sightseeing tour that features Austin's downtown, including historic Sixth Street, the Texas Capitol complex, Governor's Mansion, and the University of Texas.

A short drive from Austin to the most visited city in Texas: San Antonio, home of the Alamo and the historic River Walk. Sightseeing continues with a guided visit to San Fernando Cathedral, the oldest in the United States, and downtown's authentic Mexican marketplace, El Mercado. Afterward, visit the infamous ALAMO. It was here in 1836 that a small band of Texans defended themselves against the Mexican Army, and although the Alamo fell, it remains hallowed ground and symbolizes courage and sacrifice for the cause of liberty. Enjoy a special Thanksgiving Day Feast before continuing to the next stop. Texas Hill Country is home to the Lyndon B. Johnson National Historic Park. Discover the story of the 36th President, from his ancestors to his final resting place, at the LBJ Ranch. Visit the Texas White House before returning to San Antonio.

Continue to Houston, a city of firsts - home to the first successful human heart transplant, America's first public television station, and the first word spoken on the Moon. Gain an appreciation for Houston's rich history on a sightseeing tour of America's fourth-largest city that includes the Theatre District, which is second only to New York City. Visit Johnson Space Center, home of NASA and the U.S. Space Program. With this behind-the-scenes journey, you will also visit the Historic Apollo Mission Control Center, and Saturn V Rocket, the most powerful moon rocket ever built.

A beautiful drive past fertile prairies, delicate marshes, and abundant wildlife takes you to Lafayette, Louisiana. Board a boat for a cruise through the winding, swampy waterways of the Atchafalaya Basin. Go for a guided visit to the Houmas House Plantation & Gardens. In 1963, the defining Bette Davis film, Hush, Hush Sweet Charlotte, was shot on the property.

Continue across Bayou Country into New Orleans, capital of Dixieland and the "City Care Forgot." Upon arrival, a guided sightseeing tour focuses on the sights and sounds of New Orleans, featuring French Quarter landmarks including St. Louis Cathedral, Jackson Square, and a visit to a unique above-ground cemetery. The trip ends here with guests departing on individual schedules. Transfers to New Orleans International Airport are included.

Budget Your Trip is all about finding out how much everything costs so that you can travel cheaper and longer. With average daily travel costs that are calculated from the budgets of real travelers, you can find out how much money you need to plan your next adventure. On this website you can also find travel advice, tour information, accommodation reviews, and activity suggestions for thousands of destinations around the world.
About BudgetYourTrip.com
New Years Eve Tours in New York City 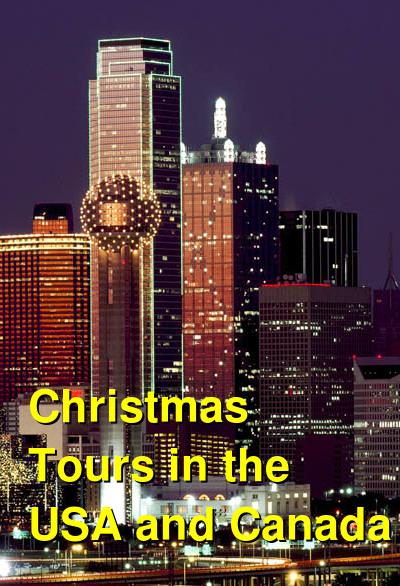