The Northern Lights, or Aurora Borealis, is a natural phenomenon that can paint the night sky with unearthly, surreal color. The bright dancing lights of the aurora are actually collisions between electrically charged particles from the sun that enter the earth's atmosphere. The lights are seen above the magnetic poles of the northern and southern hemispheres. Auroral displays appear in many colors. Although pale green and pink are the most common, shades of red, yellow, green, blue, and violet have also been reported. The lights appear in many forms from patches or scattered clouds of light to streamers, arcs, rippling curtains or shooting rays that light up the sky with an eerie glow. The Northern Lights usually circle the globe in a circular or elliptical "oval" centered on the earth's North Magnetic Pole. The area of greatest auroral activity is usually right under the auroral oval, which changes dynamically according to how the solar wind is flowing on any particular night. The auroral oval, meaning the area with the highest probability of seeing the northern lights, covers most of Alaska, northern parts of Canada, the southern half of Greenland, Iceland, Northern Norway, Sweden and Finland. As well as the western half of the Russian north. These are the most common destinations that draw travelers from all over in hopes of spotting the mystical dancing lights that are high priority on many "bucket lists". Greenland is one of the most popular destinations for seeking a view of the famous dancing lights, and there are several tour options here to give you the best opportunity to spot them.

by Intrepid Travel
$6395
10 days
Starting and finishing in Reykjavik, this Arctic adventure substitutes the long sea voyages with flights so that you'll see a whole lot in under ten days of cruising. This is one trip you won't be forgetting any time soon. Enjoy an overnight stay in Reykjavik, then fly from Reykjavik to Constable Point to board your vessel and begin your expedition. You'll cruise through breathtaking Apelfjord. Fjords punctuate the scenery all around. Cruise through a multitude of dazzling icebergs, fjords, and sounds in all shapes and sizes. Additional optional activities are available to participate in, on some or all of the departures of this itinerary, including kayaking adventures in small groups of maximum 16 people, and hiking adventures to explore communities, shorelines or glaciated landscapes, often on the lookout for wildlife.

Observe the multi-hued mountains surround lovely Brogetdal, which was originally called "painted valley", and later translated to mean "multicolored valley". Travel to the impressive and rarely visited Waltershausen Glacier, an imposing ice floe at the head of Nordfjord. See Blomsterbugten, the "Bay of Flowers," home to beautiful purple and gold colored rocks that you'll see in the distance, or on a hike for those who wish. Head on to Ella Oya, a hiker's paradise surrounded by ice-choked waters, rugged cliffs and sky-blue icebergs. See Itoqqortoormiit, East Greenland's most northerly community with a blend of traditional and modern lifestyles. Spend time bonding with the Inuit people and gaining an appreciation of their way of life. See huge icebergs - larger than football fields and taller than apartment buildings - crossing Hall Bredning, part of Scoresbysund. Sailing on, deeper into Scoresbysund you'll encounter massive icebergs and an ancient Thule settlement as you approach Sydkap. Arrive at Constable Point. Sit back and enjoy your charter flight from Constable Point to Reykjavik, the vibrant and artistic capital of Iceland. Enjoy an overnight stay in your comfortable Reykjavik hotel before your tour concludes the next day.

by Peregrine
$6395
10 days
Hike and cruise the wilds of Greenland on this in-depth Arctic adventure, flying in and out of Reykjavik. Take in both the world's largest national park and its longest fjord system. Arriving in Constable Point after a flight from Reykjavik, you'll spend a day drifting through the iceberg-potted waters of Apelfjord, cruising about in search of Arctic fox and musk ox by Zodiac and sizing up the gigantic Walterhausen Glacier. Marvel at the multi-hued mountains surround lovely Brogetdal, which was originally called "painted valley", and later translated to mean "multicolored valley". Landings at Blomsterbugten, the "Bay of Flowers" with purple and gold colored rocks, Ella Island, a hiker's paradise with ice-choked waters, rugged cliffs and sky-blue icebergs, and Ittoqqortoormiit, East Greenland's most northerly community, will provide the chance of hikes through tundra's, visits to ancient Thule settlements and encounters with local Inuit culture. You'll see huge icebergs larger than football fields and encounter ancient settlements. Optional activities are available at some stops including kayaking or hiking, to help you get even more out of these already amazing destinations. The scenery here is breathtaking, and is something you will never forget. Both figuratively and literally, this voyage will feel like a journey to the ends of the earth.

by Exodus Travels
$6235
10 days
Start and end in Reykjavik with a 10 day tour package taking you through Reykjavik, Iceland and 3 other destinations including accommodation in a hotel, an expert guide, meals, transport, and more. Nowhere on earth can nature's most spectacular light show be better seen than in the autumn and winter skies above Greenland's eastern coast, and this departure offers the best chance to observe the majestic Aurora Borealis or Northern Lights. On this voyage, visit the remains of Thule camps, the ancestors of the indigenous people of Greenland, enjoy the splendor of Scoresbysund as the ship navigates past majestic icebergs, some over 100 meters high, and get a glimpse into the lifestyle of the remote residents of Ittoqqortoormiit, the most northerly community in East Greenland.

This tour also offers once-in-a-lifetime opportunities to hike some of the most pristine wilderness on the planet. Start your trip in Reykjavik and fly from there to Constable Point to board your vessel and begin your expedition. Cruise through breathtaking Apelfjord. Explore and cruising through a multitude of dazzling icebergs, fjords and sounds. View colorful vistas and fascinating geology of Brogetdal. Observe the impressive and rarely visited Waltershausen Glacier, an imposing ice floe at the head of Nordfjord. Explore Blomsterbugten, the 'Bay of Flowers', which is home to beautiful purple and gold colored rocks either from distance, or on a hike for those who wish. Experience Ella Oya, a hiker's paradise, surrounded by ice-choked waters, rugged cliffs and sky-blue icebergs. Visit, Itoqqortoormiit, East Greenland's most northerly community with both traditional and modern lifestyles. Meet with the Inuit people and gain an appreciation of their way of life. Encounter unforgettable scenery, with towering mountain sides and hundreds of monumental icebergs. Arrive back at Constable Point where you'll have a charter flight back to Reykjavik.

Budget Your Trip is all about finding out how much everything costs so that you can travel cheaper and longer. With average daily travel costs that are calculated from the budgets of real travelers, you can find out how much money you need to plan your next adventure. On this website you can also find travel advice, tour information, accommodation reviews, and activity suggestions for thousands of destinations around the world.
About BudgetYourTrip.com
Northern Lights Tours of IcelandNorthern Lights Tours in NorwayEurope ToursTours of Western Europe 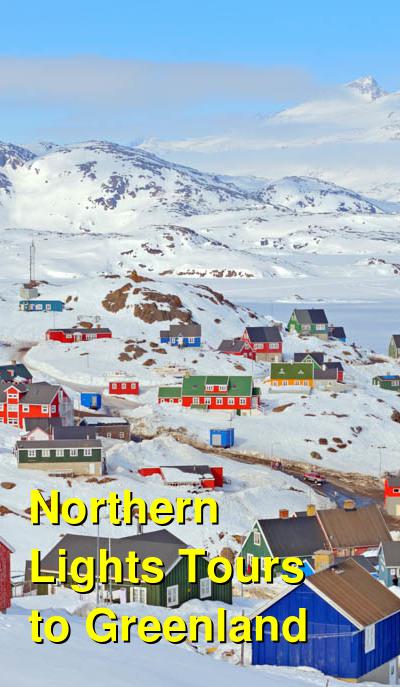