The Northern Lights, or Aurora Borealis, is a natural phenomenon that can paint the night sky with unearthly, surreal color. The bright dancing lights of the aurora are actually collisions between electrically charged particles from the sun that enter the earth's atmosphere. The lights are seen above the magnetic poles of the northern and southern hemispheres. Auroral displays appear in many colors. Although pale green and pink are the most common, shades of red, yellow, green, blue, and violet have also been reported. The lights appear in many forms from patches or scattered clouds of light to streamers, arcs, rippling curtains or shooting rays that light up the sky with an eerie glow. The Northern Lights usually circle the globe in a circular or elliptical "oval" centered on the earth's North Magnetic Pole. The area of greatest auroral activity is usually right under the auroral oval, which changes dynamically according to how the solar wind is flowing on any particular night. The auroral oval, meaning the area with the highest probability of seeing the northern lights, covers most of Alaska, northern parts of Canada, the southern half of Greenland, Iceland, Northern Norway, Sweden and Finland. As well as the western half of the Russian north. These are the most common destinations that draw travelers from all over in hopes of spotting the mystical dancing lights that are high priority on many "bucket lists". Iceland is one of the most famous destinations for seeking a view of the famous dancing lights, and there are several tour options here to give you the best opportunity to spot them.

by Intrepid Travel
$1330
6 days
Travel to Iceland and experience its astounding natural features on this spectacular tour. Visit gurgling hot springs, majestic waterfalls, volcanoes- both alive and extinct, and Europe's biggest glacier. Discover the raw natural beauty of this spectacular Nordic wonderland on a 6-day trip that will have you stalking close to epic glacial sheaths, feeling the icy spray of the Gullfoss waterfall and becoming acquainted with the culture and cuisine of an Arctic island outpost unlike any other. Spend some time exploring the northernmost capital of Reykjavik, go on Iceland's most popular tour to see the "Golden Circle" where you'll see the Gullfoss waterfall and Iceland's Geysir geothermal area, where you'll see the Strokkur geyser shoot water 30 meters into the air. See the beautiful Skogafoss waterfall, one of the biggest waterfalls in Iceland. Visit Iceland's South Shore to take in more of the country's renowned natural wonders, including the stepping-stone rock formations of Reynisdrangar and the night black sand beach of Reynisfjara. Pass the lava of the Laki eruption of 1782 to 1783. Visit the famous Jokulsarlon Glacier Lagoon, a stunning sea of floating icebergs whose blue contrast with the charcoal colored sand of the beach. Drive to Skaftafell National Park, where you'll have the option take a walk on Europe's biggest ice cap - Vatnajokull - which has around 30 glaciers flowing out from it. Each night of the tour offers another chance to see the spectacular light show and your tour concludes back in Reykjavik

by Peregrine
$3260
8 days
While the main focus of this eight-day tour is viewing the spectacular northern lights, there are plenty of sights to see throughout the day. Starting with a city tour of Reykjavik, passing the old harbor, city Centre, towering Hallgrimskirkja church and the dome-shaped Pearl. Continue to Thingvellir (Parliament Plains), the original site of Iceland's old parliament. Visit the geothermal geysers and witness the spouting hot springs of Geysir and Strokkur, before driving to Gullfoss. Enjoy a visit to Skogafoss, a waterfall on the Skoga River. Go to Skaftafell National Park travelling through the lava of 1783's Laki volcanic eruption. Continue to Jokulsarlon, also known as the Glacier Lagoon. Then continue to the small village of Vik on Iceland's south coast. Drive through the beautiful scenery of Iceland's South Shore. Wander past the enormous basalt sea stacks at Reynisdrangar, marvel at the colors of Solheimajokull Glacier and admire the spectacular Seljalandsfoss waterfall. Stop at the Blue Lagoon for a relaxing bath in this geothermal spa, a quintessential Icelandic experience. Fly to Akureyri and transfer to Lake Myvatn, one of the most interesting geological areas in the northern hemisphere. Walk past solfataras, natural volcanic mud pits that bubble and boil, and the craggy lava fields of Dimmuborgir and the strange pseudo-craters at Skutustadir. Each day presents another opportunity for observing the natural light show, and your tour concludes back in Reykjavik on the 8th day.

by Saga Travel
$602
4 days
Start and end in Reykjavik with a 4 day tour package taking you through Reykjavik and 3 other destinations in Iceland. This small group tour that includes accommodation in a hotel as well as an expert guide, meals, transport, and more. Start your tour in Reykjavik and get to know your guide and fellow travelers. Head out to the Golden Circle, a popular tour for good reasons, it highlights Iceland's main attractions, the saga, geothermal wonders and powerful nature. Visit historical locations such as THingvellir National Park and Skalholt Church in addition to beautiful sites such as Gullfoss Waterfall and Geysir Hot Spring. Scan the night sky for views of the beautiful light display. Enjoy a free time in Reykjavik City. The city offers a variety of options, whether you want adventures such as a Whale Watching boat trip or relaxing day in the city center. Your tour concludes back in Reykjavik.

by On The Go Tours
$6745
8 days
Start and end in Reykjavik with an 8 day tour package taking you through Reykjavik and 16 other destinations in Iceland including accommodation in a hotel, an expert guide, meals, transport, and more. Enjoy a two-hour city tour of the world's northern-most capital where you'll see the Hallgrimskirkja church- one of the crowning landmarks and star attractions of Reykjavik. Learn about Icelandic cheese and the unique dairy product skyr at a cheese and skyr school where you'll get to sample some products and enjoy lunch. Visit Thingvellir National Park where the oldest legislative assembly in the world was founded. Relax at the new thermal baths in Laugarvatn, where healing geothermal heat simmers directly from the ground and the landscape is painted with beautiful mountain ranges. View Gullfoss, "the golden falls", Iceland's most famous waterfall. Stop at the Geysir geothermal fields with a variety of hot springs and bubbling pools. Watch the Strokkur geyser "the Churn" which erupts at 5-10 minute intervals. Observe the nearly 3000 year old and 55m deep explosion crater called Kerid that is filled with water. Taste hot steam baked bread - one of the region's culinary specialties. Stroll along the black sands at one of the local beaches. Tour a local folk museum and a historic wooden church in one of Iceland's prettiest coastal villages. Tour the South coast including the high but narrow Seljalandsfoss and Skogafoss waterfalls. You can also choose to take an easy guided walk to a nearby glacier, or continue the bus tour to explore a black lava beach with bird cliffs. Visit a Viking ship and history museum and visit the world famous Blue Lagoon for a soak in the relaxing geothermal water including a drink of your choice and a volcano scrub or an algae mask. Search for the Northern Lights by boat on a Northern Lights cruise. Explore West Iceland on a full day super-jeep adventure. The stunning scenery includes the ice of the great Langjokull glacier and the fire of one of the country's most active geothermal areas. Each night is another chance at seeing the fabulous light show. Your tour concludes back in Reykjavik with included transportation to the airport.

Budget Your Trip is all about finding out how much everything costs so that you can travel cheaper and longer. With average daily travel costs that are calculated from the budgets of real travelers, you can find out how much money you need to plan your next adventure. On this website you can also find travel advice, tour information, accommodation reviews, and activity suggestions for thousands of destinations around the world.
About BudgetYourTrip.com
Tours of Western EuropeEurope ToursNorthern Lights Tours in NorwayNorthern Lights Tours to Greenland 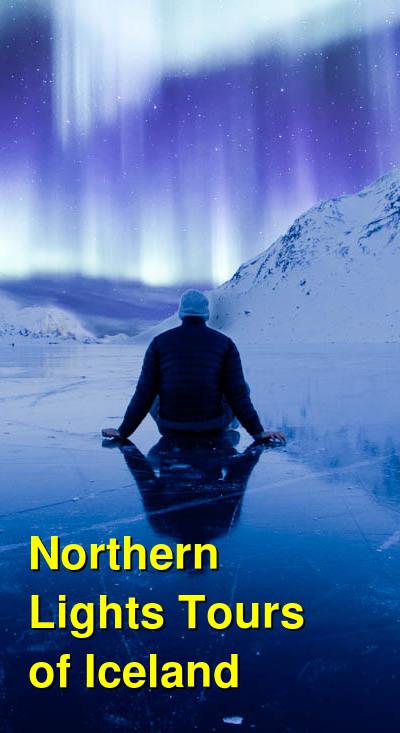