How much does it cost to travel to Azerbaijan?

How much money will you need for your trip to Azerbaijan? You should plan to spend around Ʈ150 ($0.00) per day on your vacation in Azerbaijan, which is the average daily price based on the expenses of other visitors. Past travelers have spent, on average, Ʈ44 ($0.00) on meals for one day and Ʈ32 ($0.00) on local transportation. Also, the average hotel price in Azerbaijan for a couple is Ʈ126 ($0.00). So, a trip to Azerbaijan for two people for one week costs on average Ʈ2,098 ($0.00). All of these average travel prices have been collected from other travelers to help you plan your own travel budget.

A vacation to Azerbaijan for one week usually costs around Ʈ1,049 for one person. So, a trip to Azerbaijan for two people costs around Ʈ2,098 for one week. A trip for two weeks for two people costs Ʈ4,195 in Azerbaijan. If you're traveling as a family of three or four people, the price person often goes down because kid's tickets are cheaper and hotel rooms can be shared. If you travel slower over a longer period of time then your daily budget will also go down. Two people traveling together for one month in Azerbaijan can often have a lower daily budget per person than one person traveling alone for one week.


How expensive is Azerbaijan? How much money do I need for Azerbaijan?

How much does a trip to Azerbaijan cost? Is Azerbaijan expensive? The average Azerbaijan trip cost is broken down by category here. All of these Azerbaijan prices are calculated from the budgets of real travelers.

How much do vacation rentals cost in Azerbaijan? Prices vary by location, date, size of the place, and the level of luxury. See below for options.

How much does it cost to go to Azerbaijan? Naturally, it depends on the dates. We recommend Kayak because they can find the best deals across all airlines.

The price of renting a car in Azerbaijan will depends on dates, the type of car, the location, and your age. We recommend Kayak because they can find the best deals across all car rental companies.

Azerbaijan On a Budget 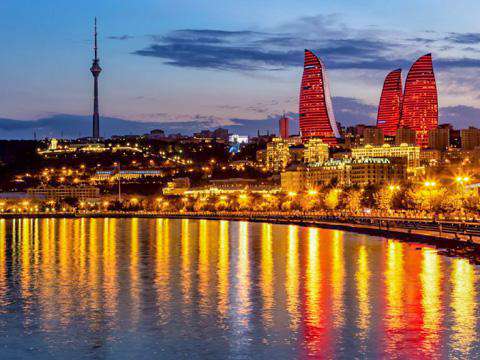 Baku, Azerbaijan
Azerbaijan is one of the countries in the South Caucasus. It is located at the crossroads of Western Asia and Eastern Europe. To the east, it is bordered by the Caspian Sea. Its neighbors are Russia to the north, Armenia to the west, Georgia to the northwest and Iran to the south. Azerbaijan is the youngest republic in the region. The Azerbaijan Democratic Republic was proclaimed an independent country in 1918. Two years later, it became part of the Soviet Union. In 1991, Azerbaijan proclaimed its independence for the second time.

There are different historical facts about Azerbaijan and Azeris. In world history, it is noted that nomadic tribes of Shi'i Muslims living on the territory of modern Azerbaijan were Azerbaijani Turks. Azeri did not have statehood for centuries. The territory was invaded and ruled by Muslim Arabs, Kurds, Seljuk Turks, etc. The territory was occupied by Iran until the Russian Empire established its dominance on the region in 19th century. The collapse of the Russian Empire initiated the formation of nationhood of Azerbaijan.

The greatest value of Azerbaijan is oil. The largest oil-producing regions are located not far from Baku this is why the capital soon got the name of Black Gold capital. Let's skip the details of oil production and its history and say that oil and gas have become a ticket to the world market and made Azerbaijan a strong, powerful and, of course, rich country. The government makes huge investments in the development of all the spheres and mostly tourism.

Though there are few historical monuments on the territory of Azerbaijan, natural sights of the country make it quite an interesting tourist direction. The most attractive destination is Baku, the capital of Azerbaijan. The city presents a mixture of old Caucasus traditions, gray industrial life, and modern technologies. Old town Icheri Sheher is the tourist center of the city with medieval monuments; Maiden's Tower and the palace of Shirvanshahs. One of the most beautiful places in Baku is the city boulevard. In the evening, it is illuminated with thousands of city lights while in the distance you can see bright lights of the Flame Towers.

There is a magical burning mountain in Azerbaijan and it looks so mysterious. Still, this unique natural phenomenon has a scientific explanation. Yanardag is located on the Absheron peninsula. The slope of the mountain is always on fire due to the natural gas emerging from the earth. Nothing can put out the fire no matter how hard you try.

Top tourist attractions are the beaches of the Caspian Sea. The coast in Baku is not suitable for swimming yet the beaches not far from Baku are turned into modern beach resorts.

We think that if you visit only one country of the South Caucasus during your travel you won't manage to feel deeply the all colors of the region. The best option is to have a combined trip around the whole region. We know that there are some agencies that have achieved success in organizing combined Caucasus trips, as an example you can follow this link - araratour.com/armenia-and-georgia.

Just like the culture represents a unique mixture of traditions of neighboring countries, national cuisine is also an interesting blend of dishes. You will find familiar tastes in Azerbaijani cuisine with exotic names.

The key ingredient of traditional cuisine is lamb. Pilaf is the king of dishes in Azerbaijan. There are more than ten types of pilaf cooked with differed spices, greens, vegetable, and meat. Saffron, dill, mint, and coriander are the most common spices used in all dishes.

Traditional Azerbaijani tea is served with national sweets and jam. The tea table is decorated with a plate of colorful jams, nuts, honey, and pastry. Some of the names are familiar with the cuisine of Turkey, Iran, and Armenia.