How much does it cost to travel to Bangladesh?

How much money will you need for your trip to Bangladesh? You should plan to spend around BDT4,540 ($53) per day on your vacation in Bangladesh, which is the average daily price based on the expenses of other visitors. Past travelers have spent, on average, BDT1,143 ($13) on meals for one day and BDT571 ($6.72) on local transportation. Also, the average hotel price in Bangladesh for a couple is BDT5,372 ($63). So, a trip to Bangladesh for two people for one week costs on average BDT63,562 ($747). All of these average travel prices have been collected from other travelers to help you plan your own travel budget.

A vacation to Bangladesh for one week usually costs around BDT31,781 for one person. So, a trip to Bangladesh for two people costs around BDT63,562 for one week. A trip for two weeks for two people costs BDT127,123 in Bangladesh. If you're traveling as a family of three or four people, the price person often goes down because kid's tickets are cheaper and hotel rooms can be shared. If you travel slower over a longer period of time then your daily budget will also go down. Two people traveling together for one month in Bangladesh can often have a lower daily budget per person than one person traveling alone for one week.


How expensive is Bangladesh? How much money do I need for Bangladesh?

How much does a trip to Bangladesh cost? Is Bangladesh expensive? The average Bangladesh trip cost is broken down by category here. All of these Bangladesh prices are calculated from the budgets of real travelers.

Find a hostel, guesthouse, or B&B in Bangladesh

How much does it cost to go to Bangladesh? Naturally, it depends on the dates. We recommend SkyScanner because they can find the best deals across all airlines.

The price of renting a car in Bangladesh will depends on dates, the type of car, the location, and your age. We recommend SkyScanner because they can find the best deals across all car rental companies.

Bangladesh On a Budget

Bangladesh
Located in South Asia, Bangladesh borders the Bay of Bengal, India, and Myanmar. Bangladesh is not the most popular travel destination, but those who venture here are rewarded by a beautiful culture and welcoming people. Although Bangladesh is a poor country, the people welcome foreigners into their homes with genuine hospitality and selflessness. The major industries in the country include ready-made garments, textiles, pharmaceuticals, agriculture, ship building and fishing. The culture dates back thousands of years and the country has much to offer visitors. It has the world's longest beach, man mosques, a large mangrove forest, and many tribal villages. There is also interesting wildlife for those with the patience to seek it out.

Bangladesh has a subtropical monsoon climate with six seasons. These seasons include winter between December and January, spring from February to March, summer during April and May, monsoon through June and July, autumn in August and September, and late autumn in October and November. Although strong cyclones are rare, when they due hit the country they are devastating to the people, infrastructure, and power grid.

Bangladesh sits on the deltas of several large rivers that flow from the Himalayas. This creates a low lying plain that is prone to flooding. The Ganges meets the Jamuna and later joins the Meghna, all of which eventually empty into the Bay of Bengal. The highest point in the country is Bijoy at 1,231 meters above sea level. The rivers ensure that the soil is fertile, so agriculture is a major industry in the country.

The Sundarbans: This UNESCO World Heritage Site is the largest littoral mangrove belt in the world. It covers 80 kilometers and goes through both Bangladesh and India. The area also has some of the last remaining sections of jungle that once covered the Gangetic plain. Today it is a wildlife sanctuary.

Cox's Bazar: This town sits along the longest stretch of sea beach in the world. Covering 120 kilometers of coastline, the gold sand makes this the most popular beach town in Bangladesh. There are high end hotels and many restaurants that are crowded during the peak season between October and March.

St Martin's Island: This is the only coral island in Bangladesh. It's a quintessential tropical island that is lined with coconut palms and a mellow atmosphere. It's a clean and relaxed place to visit and is located in the Chittagong Division about 10 kilometers southwest of the southern tip of the mainland.

Bangladesh cuisine is quite flavorful and often heavily spiced. Rice is a staple throughout the country and mutton is a common meat. Fish, vegetables, lentils, and chicken are also common ingredients. Preparation techniques can vary by region, but the dishes are usually quite good and somewhat comparable to those found in India.

Hilsa: This freshwater fish is considered the "national fish" of Bangladesh. It's many fine bones make it difficult to eat, but the flavor is good if you can get around with bones. It's found throughout the country and there are regional preparation techniques so it's worth trying in different parts of the country.

Korma: Korma is usually made with some form of meat that is cooked in a mild, yogurt based sauce. It is prepared with ghee instead of oil and is often flavored with poppy seed paste. In the south, coconut milk is often added to the dish.

Bhorta: This preparation style is usually done with vegetables such as potatoes, beans, mangoes, papaya, pumpkins and sometimes even dal. The vegetable is boiled and then mashed together with red shallots, chili, mustard oil and other spices. 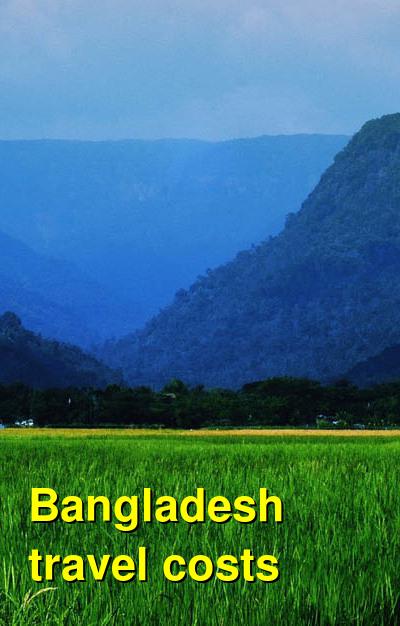