How much does it cost to travel to Bermuda?

How much money will you need for your trip to Bermuda? You should plan to spend around BM$245 ($245) per day on your vacation in Bermuda, which is the average daily price based on the expenses of other visitors. Past travelers have spent, on average, BM$54 ($54) on meals for one day and BM$27 ($27) on local transportation. Also, the average hotel price in Bermuda for a couple is BM$231 ($231). So, a trip to Bermuda for two people for one week costs on average BM$3,431 ($3,431). All of these average travel prices have been collected from other travelers to help you plan your own travel budget.

A vacation to Bermuda for one week usually costs around BM$1,715 for one person. So, a trip to Bermuda for two people costs around BM$3,431 for one week. A trip for two weeks for two people costs BM$6,861 in Bermuda. If you're traveling as a family of three or four people, the price person often goes down because kid's tickets are cheaper and hotel rooms can be shared. If you travel slower over a longer period of time then your daily budget will also go down. Two people traveling together for one month in Bermuda can often have a lower daily budget per person than one person traveling alone for one week.


How expensive is Bermuda? How much money do I need for Bermuda?

How much does a trip to Bermuda cost? Is Bermuda expensive? The average Bermuda trip cost is broken down by category here. All of these Bermuda prices are calculated from the budgets of real travelers.

How much do vacation rentals cost in Bermuda? Prices vary by location, date, size of the place, and the level of luxury. See below for options.

How much does it cost to go to Bermuda? Naturally, it depends on the dates. We recommend Kayak because they can find the best deals across all airlines.

The price of renting a car in Bermuda will depends on dates, the type of car, the location, and your age. We recommend Kayak because they can find the best deals across all car rental companies.

Bermuda On a Budget 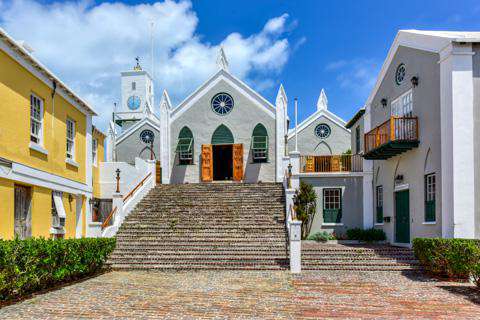 St. George, Bermuda
Located in the Atlantic Ocean, off the coast of North Carolina and north of the Caribbean, Bermuda is a self-governing British overseas territory. It is divided into nine parishes. St. George's Parish is where you will find the historic Town of St. George and the Island of St. David's. The Crystal Caves and the Bermuda Aquarium are located in Hamilton Parish and Smith's Parish has Flatts Village, Spittle Pond Nature Preserve, and Devil's Hole Aquarium. Paget Parish has many resorts as well as Elbow Beach, and Bermuda Botanical Gardens. If you're interested in golf head to Warwick Parish and the best beaches are found in Southampton Parish. Other parishes include Devonshire, Pembroke, and Sandys Parishes.

The City of Hamilton, located in Pembroke Parish, is the capital, while St. George is the historical capital and the oldest surviving English New World town.

Bermuda has a subtropical climate with hot and humid springs, summers, and falls, but cool winters. Water temperatures are also quite cool during the winter months. Similar to the southeastern coast of the United States, the Gulf Stream does keep water temperatures warmer than you might expect.

Town of St. George: This town is the former capital of Bermuda. It is considered the oldest, continually inhabited English settlement in the new world and has been declared a scenic UNESCO World Heritage Site. It dates back to 1612 and has quaint, winding streets that are lined with British Colonial architecture. There are many fountains, gardens, and squares, making it a wonderful place to explore.

Bermuda Maritime Museum: This museum warrants a half a day visit to explore the Royal Naval Dockyard. There are old, limestone storage buildings that have been redeveloped into a tourist attraction and shopping area by the Bermuda Government.

Bermuda Aquarium, Museum, and Zoo: This aquarium offers visitors a 140,000 gallon replica coral reef and is one of the area's most popular attractions. There are more than 300 birds, reptiles and mammals as well as 200 species of fish.

Food in Bermuda takes advantage of the accessible seafood. Dishes are often simple and include boiled rice or black-eyed peas. Chowder is a favorite among locals and tourists. There are also a handful of British pubs around if you want to experience the British influence. Restaurants near the cruise ship docks tend to be the most expensive so if you're looking to save a little money, head further away.

Fish Chowder: This Bermuda favorite is a chowder that is seasoned with a sherry pepper sauce and dark rum. It can be found throughout the territory.

Shark Hash: A unique Bermuda favorite, Shark Hash is made with minced shark meat and spices and is usually served on bread.

Codfish Brunch: This is a traditional Bermudian breakfast. Codfish is boiled with potatoes and Bermuda onions and served with sliced Bermudian bananas. If you stay at a bed and breakfast, you'll likely get to sample this breakfast. Most restaurants also serve a variation of it.