A Travel Price Comparison for Families, Couples, and Backpackers Freeport vs. Grand Cayman for Vacations, Tours, and Honeymoons

Should you visit Freeport or Grand Cayman?

Trying to figure out where to travel next? This travel cost comparison between Freeport and Grand Cayman can help. For many travelers, the cost of a destination is a primary consideration when choosing where to go.

When you picture the Bahamas you likely picture the beaches, resorts and playgrounds of Nassau. Just to the northwest of this tourist paradise is a tropical city founded on industry. Freeport began as mostly swampland and is now the second most populous city in the Bahamas.

This city is less of a tourist attraction - a place where you'll find the true Bahaman culture mixed in with some relaxing spots to help you unwind and get into your island vacation.

When people think of the Cayman Islands, they typically think of offshore bank accounts and sunny, cruise ship ports. Grand Cayman has more to offer travelers than a playground for the wealthy or a short stopover for cruise passengers. This tropical island is the largest of the three Cayman Islands, it is a shopper's heaven, a center for global finance and an ideal vacation spot.

Which city is cheaper, Grand Cayman or Freeport?

The average daily cost (per person) in Freeport is $195, while the average daily cost in Grand Cayman is $171. These costs include accommodation (assuming double occupancy, so the traveler is sharing the room), food, transportation, and entertainment. While every person is different, these costs are an average of past travelers in each city. Below is a breakdown of travel costs for Freeport and Grand Cayman in more detail.

Travelers usually pay around $226 for a double occupancy room in Freeport If you want to be in a premiere location or have high end amenities, you can expect to pay a bit more.

For a normal double-occupancy room in Grand Cayman, $238 is the average cost for a hotel room. Also in Grand Cayman, the typical price for a place to stay for one person is $119, such as in a hostel.

Freeport's transportation costs can vary by the type of transport chosen by visitors. Naturally, taxis and private drivers cost much more than public transportation options. On average, visitors spend $47 per person, per day on transportation in Freeport.


Hired Cars and Shuttles in Freeport

Also for Freeport, here are a few examples of actual transportation services:

Also for Grand Cayman, here are a few examples of actual transportation services:

Is it cheaper to fly into Freeport or Grand Cayman?

Prices for flights to both Grand Cayman and Freeport change regularly based on dates and travel demand. We suggest you find the best prices for your next trip on Kayak, because you can compare the cost of flights across multiple airlines for your prefered dates.

In Freeport travelers spend around $51 a day on food. You can save money by choosing casual restaurants or food stalls, or you can spend plenty more by dining in nicer restaurants at every meal.

While meal prices in Grand Cayman can vary, the average travelers spends about $31 per day on food. Based on the spending habits of previous travelers, when dining out, an average meal in Grand Cayman should cost around $12 per person. Breakfast prices are usually a little cheaper than lunch or dinner. The price of food in sit-down restaurants in Grand Cayman is often higher than fast food prices or street food prices.

For Freeport, here are some samples of tours and activities related to meals and dining experiences:

Sightseeing, admission tickets, things to do, and other entertainment expenses in Freeport can vary widely by price. On average, visitors spend around $32 per person, per day on entertainment and sightseeing here.

Sightseeing, admission tickets, things to do, and other entertainment expenses in Grand Cayman can vary widely by price. On average, visitors spend around $33 per person, per day on entertainment and sightseeing here.

For Freeport, here are some examples of average entertainment and activity prices from previous travelers:

Tours and Activities in Freeport

Also, here are some specific examples of entertainment, tickets, and activities for Freeport.

Tours and Activities in Grand Cayman

For Grand Cayman, here are a few prices for actual activities, tours, and tickets provided by various companies:

Alcoholic beverages can often be a significant portion of a traveler's budget, and the costs can vary greatly from person to person. In Freeport, the average amount that a visitor spends on alcoholic beverages per day is $24.


Sample the Local Flavors in Freeport

Here are a few nightlife and alcohol tours and activities from local tour providers in Freeport:

Below are a few samples from actual travelers for alcohol and nightlife costs in Grand Cayman:

When comparing the travel costs between Freeport and Grand Cayman, we can see that Freeport is more expensive. However, the two cities are actually relatively comparable in price, as the difference is somewhat minimal. Generally, this means that you could travel with generally the same travel style and level of luxury in each place. Since both cities are in Caribbean Islands, it's no surprise that their costs are relatively close, as many destinations here have somewhat similar travel prices overall. 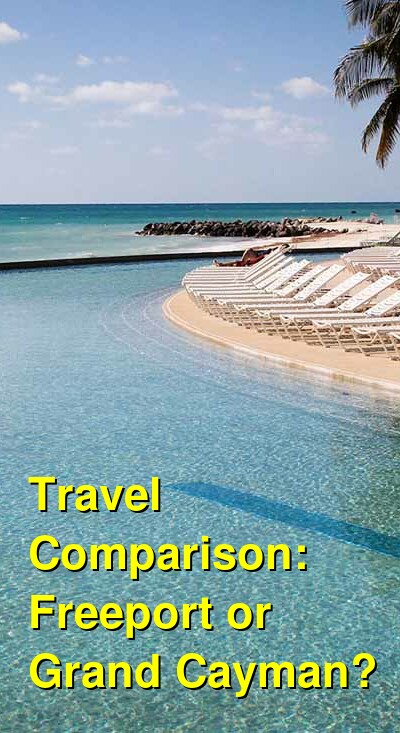