How much does it cost to travel to Accra?

How much money will you need for your trip to Accra? You should plan to spend around GH¢51 ($8.76) per day on your vacation in Accra, which is the average daily price based on the expenses of other visitors. Past travelers have spent, on average, GH¢18 ($3.04) on meals for one day and GH¢17 ($2.90) on local transportation. Also, the average hotel price in Accra for a couple is GH¢36 ($6.24). So, a trip to Accra for two people for one week costs on average GH¢708 ($123). All of these average travel prices have been collected from other travelers to help you plan your own travel budget.

A vacation to Accra for one week usually costs around GH¢354 for one person. So, a trip to Accra for two people costs around GH¢708 for one week. A trip for two weeks for two people costs GH¢1,415 in Accra. If you're traveling as a family of three or four people, the price person often goes down because kid's tickets are cheaper and hotel rooms can be shared. If you travel slower over a longer period of time then your daily budget will also go down. Two people traveling together for one month in Accra can often have a lower daily budget per person than one person traveling alone for one week.


How expensive is Accra?

How much does a trip to Accra cost? Is Accra expensive? The average Accra trip cost is broken down by category here. All of these Accra prices are calculated from the budgets of real travelers.

While meal prices in Accra can vary, the average cost of food in Accra is GH¢18 per day. Based on the spending habits of previous travelers, when dining out an average meal in Accra should cost around GH¢7 per person. Breakfast prices are usually a little cheaper than lunch or dinner. The price of food in sit-down restaurants in Accra is often higher than fast food prices or street food prices.

The cost of a taxi ride in Accra is significantly more than public transportation. On average, past travelers have spent GH¢17 per person, per day, on local transportation in Accra.

How much does it cost to go to Accra? Naturally, it depends on the dates. We recommend SkyScanner because they can find the best deals across all of the airlines.


Find a hostel, guesthouse, or B&B in Accra

Accra On a Budget

Accra
Accra is the capital city of Ghana, located on the Atlantic coast of West Africa. Popular attractions include the National Museum of Ghana, local beaches, markets, and cultural landmarks like those dedicated to Civil Rights activist W.E.B. DuBois.

One of the top attractions of Accra is the National Museum of Ghana, which showcases Ghanaian history and culture from prehistory to the present. Cultural exhibits include artifacts from clothing, thrones, and carvings, to paintings, pottery, and a variety of instruments and tools used in various rituals. Another place of historical discovery is the W.E.B. DuBois Memorial Centre, which houses a research library and gallery of manuscripts dedicated to the Civil Rights activist. His house, grave, and several monuments in honor of DuBois are located throughout the city. Other landmarks include Independence Square, Kwame Nkrumah Memorial Park, The Flagstaff House (the office of the Government of Ghana and the President of Ghana), the Parliament House of Ghana, Accra Sports Stadium, and the Accra Centre for National Culture.

For entertainment, visitors often stop by the National Theatre of Ghana, which is host to the National Dance Company, the National Symphony Orchestra, and the National Theatre Players. The city's foremost historical site is the Jamestown area, which includes the Ussher Fort and James Fort, and Osu Castle (also known as Christiansborg), which was built by Danish settlers in the 17th century. Additional sights include the Cape Coast Castle, which hosts a museum of the trans-Atlantic slave trade, and Manhyia Palace which was built for the local ruler in 1925.

Accra is generally divided into Accra Central, Accra North, Accra East, and Accra West. Making up the heart of the city is Accra Central-home to historic districts, residential districts, the administrative and cultural center, business districts, and the downtown area with plenty of hotels, shopping, and dining opportunities. Makola Market in the downtown encompasses a large boulevard and several alleys full of fabric shops with local goods and crafts like wax prints or embroidered and beaded cotton. Other main attractions of the area include the Kwame Nkrumah Mausoleum, the National Museum, Independence Square, the National Theatre, and the Ohene Djan Stadium. Accra North is a residential and business district with features like The Flagstaff House, several foreign embassies, Achimota School, and Achimota Golf Park. Accra East is largely residential, and Accra West is residential and business, home to the Korle Bu Teaching Hospital landmark.

In addition to cultural and historical attractions within the city itself, Accra also has an Atlantic beachfront. The most popular of the city's beaches is Labadi Beach, which is largely maintained by the local hotels. On holidays and weekends there are often musical performances like reggae as well as cultural drumming and dancing. Kokrobite Beach is also popular, located 25 about kilometers (16 miles) west of Accra. The beachfront area additionally houses the Academy of African Music and Arts.

There are also plenty of opportunities for shopping, not only at the Markola Market mentioned above, but also at the Kaneshie Market which sells mostly traditional items. Other curiosities can be found at the National Cultural Center and Wild Gecko, or, for a modern shopping experience, one can visit the Accra Mall off of Liberation Road.

One of the most popular areas of the city for dining is Osu, a suburb of Accra. Here, there are many trendy restaurants, nightlife, and a wide variety of eateries, hotels, and options for entertainment. With its location on the Atlantic coast of West Africa, Accra also serves up some of the best fresh fish and seafood, straight from the Gulf of Guinea. As far as local cuisine goes, a typical Ghanaian dish is groundnut soup and fufuo. The soup is based on ground peanuts with a blend of ginger, garlic, tomato, hot pepper, and chicken or guinea fowl. It is often served alongside fufuo, a sticky, starchy ball made from pounded cassava, yam, or plantain. Another common element to Ghanaian cooking is jollof rice, which is made in a spicy sauce, much like paella, and served with grilled chicken. Grilled tilapia with banku (cooked fermented corn or cassava dough) is also very popular as is waakye, a lunchtime medley of black-eyed beans and rice, stringy noodles, hardboiled eggs, vegetables, meat, and some fish (usually eel). Waakye is typically served with shitor, a peppery condiment consisting of chili, dried shrimp, and ginger.

Kotoka International Airport is a major hub serving the city. Flights include international connections from North America, Europe, Africa, and the Middle East, as well as internal connections to Kumasi, Tamale, and Takoradi, and regional connections to nearly every West African country. The best way to travel from the airport is via the official taxi stand, though there will also be cars offering more expensive but professional services. Since Accra's attractions are fairly spread out it may be beneficial to hire a car or driver. Taxis are also not metered and visitors will have to haggle with the driver over fares. 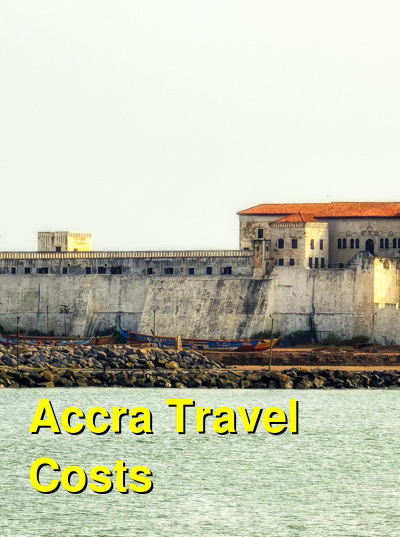