How much does it cost to travel to Greenland?

How much money will you need for your trip to Greenland? You should plan to spend around kr1,420 ($207) per day on your vacation in Greenland, which is the average daily price based on the expenses of other visitors. Past travelers have spent, on average, kr400 ($58) on meals for one day and kr286 ($42) on local transportation. Also, the average hotel price in Greenland for a couple is kr1,558 ($228). So, a trip to Greenland for two people for one week costs on average kr19,876 ($2,904). All of these average travel prices have been collected from other travelers to help you plan your own travel budget.

A vacation to Greenland for one week usually costs around kr9,938 for one person. So, a trip to Greenland for two people costs around kr19,876 for one week. A trip for two weeks for two people costs kr39,752 in Greenland. If you're traveling as a family of three or four people, the price person often goes down because kid's tickets are cheaper and hotel rooms can be shared. If you travel slower over a longer period of time then your daily budget will also go down. Two people traveling together for one month in Greenland can often have a lower daily budget per person than one person traveling alone for one week.


How expensive is Greenland? How much money do I need for Greenland?

How much does a trip to Greenland cost? Is Greenland expensive? The average Greenland trip cost is broken down by category here. All of these Greenland prices are calculated from the budgets of real travelers.

Looking for a hotel in Greenland? Prices vary by location, date, season, and the level of luxury. See below for options.

How much does it cost to go to Greenland? Naturally, it depends on the dates. We recommend Kayak because they can find the best deals across all airlines.

The price of renting a car in Greenland will depends on dates, the type of car, the location, and your age. We recommend Kayak because they can find the best deals across all car rental companies.

Greenland On a Budget 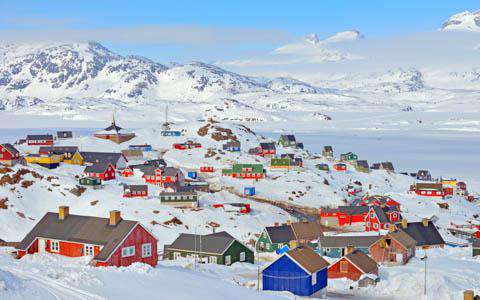 Greenland
Greenland is the largest island in the world that is not its own continent. It is located in the far northeast of North America and is mostly found within the Arctic. It was granted self government from Denmark in 1979 and then more recently voted for autonomy as its own country with only formal ties left to Denmark. Currently, Copenhagen is still responsible for foreign affairs but many people predict that eventually Greenland will have full independence.

Greenland is about the size of Mexico, although looking at it on a flat map can be very misleading, as it looks about the size of Africa. It also has the world's lowest population density. Particularly in the small towns, there are very few signs for restaurants or hotels, so you may have to ask where you can eat or stay. Nobody will mind giving you directions as they likely know where everything is and are often eager to help.

Southern Greenland is jokingly called the "banana coast" by locals as this is where you will experience the least extreme temperatures, although it is still bitterly cold. It is also the most accessible part of Greenland. This area has many beautiful fjords and mountains, as well as flowering plants and fertile land, all next to icebergs and glaciers. Western Greenland is what is typically thought of when one envisions Greenland. There are dogsled trips, houses with with fish and sharkmeat hanging out front, and large icebergs floating in the ocean. Eastern Greenland is sparsely populated, even by Greenland standards and Northern Greenland is predominantly occupied by Northeast Greenland National Park.

Ilulissat Icefjord: This fjord is located in western Greenland and is well worth a visit. It was declared a UNESCO World Heritage Site in 2004.

The Midnight Sun: In the northern two thirds of Greenland there are several days to weeks during the summer months when the sun does not set. The summer solstice, June 21st, is a national holiday. It is a truly unique experience to be somewhere that the sun does not go down. During the winter months the reverse is true and it is always dark.

Cuisine in Greenland is historically made with the meat of marine mammals, game, birds or fish. There is a significant amount of protein in the traditional dishes. After colonization the cuisine was greatly influenced by Danish and Canadian cultures. Restaurants today often have a mix of traditional dishes and more international options. During the summer months it is not uncommon to eat outdoors.

Suaasat: This is the national dish of Greenland. It's a traditional soup that is usually made with either seal or whale, reindeer or sea birds. It also has onions and potatoes and is flavored with salt, pepper and a bay leaf. It can be thickened with either rice or soaked barley.

Ammassat: Seafood in Greenland is often smoked. In particular, this fish is a favorite. It is in the salmon family and is easily dried.

Arfivik: This is a popular dish made with Bowhead whale. The whale meat is smoked and served with onions and potatoes.