How much does it cost to travel to Haiti?

How much money will you need for your trip to Haiti? You should plan to spend around HTG3,783 ($34) per day on your vacation in Haiti, which is the average daily price based on the expenses of other visitors. Past travelers have spent, on average, HTG625 ($5.58) on meals for one day and HTG312 ($2.79) on local transportation. Also, the average hotel price in Haiti for a couple is HTG5,582 ($50). So, a trip to Haiti for two people for one week costs on average HTG52,962 ($472). All of these average travel prices have been collected from other travelers to help you plan your own travel budget.

A vacation to Haiti for one week usually costs around HTG26,481 for one person. So, a trip to Haiti for two people costs around HTG52,962 for one week. A trip for two weeks for two people costs HTG105,925 in Haiti. If you're traveling as a family of three or four people, the price person often goes down because kid's tickets are cheaper and hotel rooms can be shared. If you travel slower over a longer period of time then your daily budget will also go down. Two people traveling together for one month in Haiti can often have a lower daily budget per person than one person traveling alone for one week.


How expensive is Haiti? How much money do I need for Haiti?

How much does a trip to Haiti cost? Is Haiti expensive? The average Haiti trip cost is broken down by category here. All of these Haiti prices are calculated from the budgets of real travelers.

How much do vacation rentals cost in Haiti? Prices vary by location, date, size of the place, and the level of luxury. See below for options.

How much does it cost to go to Haiti? Naturally, it depends on the dates. We recommend Kayak because they can find the best deals across all airlines.

The price of renting a car in Haiti will depends on dates, the type of car, the location, and your age. We recommend Kayak because they can find the best deals across all car rental companies.

Haiti On a Budget 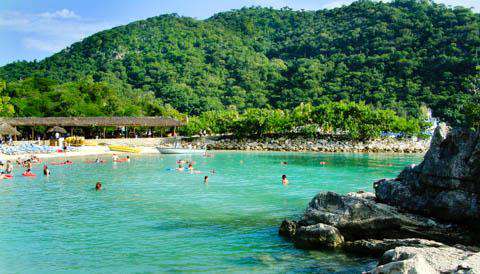 Labadee, Haiti
Haiti is an island in the Caribbean, sharing the island with the Domincan Republic with the Caribbean Sea in the south and the Atlantic Ocean in the north. Haiti has a rich culture and is often considered to be a hidden gem of the Caribbean. Albeit the country's reputation for poverty and dangerous cities, Haiti's resort areas and major cities are safe enough for tourists, with the help of a guide. The language of Haiti is Creole and few people outside of the resorts speak English. Haiti experiences regular intense storms from June-November, making December-April the ideal times to visit when temperatures are in the 70's and 80's Fahrenheit and rain is minimal.

Haiti's beautiful culture is not to be missed, one of the best places to experience this is at the Marche an Fer flea market in Port-au-Prince where you'll find crafts, produce, and clothing. Just be sure to bring a guide with you who speaks Creole to help you negotiate prices and navigate the busy market. You can also use the Tour Haiti travel company located in Port-au-Prince to help you plan a trip to explore the French Colonial era architecture and other major sights around the island such as the La Citadelle and Palais San Souci. The Citadelle is the largest fortress in the western hemisphere and features cannonballs and old weaponry along with beautiful views of the island. The Palais Sans Souci is the ruins of King Henri Christophe's Versace styled castle which was built in 1813 and became a World Heritage Site in 1982.

Cities in Haiti range from resort villages to large, crowded cities. Port-au-Prince is Haiti's largest city and also the country's capital. You'll find the majority of hotels, beaches, and festivals here. Jacmel is a village that's fairly new to the tourism scene and is popular among backpackers thanks to it's laid back vibe and strong cultural and artistic ties. Ila a Vache is small island off the coast and is home to many resorts. Another resort city is Labadee, which is an entirely fenced off area that has its own personal port for cruise ships. Finally, there is Petionville, a high end suburb or Port-au-Prince and considered much safer than the city center.

Haiti offers gorgeous beaches where you can enjoy a swim in the cool waters, waterskiing, jet skiing, or just relax on the sand. For more swimming opportunities, check out the Bassin Bleu in the city if Jacmel where you can swim in the bright blue water and under the beautiful waterfall there. Once you've had enough swimming, go for a hike up Furcy Forest located near Jacmel where you can climb up the mountains to get incredible views of the surrounding island. Haiti is also well known for their Carnival celebrations which happen around Mardi Gras every year and combine local customs such as Voodoo and Haitian music with the traditional parade atmosphere of Carnival.

Haiti has two airports, the Toussaint L'Ouverture and the International Cap-Haitien which are both located near Port-au-Prince. You can take a taxi from the airport to your destination or arrange for a shuttle bus from your hotel to pick you up. You can enter Haiti through it's neighboring country, the Dominican Republic, although it can be confusing and you should have a Haitian guide with you to help you translate. One of the easiest ways to get around Haiti is by private chauffer which you can usually find with the help of your hotel. Chauffeurs often act as both interpreters and guides, helping you find the best places to eat and show you hidden gems around the island. You can try to get around on the Tap Taps, which are modified trucks and buses, although they tend to get overcrowded and can be difficult to navigate without the help of a guide.

Haitian food is a blend of French and African cuisine that features strong spices. Some popular dishes include roast goat called kabrit, fried pork called griot, and poulet creole which is chicken with a special creole sauce. On the coastal cities, you'll find fish and lobster infused with creole flare. You'll find delicious exotic fruit in Haiti, including guava, pineapple, mango, and banana. If you're a fan of rum, check out the Barbancourt distillery where you can try samples of their rum and pick up a few bottles to take home. Take extreme caution when it comes to the tap water in Haiti, it is often contaminated. Drink only bottled water and be mindful of any produce or meals made with the tap water.