How much does it cost to travel to Akureyri?

How much money will you need for your trip to Akureyri? You should plan to spend around kr15,647 ($110) per day on your vacation in Akureyri, which is the average daily price based on the expenses of other visitors. Past travelers have spent, on average, kr3,992 ($28) on meals for one day and kr2,263 ($16) on local transportation. Also, the average hotel price in Akureyri for a couple is kr20,150 ($141). So, a trip to Akureyri for two people for one week costs on average kr219,061 ($1,536). All of these average travel prices have been collected from other travelers to help you plan your own travel budget.

A vacation to Akureyri for one week usually costs around kr109,531 for one person. So, a trip to Akureyri for two people costs around kr219,061 for one week. A trip for two weeks for two people costs kr438,123 in Akureyri. If you're traveling as a family of three or four people, the price person often goes down because kid's tickets are cheaper and hotel rooms can be shared. If you travel slower over a longer period of time then your daily budget will also go down. Two people traveling together for one month in Akureyri can often have a lower daily budget per person than one person traveling alone for one week.


How expensive is Akureyri? How much money do I need for Akureyri?

How much does a trip to Akureyri cost? Is Akureyri expensive? The average Akureyri trip cost is broken down by category here. All of these Akureyri prices are calculated from the budgets of real travelers.

Looking for a hotel in Akureyri? Prices vary by location, date, season, and the level of luxury. See below for options.

How much does it cost to go to Akureyri? Naturally, it depends on the dates. We recommend Kayak because they can find the best deals across all airlines.

The price of renting a car in Akureyri will depends on dates, the type of car, the location, and your age. We recommend Kayak because they can find the best deals across all car rental companies.

ReykjavikHofnHostels for Groups in ReykjavikThe Best Hostels in Iceland for Backpackers, Students, and Budget Travellers

Akureyri On a Budget 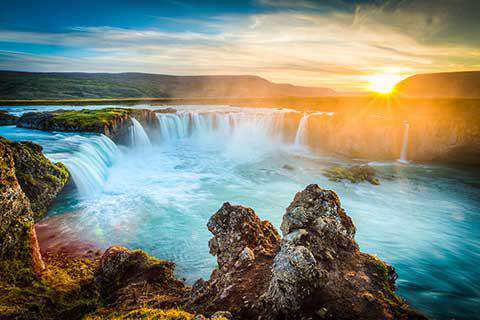 Godafoss Waterfall
Akureyri is the largest town in the northern region of Iceland, and is often considered the unofficial capital of the north. The town is a popular fishing port and is often used as a basecamp for visiting the more rural surrounding area. Akureyri is known for their great art scene, beautiful architecture, and stunning natural scenery.

The climate in Akureyri tends to be cold and wet year round, with temperatures rarely going above 60° Fahrenheit. Temperatures tend stay between 20-30° F from October-April, with the most snowfall and rainfall happening during this time. May-August tend to be drier and slightly warmer, with temperatures in the 40's and 50's.

Akureryi offers a fantastic art scene, especially in the Listagilio which translates to art canyon, is an area full of art galleries and shops. After wandering through Listagilio, you can follow the winding lanes of the town and enjoy the eclectic buildings. One such building is the Akureyrakirkja Church whose 1940's architecture juxtaposes that of the more traditional surrounding buildings.

Explore the city's history at Gasir, a medieval trading post which comes to life in July when locals recreate what it would have been like hundreds of years ago. From here, you can head to the Laufus, an old rectory from the 1840's that are often considered to be the inspiration for Icelandic architecture.

Akureyri is a fairly small city, despite it being the largest town in the northern region of Iceland. It does have a downtown, or town center, where you'll find beautiful architecture, art galleries, tourist offices, and restaurants. Outside of the town center, on the outskirts of the city, is the conference center and a few of the natural attractions.

Located far north of Akureyri is Grimsey Island, which is home to fisherman and about one million seabirds! Aside from it's stunning natural landscape, Grimsey is a great place to experience crossing the Arctic Circle.

About 20 miles north of Akureyri is Hrisey Island, a beautiful little island with a small village. There are three walking trails, amazing viewpoints for bird watching, and even tractor tours during the summer.

Some of the best activities in Akureyri involve taking advantage of the incredible natural surroundings, especially at Glerardalur Valley. The Valley is surrounded by some of the highest mountains in Iceland with the Glera River running through it. You can get a map of the area from The Touring Company in Akureyri, who will also be able to tell you the best viewing points and difficulty level of each trail!

During winter, you can ski at the nearby Eyjafjordur Fjord, which is great for both cross-country and downhill skiing. In the summer, head over to Sulur Mountain where you can spend the day hiking and exploring the area while also getting breathtaking views of Akureyri. At the end of summer, in early September, there's the annual Arctic Run on Grimsey Island which is the only run in the world where you cross the Arctic Circle! Then, end running day with a viewing of the Northern Lights which can be viewed in Akureyri from September through April.

Being a major fishing port, you'll find incredibly fresh seafood wherever you go in town. There is also a strong emphasis on using natural, organic, Icelandic ingredients at many of the restaurants throughout the area. Restaurants in Akureyri vary from pub food, to fish and chip shops, to more international fare like Spanish tapas. The city also has a lively nightlife scene, with almost as many bars and clubs as there are restaurants! Bars range from discos to low-key pubs to swanky lounges.

Akureyri is connected via the ring road, which is the single highway that runs around the country. Using a rented car or taking a bus from Reykjavik or Egilsstaoir are some of the easiest ways to get into the city. There is also a domestic airport nearby which takes flights from Air Iceland, as well as occasional flights from Copenhagen.

You can easily navigate Akureyri on foot or use their free bus system, SVA. Keep in mind, the buses often have limited hours, especially on weekends, so walking is usually the most efficient option. There are just a few taxis in town which you can find at the taxi post in the center of town.

Train and Bus Prices
The best prices for buses and trains in Iceland can be found on Omio (formerly GoEuro). They let you search across all train, bus, and plane routes throughout the region.