How much does it cost to travel to Kazakhstan?

How much money will you need for your trip to Kazakhstan? You should plan to spend around KZT7,986 ($17) per day on your vacation in Kazakhstan, which is the average daily price based on the expenses of other visitors. Past travelers have spent, on average, KZT2,315 ($5.03) on meals for one day and KZT276 ($0.60) on local transportation. Also, the average hotel price in Kazakhstan for a couple is KZT5,686 ($12). So, a trip to Kazakhstan for two people for one week costs on average KZT111,806 ($243). All of these average travel prices have been collected from other travelers to help you plan your own travel budget.

A vacation to Kazakhstan for one week usually costs around KZT55,903 for one person. So, a trip to Kazakhstan for two people costs around KZT111,806 for one week. A trip for two weeks for two people costs KZT223,611 in Kazakhstan. If you're traveling as a family of three or four people, the price person often goes down because kid's tickets are cheaper and hotel rooms can be shared. If you travel slower over a longer period of time then your daily budget will also go down. Two people traveling together for one month in Kazakhstan can often have a lower daily budget per person than one person traveling alone for one week.


How expensive is Kazakhstan? How much money do I need for Kazakhstan?

How much does a trip to Kazakhstan cost? Is Kazakhstan expensive? The average Kazakhstan trip cost is broken down by category here. All of these Kazakhstan prices are calculated from the budgets of real travelers.

Looking for a hotel in Kazakhstan? Prices vary by location, date, season, and the level of luxury. See below for options.

How much does it cost to go to Kazakhstan? Naturally, it depends on the dates. We recommend Kayak because they can find the best deals across all airlines.

The price of renting a car in Kazakhstan will depends on dates, the type of car, the location, and your age. We recommend Kayak because they can find the best deals across all car rental companies.

Kazakhstan On a Budget 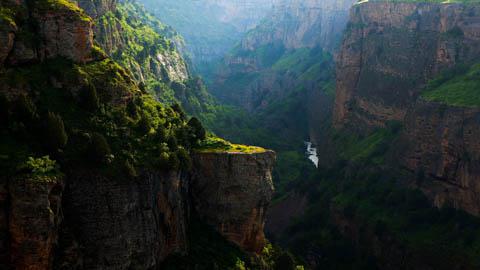 Kazakhstan
From astounding cathedrals to breathtaking landscapes, Kazakhstan is often overlooked by many tourists. However, within its borders, exquisite architecture and amazing historical landmarks adorn the country. The ninth largest country in the world, Kazakhstan is home to over 131 ethnicities as well as a wide variety of religions, making the land enriched by culture and tradition. This former Soviet republic is one of the most economically developed countries throughout Central Asia, generating 60% of the region's GDP, primarily through its oil/gas industry. This allows for higher standards to be placed upon such accomodations as restaurants or transport. As you travel through the glimmering metropolitan areas of its capital, Astana, and its most popular city, Almaty, you will be amazed at how Europe has influenced the country so generously, with its leafy avenues, chic cafes, glossy shopping centres, and partying nightlife. When in the cities of Kazakhstan, you will find the number of adventures you can have is seemingly endless.

However, if you are adventurous enough to move beyond the futuristic skyscrapers and dazzling towers, you will find yourself equally amazed. Kazakhstan is known for its biodiversity, with its terrain acquiring flatlands, steppe, taiga, rock canyons, hills, deltas, snow-capped mountains, and deserts. Engage in your favorite winter sports at the Medeu Skating Rink and Ski resort. With a to-die-for view of Kazakhstan's true beauty, feel free to skate and ski amidst the snowy mountaintops. If you venture to the bottom of these endless mountains, you will find the land is equally as beautiful, such as the Big Almaty Lake. A stunning spot for a picnic, the Big Almaty Lake is located 28.5 kilometers south of Almaty, up a gorge of the Bolshaya Almatinka River. Sit back and relax as you take in the full serenity of Kazakhstan's natural world.

In Kazakhstan, you can use taxis, buses, trains and planes to get wherever you need to go. If you are traveling within highly populated areas, taking the bus is a cheap way to get around. Nevertheless, due to its popularity, be prepared for the bus to be crowded. It can also be quite inconvenient as none of the bus systems stick to a given schedule. Knowing and speaking Russian is definitely a plus, but is not needed. Taxis, however, are far more convenient than buses and are relatively cheap. Often times, you do not even need to use proper taxis as most drivers are willing to pull over if you raise your hand. While this works best in Almaty and Astana, when it comes to places like Karagandy, it is best to order a taxi over the phone.

Trains are also quite popular in Kazakhstan as they cover huge distances between Kazakhstan's main cities. Main train stations are located in Astana, Karaganda and Almaty, but they can be found almost in every major metropolitan area. Kazakhstan's ticket and reservation system is astoundingly similar to that of Russia's, though the price is relatively cheaper in Kazakhstan. Most travelers agree that the train is the most fun way to travel as you are able to meet new people and enjoy the rolling landscape. Be sure to remember when traveling that Kazakhstan is a big country, with the average amount of time between cities like Almaty and Astana being 24 hours. If you are looking for a fast way to travel, going by plane is not a bad option if you can afford it. Air Astana provides offices in a few major hotels in big cities, or you can reserve your ticket online. Similar to the rest of Europe, airline standards are top-tier. 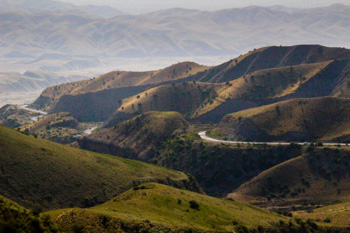 The Pamir Highway
If you are into overlanding, then you might want to check out the M1 highway - also known as the Pamir Highway. One of the highest highways in the world, this one takes you right past the Pamir Mountains and through multiple countries in Central Asia. You can witness the beauties of Uzbekistan, Afghanistan, Kyrgyzstan, and Tajikistan, and you won't even have to get off the main road.

This highway is not your typical road, as it doesn't go on a straight line as many others do. It has many side trips and detours - but on the plus side, you have several magnificent views and impressive colorscapes. Not only will this highway take you through the beautiful natural Central Asia, but it will also introduce you to the culture.

Here are the stops that you may make while you are on the highway:

Nurek Lake: If you start from Dushanbe and take your ride to Osh, then Nurek Lake should be one of the first stops. Indeed, you won't be getting very close to the actual lake, but the view you'll get is still spectacular.

Khorog: Going further on the Pamir Highway, you will come across the beautiful city of Khorog. Plus, if you are fortunate enough to explore this beautiful city in July, you may even witness the Roof of the World Festival.

Wakhan Corridor: This narrow strip connects Afghanistan to China while separating Pakistan from Tajikistan. It is packed with beautiful valleys and mountain views, making it the perfect choice for adventurers and nature enthusiasts.

The Pamir Highway is a great place to go through if you are looking for excitement and beautiful landscapes. You have mountains, lakes, towns - everything that would leave your mouth gaping - and all you need is a 2 or 3-day timeframe.

Zenkov Cathedral: Without using any nails and purely made from wood, the Zenkov Cathedral works as one of the most spellbinding landmarks of Kazakhstan. Located in Panfilov Park, visitors are allowed to enter but should be weary of the customs of the church out of respect. Its elaborate architecture is truly worth the trip if you are in Almaty.

Bayterek Tower: One of the most unique sights in Kazakhstan, the architecture of Bayterek Tower acquires a meaning that is truly unique. Symbolizing the legend of the golden egg on top of the tree of life, this unusual construction has been a hotspot for tourists across the globe who seek to marvel at the 97-meter tower. Observe the collision of old and new traditions as the dated legend is brought to amazing life through the Bayterek Tower.

Kok-Tobe Hill: Take a cablecar and watch the natural beauty of Kazakhstan unfold beneath your feet. Those scared of heights should be wary of this ride as the cablecar is known to slightly swing due to the strong winds. Get an amazing view of Almaty and stop at the few souvenir shops, amusement park, and zoo when you get off.