How much does it cost to travel to Lesotho?

How much money will you need for your trip to Lesotho? You should plan to spend around LSL922 ($57) per day on your vacation in Lesotho, which is the average daily price based on the expenses of other visitors. Past travelers have spent, on average, LSL417 ($26) on meals for one day and LSL146 ($9.00) on local transportation. Also, the average hotel price in Lesotho for a couple is LSL657 ($40). So, a trip to Lesotho for two people for one week costs on average LSL12,908 ($794). All of these average travel prices have been collected from other travelers to help you plan your own travel budget.

A vacation to Lesotho for one week usually costs around LSL6,454 for one person. So, a trip to Lesotho for two people costs around LSL12,908 for one week. A trip for two weeks for two people costs LSL25,817 in Lesotho. If you're traveling as a family of three or four people, the price person often goes down because kid's tickets are cheaper and hotel rooms can be shared. If you travel slower over a longer period of time then your daily budget will also go down. Two people traveling together for one month in Lesotho can often have a lower daily budget per person than one person traveling alone for one week.


How expensive is Lesotho? How much money do I need for Lesotho?

How much does a trip to Lesotho cost? Is Lesotho expensive? The average Lesotho trip cost is broken down by category here. All of these Lesotho prices are calculated from the budgets of real travelers.

Find a hostel, guesthouse, or B&B in Lesotho

How much does it cost to go to Lesotho? Naturally, it depends on the dates. We recommend SkyScanner or Kayak because they can find the best deals across all airlines.

Lesotho On a Budget

Lesotho
Lesotho is a unique little country, made mostly of mountains, and completely surrounded by South Africa. Known as the "Kingdom in the Sky" because of its high altitude, it has the highest lowest point of any country in the world. It is crisscrossed by a network of rivers and mountains, with opportunities for seeing beautiful waterfalls, impressive cave dwellings, rock art, dinosaur footprints, and the ruins of a 19th century kingdom.

Maseru is the capital city of Lesotho, located on its northwestern border with South Africa. As far as attractions go, the city is more of a home base for expeditions and travels deeper into the country. Hlotse, also known as Leribe, is located a bit further north and serves as a regional market hub - a great place for craft shopping and stocking up before venturing into the Highlands. Teyateyaneng is another important market for locally made crafts, while Quthing in the south is known to be near impressive rock and cave art of the San people.

As far as the landscape goes, Lesotho's topography changes from lowlands in the west, to foothills, and then mountains which make up most of the country's eastern half. Then there is also the Senqu River Valley at the junction of the Makhaleng and Orange rivers in the south.

Lesotho's high altitude and rugged terrain draw many visitors for outdoor activities, especially hiking. Hiking in the country's highlands is not for the inexperienced, and having a guide is preferable. The Department of Tourism can find you a guide, who can then navigate the way, often staying in remote villages overnight. Guided trekking and climbing in the Maluti/ Drakensberg mountains is another common venture, which can be planned through GoVertical Mountaineering Adventures.

If trekking on foot is not what you have in mind, pony-trekking is also available at either Malealea, Semonkong, or at the Basotho Pony-Trekking Centre. It's a great way to see the Lesotho countryside as the ponies can navigate where the cars cannot, through far-off villages and steep mountainsides.

When wintertime does come, the slopes at Oxbow are also well-frequented by visitors.

The striking landscape of Lesotho's highlands is truly one of the top attractions in the country. As mentioned earlier, one can see the rugged countryside on foot, bicycle, or by pony. The mountains are grand enough, but there are also a few hidden gems nestled within them.

Sani Pass: The high road up to Sani Top is the highest pass in South Africa and crosses the border between S.A. and Lesotho. This is a great trip to make because of the stunning views, rugged terrain, and physical challenge. Read this great article about taking a road trip to Sani Pass, Lesotho.

Kome Caves: Built by the Basotho people to hide from cannibals, these impressive cave dwellings are a sight not to be missed. They are located about an hour's drive from Maseru in the Berea district.

Maletsunyane (Semonkong) Falls: Located near the small town of Semonkong in central Lesotho, these falls drop 200 meters in one great plunge. In the summertime the pond that lies below is popular for swimming, while in the winter the waterfall freezes into a single column.

Rock Art and Dinosaur footprints: Evidence of prehistoric times lies preserved in the landscape of Lesotho as well. The most accessible of the dinosaur footprints can be seen near the towns of Moyeni and Morija, while some of the most impressive rock art can be found within Liphofung Cave.

Cuisine of the Basotho people is ingrained in African tradition with some British influences as well. It also tends to share certain culinary practices with its neighbor, South Africa, with ingredients largely consisting of potato, seafood, rice, vegetables, and corn based dishes. Most dishes contain sauces, though less spicy than other countries in Africa, and beetroot salad is a common side dish. Oxtail stews, peanut stews, curries, and kabobs are also very traditional. Ginger beer, local brews, and ting or fermented porridge are popular beverages.

Mieliepap: A traditional porridge or polenta made from mielie-meal (a ground maize). Different variations have different consistencies and textures like the smooth slap pap, the thicker stywe pap, and the more crumbly phuthu pap. The pap is usually accompanied by savories like green vegetables flavored with chili, or served with meat and a kind of tomato stew. It is also a common breakfast staple, usually eaten with milk, butter, and sugar. (recipe here)

By plane, Moshoeshoe I International Airport serves the capital city of Maseru. South African Airways and Airlink operate daily flights between Maseru and Johannesburg. It is important to arrange a taxi in advance as there are none at the airport.

As Losotho is surrounded on all sides by South Africa, by car you will be entering from South Africa. The major border posts are Caledonspoort, Ficksburg Bridge, Makhaleng Bridge, Maseru Bridge, Ngoangoma Gate, Peka Bridge, Qacha's Nek, Ramatseliso's Gate, Sani Pass, Sephaphos Gate, Tele Bridge and Van Rooyen's Gate. Be aware that gas is scarce, and the terrain may be rugged.

By bus, Vaal-Maseru runs a coach service between Johannesburg and Maseru. 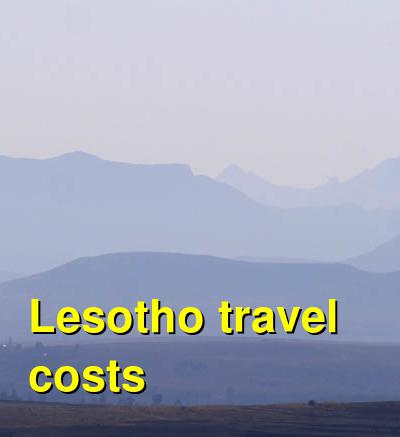