How much does it cost to travel to Luxembourg?

How much money will you need for your trip to Luxembourg? You should plan to spend around €147 ($155) per day on your vacation in Luxembourg, which is the average daily price based on the expenses of other visitors. Past travelers have spent, on average, €64 ($68) on meals for one day and €10 ($11) on local transportation. Also, the average hotel price in Luxembourg for a couple is €142 ($150). So, a trip to Luxembourg for two people for one week costs on average €2,060 ($2,176). All of these average travel prices have been collected from other travelers to help you plan your own travel budget.

A vacation to Luxembourg for one week usually costs around €1,030 for one person. So, a trip to Luxembourg for two people costs around €2,060 for one week. A trip for two weeks for two people costs €4,121 in Luxembourg. If you're traveling as a family of three or four people, the price person often goes down because kid's tickets are cheaper and hotel rooms can be shared. If you travel slower over a longer period of time then your daily budget will also go down. Two people traveling together for one month in Luxembourg can often have a lower daily budget per person than one person traveling alone for one week.


How expensive is Luxembourg? How much money do I need for Luxembourg?

How much does a trip to Luxembourg cost? Is Luxembourg expensive? The average Luxembourg trip cost is broken down by category here. All of these Luxembourg prices are calculated from the budgets of real travelers.

How much do vacation rentals cost in Luxembourg? Prices vary by location, date, size of the place, and the level of luxury. See below for options.

How much does it cost to go to Luxembourg? Naturally, it depends on the dates. We recommend Kayak because they can find the best deals across all airlines.

The price of renting a car in Luxembourg will depends on dates, the type of car, the location, and your age. We recommend Kayak because they can find the best deals across all car rental companies.

Luxembourg On a Budget 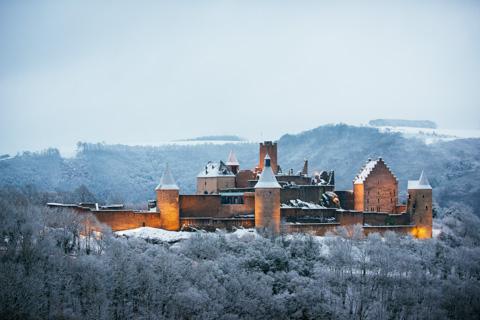 Luxembourg
Luxembourg is a completely landlocked country located in the Benelux. It is bordered by Belgium, France and Germany. It's location make it a mixing bowl of the Germanic and Latin cultures. Luxembourg is the only remaining grand duchy in the world. A grand duchy, also referred to as a grand dukedom, is a territory that is headed by a monarch who is either a grand duke or grand duchess. Luxembourg is also the second smallest state in the European Union.

The economy in Luxembourg is based on steel, finance and technology. This economy thrives, in part, because of its location in the middle of Western Europe near many influential economies. It is one of the top three richest countries in the world, and the cost of living and travel expenses reflect this. The country also packs a surprising amount of natural beauty into its small space, making it a fascinating and fun place to visit.

The climate in Luxembourg is similar to that found in nearby countries. Winters may be mild, but January and February are the coldest months and temperatures can fall to -15 degrees Celsius. Summer can be quite hot, with July and August being the hottest months. It is not uncommon for temperatures to reach about 30 degrees Celsius. Summer is the peak season for travel but the most comfortable times to visit is during the spring and fall months. Luxembourg's National Day is on June 23rd.

Luxembourgs terrain is mostly made up of gently rolling hills and valleys. The northern area becomes slightly mountainous and there is a steep slope down to Moselle flood plain in the south.

City of Luxembourg: This historic city is a must-see. The old town has a large number of sites including the Gothic Revival Cathedral of Notre Dame, the town fortifications and the Grand Ducal Palace. Several areas in the old town are UNESCO World Heritage Sites and the cobbletoned streets, historic architecture, and impressive setting high on a cliff all make the city a unique place to visit.

Echternach: This is the oldest city in Luxembourg and is also home to the basilica of the Abbey of Echternach. This is where the patron saint of Willibrord is buried. Echternach is also perfectly located to serve as a base for exploring Mullerthal. There are plenty of places to hike, bike and explore.

Vianden This village has the medieval Beaufort castle, which is a popular destination for tourists. It can get quite crowded in the summer, but is well worth a visit as it is nicely situated within the forest, near a lake with swans. The fairy tale setting make it a romantic and beautiful place to wander.

Luxembourg cuisine includes large amounts of pork and potatoes. It is heavily influenced by the cuisines of Germany and central Europe, but French pastries are common throughout as well. Local restaurant often have French entrees available and Italian food is often available at any of the many Italian restaurants.

Judd Mat Gaardebounen: This is the unofficial national dish of Luxembourg. It is smoked pork neck that is served with boiled broad beans and often has potatoes on the side. It goes perfectly with a local beer on the side.

Gromperekichelchen: Translated to mean "Potato Biscuits", this dish is a fried shredded potato cake. It is made with onions, shallots and parsley and is commonly served at outdoor events such as fairs, festivals or markets. It makes for an excellent snack on a cold winter day.

Eisleker Ham: This ham is served cold and common in the mountainous northern region. The ham is marinated for several weeks before it is smoked for a few days. It is sliced thinly and served with chipped potatoes and salad.