How much does it cost to travel to Macao?

How much money will you need for your trip to Macao? You should plan to spend around MOP936 ($117) per day on your vacation in Macao, which is the average daily price based on the expenses of other visitors. Past travelers have spent, on average, MOP136 ($17) on meals for one day and MOP3.75 ($0.47) on local transportation. Also, the average hotel price in Macao for a couple is MOP1,460 ($182). So, a trip to Macao for two people for one week costs on average MOP13,106 ($1,633). All of these average travel prices have been collected from other travelers to help you plan your own travel budget.

A vacation to Macao for one week usually costs around MOP6,553 for one person. So, a trip to Macao for two people costs around MOP13,106 for one week. A trip for two weeks for two people costs MOP26,211 in Macao. If you're traveling as a family of three or four people, the price person often goes down because kid's tickets are cheaper and hotel rooms can be shared. If you travel slower over a longer period of time then your daily budget will also go down. Two people traveling together for one month in Macao can often have a lower daily budget per person than one person traveling alone for one week.


How expensive is Macao? How much money do I need for Macao?

How much does a trip to Macao cost? Is Macao expensive? The average Macao trip cost is broken down by category here. All of these Macao prices are calculated from the budgets of real travelers.

Find a hostel, guesthouse, or B&B in Macao

Typical prices for Transportation in Macao are listed below. These actual costs are from real travelers and can give you an idea of the Transportation prices in Macao, but your costs will vary based on your travel style.

How much does it cost to go to Macao? Naturally, it depends on the dates. We recommend SkyScanner because they can find the best deals across all airlines.

The price of renting a car in Macao will depends on dates, the type of car, the location, and your age. We recommend SkyScanner because they can find the best deals across all car rental companies.

Typical prices for Entertainment in Macao are listed below. These actual costs are from real travelers and can give you an idea of the Entertainment prices in Macao, but your costs will vary based on your travel style.

Macao On a Budget

Macau
Located in China, Macau is a Special Administrative Region and one of the world's most densely populated regions. Until 1999 it remained an overseas territory of Portugal. It sits across from Hong Kong, along the Pearl River Estuary. Because it was so recently relinquished as a colony, it still has a significant amount of visible colonial history. The old city still looks very European, which you can see during a walking tour. Despite this architectural influence, the majority of the city's population is native Chinese.

In addition to the city itself, Macau also includes the islands of Taipa and Coloane. These islands are connected to Macau by bridges, and they are connected to each other by a causeway. This causeway is known as the Cotai Strip. Taipa has a major residential area and also houses Macau's international airport. Coloane is less developed and has mountainous terrain. There are a couple of beaches and a few hiking trails you can explore. There is also a resort and golf course. Cotai Strip is where you will find many of Macau's casinos. Many of these are large and western in style.

Macau's climate is subtropical and the summers are hot but the winters are mild. Mid-summer to autumn is typhoon season and a major typhoon can shut down the city. It is best to plan your visit accordingly.

Rua da Tercena: This street is located near St Paul's Cathedral behind Senado Square. It's a little out of the way so it avoids some of the tourist crowds but still offers unique art, architecture and flea markets. It has a great character and is a wonderful place to take a stroll.

Macau Heritage Walk: A large part of the Macau Peninsula has been designated as a UNESCO World Heritage site and the best way to explore it is by doing the Macau Heritage Walk. This walk will take you by many of the historic buildings, the Sao Paulo Cathedral, the Fort and the Macau Museum.

Bodhisatta Avalokitesvara: This statue is an interesting combination of Chinese and European cultures. It's located next to the sea near the Sands Casino and MGM Grand and it shows a Chinese deity in a distinctly European design that can even be compared to statues of the Virgin Mary in Europe.

Despite Macau's Portuguese history, it can be difficult to find authentic Portuguese food away from the high end restaurants. Instead, stick to the Macanese and Chinese cuisines, which are excellent and ubiquitous. In general Macanese food has been influenced by the Portuguese and Chinese as well as African and Southeast Asian traders.

Pato de Cabidela: This is a traditional Portuguese dish that can be found at a variety of restaurants in Macau. It is a stew that is made of chicken with blood and herbs. It is usually served with rice. Although it sounds a little intimidating, it's actually quite good.

Galinha a Portuguesa: Although the name, Portuguese-style chicken, makes you believe it has Portuguese origins, this dish is actually completely Macanese. It is a chicken that is served with a coconut curry and it can be found throughout the city.

Beef Jerky: Beef Jerky can be found on the street that leads up to the Ruins of St. Paul. There are vendors around who will gladly hand out free samples. Make sure you try it before you buy, as the quality can vary. In general, this jerky is more moist and fresh than most jerky outside of Macau. 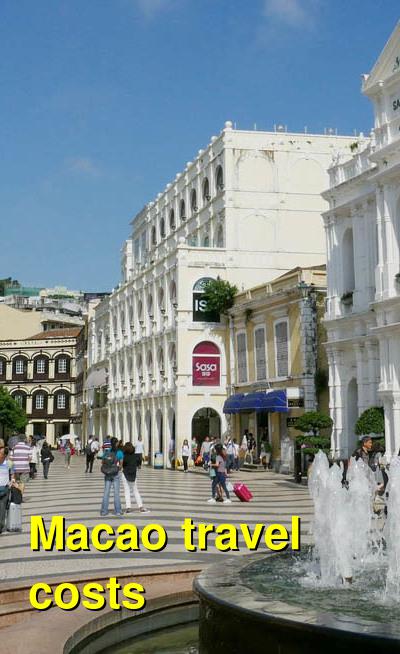