How much does it cost to travel to Malawi?

How much money will you need for your trip to Malawi? You should plan to spend around MWK50,662 ($49) per day on your vacation in Malawi, which is the average daily price based on the expenses of other visitors. Past travelers have spent, on average, MWK14,416 ($14) on meals for one day and MWK17,488 ($17) on local transportation. Also, the average hotel price in Malawi for a couple is MWK39,430 ($38). So, a trip to Malawi for two people for one week costs on average MWK709,272 ($690). All of these average travel prices have been collected from other travelers to help you plan your own travel budget.

A vacation to Malawi for one week usually costs around MWK354,636 for one person. So, a trip to Malawi for two people costs around MWK709,272 for one week. A trip for two weeks for two people costs MWK1,418,544 in Malawi. If you're traveling as a family of three or four people, the price person often goes down because kid's tickets are cheaper and hotel rooms can be shared. If you travel slower over a longer period of time then your daily budget will also go down. Two people traveling together for one month in Malawi can often have a lower daily budget per person than one person traveling alone for one week.


How expensive is Malawi? How much money do I need for Malawi?

How much does a trip to Malawi cost? Is Malawi expensive? The average Malawi trip cost is broken down by category here. All of these Malawi prices are calculated from the budgets of real travelers.

Looking for a hotel in Malawi? Prices vary by location, date, season, and the level of luxury. See below for options.

How much does it cost to go to Malawi? Naturally, it depends on the dates. We recommend Kayak because they can find the best deals across all airlines.

The price of renting a car in Malawi will depends on dates, the type of car, the location, and your age. We recommend Kayak because they can find the best deals across all car rental companies.

Tips and Handouts Budget in Malawi

Malawi On a Budget 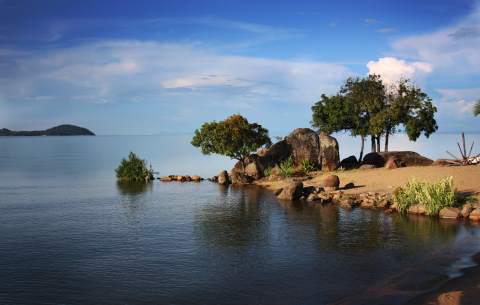 Lake Malawi
Malawi is a landlocked country of Southeastern Africa defined largely by its highland topography and vibrant culture. One of its top features is Lake Malawi, the largest lake in Africa, which runs along most of eastern border. The lake sits in the Great Rift Valley, which is also home to a diverse array of wildlife.

Malawi is divided into three regions: Northern Malawi, Central Malawi, and Southern Malawi. Northern Malawi is home to the city of Karonga which is close to Malawi Lake and the Misuku Hills, Mzuzu which is the northern region's largest town, and Nkhata Bay a rocky bay towards the north of the lake with lodges popular for vacationing. Central Malawi is home to the capital city of Lilongwe, as well as the historic slave shores of Nkhotakota which is now ethnically diverse and renowned amongst tourists for golden sandy beaches and resorts. Southern Malawi is home to the country's largest city and economic capital, Blantyre. This city thrives with visitors and locals alike with an interesting downtown, good nightlife and music, a range of places to stay from upscale to guest houses, and a vibrant street and market culture. Other cities in the south include Monkey Bay, Mangochi, and Zomba - known for its British colonial architecture, markets for fabric and handicrafts, and some of the best Indian food in Malawi.

The country of Malawi probably has the most diverse landscape in all of Africa. From peaks that reach 10,000 feet to the lowest point barely above sea level, the Malawi topography is a range of plateaus, highlands, forests, mountains, plains, cliffs, and steep river valleys. The Great Rift Valley is the dominant feature, filled in by Malawi Lake, surrounded by popular resorts, bays, beaches, and abundant wildlife. The Central African Plateau lies to the west of the lake while the southern part of Malawi is best known for its highlands, with fresh mountain air and lush, green forests.

Lake Malawi is a paradise for boating and water sports activities. Some of the best freshwater diving spots can also be found here, right in Nkhata Bay. Like in many countries of Africa, safaris are also common with visitors. National parks and wildlife reserves offer the best opportunities for such activities. As one can see, the list of things to do in Malawi can be quite comprehensive, as this dynamic country has everything from culture to wildlife.

Nyika National Park is Malawi's largest national park, Ntchisi Forest Reserve offers a stunning rainforest in an area untouched, Liwonde National Park is home to some of the best wildlife in the area. On any safari visitors are sure to come across striking landscape and animals like hippos, crocodiles, lions, elephants, and leopards, amongst others.

Mount Mulanje is the highest peak south of Kilimanjaro and a favorite among climbers. Many attempt to reach Sapitwa Peak, the tallest of Mulanje's peaks.

Cape Maclear is another of Malawi's top destinations - a nice haven of beaches and crystal waters for backpackers, boaters, and vacationers. It sits as a laid back fishing village on the tip of a peninsula jutting out into the southern portion of Lake Malawi

Traditional Malawian food, like Zambian, revolves around one staple grain called maize, which is served in one form called nshima. Nshima is a kind of thick porridge rolled into balls to be dipped in a variety of stews, commonly called relishes. The more specialty relishes include those of beef, chicken, or fish, while the more basic ones are made with beans, tiny dried fish (kapenta), peanuts, pumpkin leaves (chibwabwa), or other vegetables such as okra (ndelele), cabbage, and rape. Local restaurants generally serve nshima and relish for less than 5000K ($1). The nshima is more watered down into porridge for breakfast, usually with sugar. While this is a popular native dish, pretty much any kind of food, including Western cuisine, can be found in the city areas like Lilongwe and Blantyre. There are also many ethnic eateries in the city, and in most, pork products are not served to accommodate the Muslim population. Also be aware that tap water in Malawi is generally not drinkable unless boiled first. Bottled water is mostly available in the city areas, so be sure to stock up before a safari in the wilderness.

Visitors from most countries, including the United States, Canada, Australia, European Union countries, Japan, Singapore, and South American Countries now require a visa to enter Malawi. A single entry visa on arrival is good for 90 days and cost $75 USD. A 7-day Transit visa costs $50 USD. 29 countries need to acquire a visa in advance at a Malawi embassy.

There are no trains running in Malawi. It is possible to get in by car or bus.

Hitchhiking is a common practice in Malawi, though most people expect some form of payment, though it is usually cheaper than public transportation.