How much does it cost to travel to the Maldives?

How much money will you need for your trip to the Maldives? You should plan to spend around MVR3,698 ($241) per day on your vacation in the Maldives, which is the average daily price based on the expenses of other visitors. Past travelers have spent, on average, MVR964 ($63) on meals for one day and MVR1,712 ($111) on local transportation. Also, the average hotel price in the Maldives for a couple is MVR2,897 ($189). So, a trip to the Maldives for two people for one week costs on average MVR51,775 ($3,371). All of these average travel prices have been collected from other travelers to help you plan your own travel budget.

A vacation to the Maldives for one week usually costs around MVR25,888 for one person. So, a trip to the Maldives for two people costs around MVR51,775 for one week. A trip for two weeks for two people costs MVR103,551 in the Maldives. If you're traveling as a family of three or four people, the price person often goes down because kid's tickets are cheaper and hotel rooms can be shared. If you travel slower over a longer period of time then your daily budget will also go down. Two people traveling together for one month in the Maldives can often have a lower daily budget per person than one person traveling alone for one week.

How much does a trip to the Maldives cost? Is the Maldives expensive? The average Maldives trip cost is broken down by category here. All of these Maldives prices are calculated from the budgets of real travelers.

Accommodation Budget in the Maldives

Hotels in the Maldives

Looking for a hotel in the Maldives? Prices vary by location, date, season, and the level of luxury. See below for options.

Transportation Budget in the Maldives

Intercity Transportation Budget in the Maldives


Flights to the Maldives

How much does it cost to go to the Maldives? Naturally, it depends on the dates. We recommend Kayak because they can find the best deals across all airlines.

Rental Cars in the Maldives

The price of renting a car in the Maldives will depends on dates, the type of car, the location, and your age. We recommend Kayak because they can find the best deals across all car rental companies.


Food Budget in the Maldives

Entertainment Budget in the Maldives

Alcohol Budget in the Maldives

Water Budget in the Maldives

The Maldives On a Budget 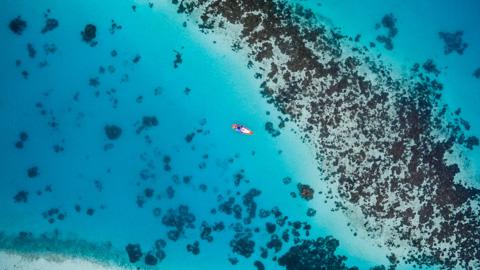 The Maldives
The Maldives is a tropical nation located in the Indian Ocean, consisting of ring-like coral islands or atolls. It is a popular destination for honeymooners, as well as for visitors interested in scuba diving or snorkeling explorations along the unique reef ecosystem.

The Maldives consist of 20 administrative atoll groups, only ten of which are open to tourism. The naming of these groups are complex as they have traditional names as well as code names that are easier to remember and used most often by tourists. The 10 that are open to tourism include Lhaviyani (Faadhihpolhu), Raa (Maalhosmadulu Uthuruburi), Baa (Maalhosmadulu Dhekunuburi), Kaafu (North and South Male Atoll), Alifu (Ari), Vaavu (Felidhu), Meemu (Mulak), Faafu (Nilandhe Atholhu Uthuruburi), Dhaalu (Nilandhe Atholhu Dhekunuburi), and Seenu (Addu). The code names, most used by the general public, are listed in bold. Of these ten, Kaafu is the most popular and most developed with tourism. It is home to the capital (Male), the airport island (Hulhule), and most Maldivian resorts. The second most popular group of atolls is Alifu, located just to the west of Kaafu. Here there are many additional resorts that can be reached by seaplane in 20-30 minutes, or speed boats, which take several hours. Seenu is the southernmost atoll group, which is home to Gan International Airport, and has a series of four islands connected by a causeway. The second largest city in the Maldives is also located here. The remaining atoll groups, which are not open to tourists, consist of Gaafu Alifu, Gaafu Dhaalu, Gnaviyani, Haa Alifu, Haa Dhaalu, Laamu, Nyavinani, Seenu, Shaviyani, and Thaa.

Many people flock to the Maldives to enjoy the serenity of their own personal water bungalow at one of the main resort destinations.

The next most popular activities are scuba diving and snorkeling. Since the islands are actually coral reefs, located far away from any mainland, the water is crystal clear and the underwater wildlife is abundant. Prices for diving excursions vary from resort to resort, but generally can range between $50-$100 USD, depending on whether or not you have your own gear, boat usage, guides, etc. Another option is to stay on a Liveaboard dive boat in the Maldives for several days. This way you can have all of your meals and sleep on the boat. Then, you just spend the entire time scuba diving whereever the boat takes you. For more information, check out this guide to the best liveaboards in the Maldives.

Surfing is another popular activity during a visit to the Maldives. The best period for surfing here is between March and October, with the biggest waves occurring in June, July, and August. The unique setting of the Maldives' turquoise waters has become a draw for surfers, divers, snorkelers, swimmers, sunbathers, and honeymooners alike.

While Kaafu and Alifu are the most popular atolls for tourists seeking out a tranquil bungalow escape, there are several other locations throughout the tropical nation that are frequented for different reasons. Hanifaru Bay, for example, in the Baa atoll is one of the Maldives' most famous marine sites. Especially notable is one of the largest seasonal gatherings of manta rays in the world. Whale sharks are also seen seasonally, especially during monsoon when many species gather to feed on plankton that have washed into the lagoon. Another noteworthy site within Baa is the Blue Hole, which is very popular with snorkelers and scuba divers, who have the opportunity to experience a coral-lined underwater chimney that gradually narrows from 22 meters to seven meters. As a whole, the Baa atoll is an UNESCO Biosphere Reserve, meaning its waters are protected, which has allowed for an abundance of more than 200 species of coral and over 1,000 species of reef fish.

As far as the resorts go, breakfast is almost always included and visitors can opt to purchase package deals that can include lunch and/or dinner buffet. (Check out Dhigurah Island Beach and Diving Resort if you're looking for one of the nicer places to stay.) Typically the food here is European or Asian to meet the expectations of guests, but there are options outside of the resorts that will have a wider range of local offerings. Being an island nation, the Maldives mainly serves up cuisine that revolves around fish (mas), drawing heavily from Sri Lankan and south Indian traditions. Tuna (kandu mas), in particular, is widely used, and dishes are often hot and spicy, served with rice, and flavored with coconut. Curries (riha) are also popular and usually served with roshi (unleavened bread) and other local flatbreads. A few additional Maldivian specialties include:

hedhikaa: snacks that are usually fish-based and deep-fried

bajiya: a pastry stuffed with fish, coconut, and onions