How much does it cost to travel to Namibia?

How much money will you need for your trip to Namibia? You should plan to spend around N$1,114 ($73) per day on your vacation in Namibia, which is the average daily price based on the expenses of other visitors. Past travelers have spent, on average, N$97 ($6.30) on meals for one day and N$200 ($13) on local transportation. Also, the average hotel price in Namibia for a couple is N$641 ($42). So, a trip to Namibia for two people for one week costs on average N$15,602 ($1,018). All of these average travel prices have been collected from other travelers to help you plan your own travel budget.

A vacation to Namibia for one week usually costs around N$7,801 for one person. So, a trip to Namibia for two people costs around N$15,602 for one week. A trip for two weeks for two people costs N$31,204 in Namibia. If you're traveling as a family of three or four people, the price person often goes down because kid's tickets are cheaper and hotel rooms can be shared. If you travel slower over a longer period of time then your daily budget will also go down. Two people traveling together for one month in Namibia can often have a lower daily budget per person than one person traveling alone for one week.


How expensive is Namibia? How much money do I need for Namibia?

How much does a trip to Namibia cost? Is Namibia expensive? The average Namibia trip cost is broken down by category here. All of these Namibia prices are calculated from the budgets of real travelers.

Find a hostel, guesthouse, or B&B in Namibia

Tips and Handouts Budget in Namibia

Namibia On a Budget

Dead tree in Dead Vlei, Sossusvlei, Namib Desert, Namibia
Namibia is a country in southwest Africa that is well known for its rust-colored Namib Desert and its location along the Atlantic coast. The country is home to a diverse array of wildlife, while the capital city of Windhoek has many historic buildings built during the German colonial era. Namibia finally gained its independence in 1990, and has since grown in tourism - especially for those seeking the country's unique landscape and wildlife.

Windhoek is Namibia's capital and largest city. Located at the very center of the country, the place was formerly a colony of Germany, and its influence shows in the architecture. Windhoek's Christuskirche (Christus Church) especially shows the colonial leanings and remains a landmark of the city. This is the point of entry for people arriving by plane, and is also the starting point from which most safaris embark. Keetmanshoop is a small town further south and jumping off point for treks in the Fish River Canyon Park, Luderitz is a colonial-era German coastal town, Outjo in the north serves as a gateway to Etosha National Park, Swakopmund is a coastal town popular with Namibians on holiday, and Tsumkwe is a desert town in the northeast surrounded by San (Bushman) villages.

Namibia is largely a land of natural beauty. One of its most dominant features runs along the Atlantic coastline for about 1000km in a sea of rust-colored sand - the Namib Desert from which the country takes its name. It is one of the oldest deserts in the world with towering dunes that catch the light and shadows of the changing sun throughout the day. Sossusvlei is the most accessible part in the southern part of the desert, a clay pan with impressive dunes and wildlife. The Fish River Canyon, located a bit further south near the border, is the largest canyon in Africa and the second most visited destination in Namibia.

Back in the northern part of the country, Skeleton Coast National Park, though mostly inaccessible, is known for its barren flatland of sand and stone, frequent fog, and a number of shipwrecks along the coast. Etosha National Park, on the other hand, is one full of life. It is the top destination in Namibia to see African wildlife in their natural environments. The park surrounds the Etosha salt pan, which attracts animals, particularly in the drier winter months because it is a source of water in a place mostly dry. Waterberg Plateau Park, the parks of the Caprivi, and the remote Kaokoland are also hotspots for viewing wildlife.

As Namibia is very much known for its natural features, outdoor activities like trekking and safaris dominate as the most popular things to do. The Fish River Canyon Trail, for example, is one of the most popular hikes in Southern Africa. It is a very tough and long trail, but there is some beautiful scenery as well as opportunities for swimming. There are also opportunities for hiking in the Namib desert, as well as in the handful of other national parks in the country.

As mentioned before, the top destination for safaris is the Etosha National Park. There are several safari companies operating from Windhoek and Swakopmund which offer tours of varying length in Etosha. The companies are also allowed to enter the western part of the park which is closed to private visitors, offering likely opportunities to see rhinos, lions, zebra, giraffes, gemsbok, springbok, wildebeest, elephants, and jackals.

Namibian cuisine of today has been influenced by a mix of two cultures - that of the indigenous people and that of the settler community of German colonials. On the indigenous side of things, cuisine consisted of a range of fruits, nuts, bulbs, leaves and other products gathered from wild plants and by the hunting of wild game. Cattle was eventually domesticated which allowed for the use of dairy and wider availability of meat. In regards to settler cookery, typical German dishes like Wiener schnitzel became very popular and remain so today, as well as the brewing of German lager beers like the local Hansa and Windhoek. Outdoor cooking is also part of the Namibian way of life. The traditional Braaivleis (meat barbeque) is a tasty meal, as is potjiekos, a spicy stew of meat, chicken and fish cooked in a cast iron, three-legged pot over an open fire.

By car, there are nine commonly used border posts with the neighboring countries of Angola, Botswana, South Africa, and Zambia.

By bus, the most convenient international bus service into Namibia runs from Cape Town and Victoria Falls. There is also service from Johannesburg. See Intercape Mainliner website for schedules and fares.

Be sure to research visas in advance. Tourists can generally enter Namibia for up to 90 days. 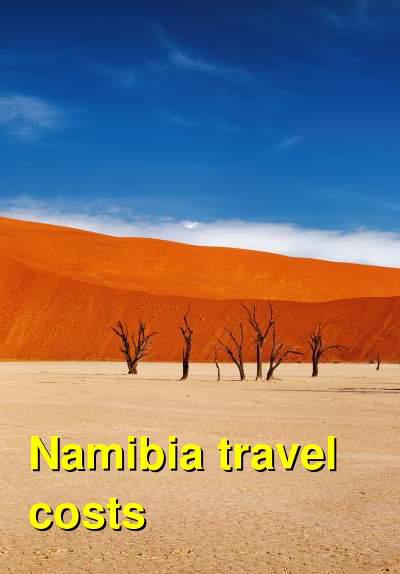