How much does it cost to travel to Paraguay?

How much money will you need for your trip to Paraguay? You should plan to spend around Gs448,341 ($61) per day on your vacation in Paraguay, which is the average daily price based on the expenses of other visitors. Past travelers have spent, on average, Gs101,324 ($14) on meals for one day and Gs51,861 ($7.05) on local transportation. Also, the average hotel price in Paraguay for a couple is Gs263,295 ($36). So, a trip to Paraguay for two people for one week costs on average Gs6,276,776 ($854). All of these average travel prices have been collected from other travelers to help you plan your own travel budget.

A vacation to Paraguay for one week usually costs around Gs3,138,388 for one person. So, a trip to Paraguay for two people costs around Gs6,276,776 for one week. A trip for two weeks for two people costs Gs12,553,553 in Paraguay. If you're traveling as a family of three or four people, the price person often goes down because kid's tickets are cheaper and hotel rooms can be shared. If you travel slower over a longer period of time then your daily budget will also go down. Two people traveling together for one month in Paraguay can often have a lower daily budget per person than one person traveling alone for one week.


How expensive is Paraguay? How much money do I need for Paraguay?

How much does a trip to Paraguay cost? Is Paraguay expensive? The average Paraguay trip cost is broken down by category here. All of these Paraguay prices are calculated from the budgets of real travelers.

Looking for a hotel in Paraguay? Prices vary by location, date, season, and the level of luxury. See below for options.

How much does it cost to go to Paraguay? Naturally, it depends on the dates. We recommend Kayak because they can find the best deals across all airlines.

The price of renting a car in Paraguay will depends on dates, the type of car, the location, and your age. We recommend Kayak because they can find the best deals across all car rental companies.

Typical prices for Alcohol in Paraguay are listed below. These actual costs are from real travelers and can give you an idea of the Alcohol prices in Paraguay, but your costs will vary based on your travel style.

Paraguay On a Budget 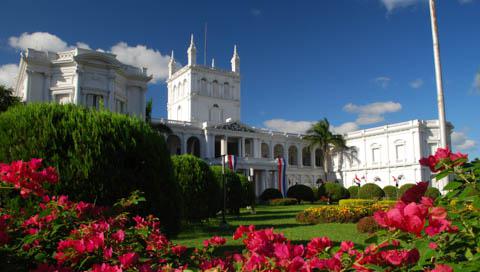 Asuncion, Paraguay
In the heart of the small, landlocked country of Paraguay is a relatively untouched culture. The Spanish and Amerindian mix known as "mestizo" still makes up more than 80% of Paraguay's population. This remote region of South America has seen its share of ups and downs throughout its long history. Wars, splits and immigration surges have formed a country with a distinct identity offering an authentic South American experience.

Paraguay is divided into several regions. The Gran Chaco consists of most of the northwester area od the country. It's full of large, wild plains. The Parana Plateau is on the opposite end of Paraguay - covering the southeast area. Covered in forested highlands, this region runs along the Parana River, and is home to the second largest city, Ciudad del Este. Northern Paranena is located between these two regions, with Southern Paranena just beneath it. Southern Paranena is where you'll find the bulk of the country's population.

When it comes to traveling throughout the country, taxis are your most efficient and reliable option. Outside of Asuncion there are no meters so be sure to negotiate the price before your trip begins. As you communicate with locals, you'll find that Spanish is widely spoken and very few people will know English. Outside of the larger cities, you'll mostly hear the indigenous language of Guarani. Often locals will mix the two to form a language known as Jopara.

At the heart of Paraguay is the simple and classic Asuncion. The original architecture mixed with modern shops and restaurants provide a nice introduction to the country as a whole. While they claim to be home to 2.5 million people, you'll swear it's more. Locals flock to this city, and after a few days there, you'll begin to wonder if you shouldn't stick around, too.

The most beautiful city you'll visit in Paraguay is Encarnacion, also known as "the Capital de Carnaval." This is the place to see and be seen during the summer. It's amazing riverside promenade will provide the perfect backdrop for every evening stroll.

Just 28 kilometers northeast of Encarnacion, is the hilltop region of Trinidad. This is Paraguay's best-reserved Jesuit settlement. Have a guide show you around during the day, and then spend the evening watching the spectacular light show projecting the history of the site onto the walls of the ancient settlement. If you're up for a challenge, try to get to the San Cosme y Damian - the spot where the settlement kept its astronomical observatory.

If you're more interested in spotting wildlife, head to the Gran Chaco. This massive land region is split into the flooded palm savannas of Humid Chcao and the forests of Dry Chaco. Here you can keep your eyes out for birds of prey and flocks of waterbirds. No need to strain, these are easily seen along every roadside. Even though this region makes up 60% of the entire country, less than 3% of the country's population lives here. It was once a refuge for hunter-gatherers, but today most of the settlements you'll find belong to the Mennonite communities.

One of the more fascinating man-made attractions in Paraguay is the Itaipu Dam. The second largest dam in the world, the Itaipu Dam generates nearly 80% of all of Paraguay's electricity. Free tours leave from the visitor's center near the town of Hernandarias - just north of Ciudad del Este.

If you're more interested in the ornate than the practical, take a trip to the 19th century Franciscan church at Yaguaron. This architectural landmark is a shining example of Paraguayan colonial architecture. With its wooden bell tower and carved interiors, it is easily one of most breathtaking churches in all of South America.

The food in Paraguay is a large amount of dishes collected from standard South American culture with a bit of Brazilian influence. You'll want to seek out the stuffed empanadas and milanesa. These are considered fast food, but well worth a taste when you're trying to catch the bus to Asuncion.

If you're dying for some real, traditional Paraguayan food, the chip-a-bread is made of mandioca flour, and baked in an outdoor oven or "tatcua." This flour is a substitute for potatoes. Tortillas are also different on Paraguay. Here they are more like fried dough made with Paraguayan cheese.