How much does it cost to travel to Doha?

How much money will you need for your trip to Doha? You should plan to spend around QAR582 ($160) per day on your vacation in Doha, which is the average daily price based on the expenses of other visitors. Past travelers have spent, on average, QAR179 ($49) on meals for one day and QAR67 ($19) on local transportation. Also, the average hotel price in Doha for a couple is QAR695 ($191). So, a trip to Doha for two people for one week costs on average QAR8,144 ($2,237). All of these average travel prices have been collected from other travelers to help you plan your own travel budget.

A vacation to Doha for one week usually costs around QAR4,072 for one person. So, a trip to Doha for two people costs around QAR8,144 for one week. A trip for two weeks for two people costs QAR16,289 in Doha. If you're traveling as a family of three or four people, the price person often goes down because kid's tickets are cheaper and hotel rooms can be shared. If you travel slower over a longer period of time then your daily budget will also go down. Two people traveling together for one month in Doha can often have a lower daily budget per person than one person traveling alone for one week.


How expensive is Doha? How much money do I need for Doha?

How much does a trip to Doha cost? Is Doha expensive? The average Doha trip cost is broken down by category here. All of these Doha prices are calculated from the budgets of real travelers.

How much do vacation rentals cost in Doha? Prices vary by location, date, size of the place, and the level of luxury. See below for options.

How much does it cost to go to Doha? Naturally, it depends on the dates. We recommend SkyScanner because they can find the best deals across all airlines.

The price of renting a car in Doha will depends on dates, the type of car, the location, and your age. We recommend SkyScanner because they can find the best deals across all car rental companies.

Doha On a Budget

Doha, Qatar
Doha is the capital city of Qatar, modern and rapidly developing with much construction underway. It is home to Doha International Airport, the main point of entry for Qatar, as well as many of the country's best museums and examples of cultural heritage.

The attractions of the city represent a full range of architecture, museums, markets, history, and culture. The Museum of Islamic Art museum is one such sight, featuring the full scope of Islamic art from three continents over 1,400 years. With architecture inspired by classic Islamic elements, the museum has become an iconic feature of the Doha skyline. It is host to regular special exhibitions, events, lectures, and activities. Then there is Souq Waqif, a traditional old marketplace of Qatar, selling unique goods like spices, textiles, and even live falcons. It is a great place to pick up souvenirs, and bargaining is highly recommended.

Another unique feature of the city is The Pearl Qatar, a manmade island connected to the city of Doha by a bridge. This is where most of the upscale resorts are located with a harbor full of cruise boats and a luxury neighborhood of fine dining and designer stores. And finally there is Villaggio Mall, one of Qatar's newest malls designed to look like Venice in its architecture and canal-ways. It is home to a variety of storescasual, western, and luxuryplus a food court, restaurants, gondola rides, and an ice skating rink.

As far as neighborhoods go, Doha is home to a mix of atmospheres from traditional Arab sectors, to bustling markets, and upscale waterside resorts. Doha Heritage Village, for example, is based on a traditional Qatari village with opportunities to see weaving, pearl trading, and a traditional boat (dhow), plus the occasional festival and other activities. The city is also home to Souq Waqif, a renovated Arabic market quarter with a maze of corridors to explore. Its shops are divided into sections with shop categories for things like spices, textiles, souvenirs, and even live falcons. And then on the higher end of things, the Pearl-Qatar neighborhood of Doha is the country's manmade island, full of luxury resorts, homes, cruise boats, and designer shopping.

Most of Doha's activities consist of shopping and exploring markets and malls, dining, sight-seeing, museum-going, and enjoying Qatar's nightlife. And being a city by the sea, it has also become a popular destination for watersports and beach-going. Kite-surfing is increasingly popular for western visitors, while locals can often be seen driving jet-skis from beach to beach. Sailing, cruising, diving, scuba, and beach sports like volleyball and cricket are also very common.

The cuisine to be found in Doha is surprisingly diverse. Qatari fare is made up of traditional Arab and Levantine cooking, and is also largely influenced by Iranian and Indian food. While Middle Eastern fare is also common, other options available include Indian, Thai, Chinese, Italian, and Korean. Western fare is another option with American chains like McDonald's, KFC, Hardee's, Arby's, Burger King, Dairy Queen, Pizza Hut, TGI Friday's Applebee's, Chili's, Fuddruckers, Bennigan's, Ponderosa Steakhouse, Red Lobster, and Starbucks.

There are some good dining options just outside Souq Waqif and inside Villaggio Mall, and if you want to try authentic Middle Eastern fare, there are some good cheap options in Turkey Central on Al-Mirghab Street. Traditional dishes include things like:

Machbus: the national dish of Qatar, it is a meal consisting of rice, meat, and vegetables (onions and tomatoes).

Kabsa: similar to Machbus, the dish consists of rice, meat, and vegetables mixed with spices. It is also similar to biryani or pilaf.

Balaleet: Noodles cooked with sugar, cinnamon, saffron, and cardamom, often with an omelet on top.

Doha International Airport is the main point of entry for Qatar, and is becoming a very important waypoint in the Persian Gulf Region. Qatar Airways connects the city with destinations in Africa, Asia, Australia, Europe, Indian Sub-continent, North America, and South America. Several car rental agencies are available at the airport, though it is recommended to have a vehicle reserved before landing.

If you are traveling by car, Saudi Arabia is the only country that borders the country.

Once in Doha, most people navigate by landmarks as most businesses don't use street numbers or street names in their addresses. Public buses are available throughout the city, as are taxis though their demand often makes it difficult to catch one. 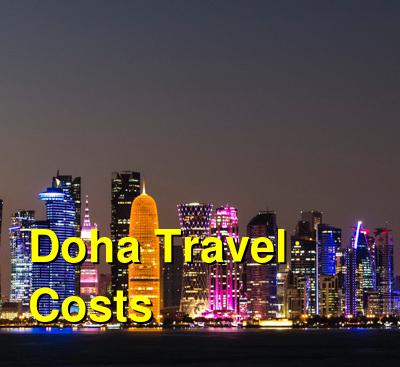