How much does it cost to travel to Tainan City?

How much money will you need for your trip to Tainan City? You should plan to spend around NT$2,856 ($97) per day on your vacation in Tainan City, which is the average daily price based on the expenses of other visitors. Past travelers have spent, on average, NT$1,011 ($34) on meals for one day and NT$480 ($16) on local transportation. Also, the average hotel price in Tainan City for a couple is NT$3,073 ($104). So, a trip to Tainan City for two people for one week costs on average NT$39,982 ($1,358). All of these average travel prices have been collected from other travelers to help you plan your own travel budget.

A vacation to Tainan City for one week usually costs around NT$19,991 for one person. So, a trip to Tainan City for two people costs around NT$39,982 for one week. A trip for two weeks for two people costs NT$79,963 in Tainan City. If you're traveling as a family of three or four people, the price person often goes down because kid's tickets are cheaper and hotel rooms can be shared. If you travel slower over a longer period of time then your daily budget will also go down. Two people traveling together for one month in Tainan City can often have a lower daily budget per person than one person traveling alone for one week.

How much does a trip to Tainan City cost? Is Tainan City expensive? The average Tainan City trip cost is broken down by category here. All of these Tainan City prices are calculated from the budgets of real travelers.

How much do vacation rentals cost in Tainan City? Prices vary by location, date, size of the place, and the level of luxury. See below for options.

How much does it cost to go to Tainan City? Naturally, it depends on the dates. We recommend Kayak because they can find the best deals across all airlines.

The price of renting a car in Tainan City will depends on dates, the type of car, the location, and your age. We recommend Kayak because they can find the best deals across all car rental companies.

Tainan City On a Budget 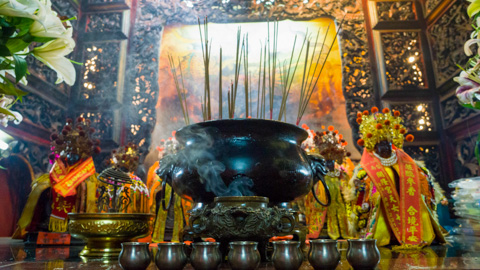 Tainan City
The oldest city in Taiwan, Tainan was once the nation's capital during imperial times and is today famous for its temples and historic buildings which speak to this distant past. Additionally Tainan has become known for its lively night markets and fantastic snack foods available from a large concentrate of street vendors located throughout the city.

For historical landmarks which resonate with the city's ancient and colonial past, Anping is the key district of interest. It is home to structures like the Eternal Golden Castle, a 19th century coastal fortress featuring a saltwater moat and earthen mound, as well as some replica canons. The ruins of the Anping Fort from the early 17th century mark the site of the Dutch Fort Zeelandia where European seafarers came to Asia to trade and develop colonial outposts. Another attraction of the district includes an old abandoned warehouse, known as the Anping Tree House due to the roots and branches of banyan trees which have enveloped the old structure. The town itself is reminiscent of a long history with winding alleys and traditional architecture at every bend.

TOGO Rural Village Art Museum is another unique attraction of the city. The museum transcends the traditional formats of artwork and museum, and instead regards houses, farms, products, and farmers as the exhibitions, canvas, crafts, and artists. It is a kind of art experience that emphasizes the local culture. Other popular attractions include the Chihkan Towers, National Museum of Taiwanese Literature located in a restored colonial-era Japanese building, the Confucius Temple surrounded by a small park, Luermen Matsu Temple, and Guanziling-one of Taiwan's best-known hot springs.

One of the most popular destinations in the Tainan area is the Anping District-the historical heart of the city. It is home to the Anping Old Fort and Anping Tree House as well as a number of restaurants and food stalls. Tainan is also the city where the Dutch colonialist East India Company located its Taiwan base, and built Fort Zeelandia (at today's Anping) and Fort Provincia (at today's Chickan Tower) to secure the entrance to the harbor. The forts are still located there today, though the land around them has changed since then.

Downtown Tainan centers on Beimen Road, which is lined with plenty of opportunities for shopping and dining as well as the main train station and all intercity bus terminals. There are also plenty of night markets located throughout the city featuring stalls selling clothing, shoes, jewelry, toys, food, drink, and more-some even have live entertainment. The Garden Night Market is the biggest and most popular with plenty of food stalls and game booths, usually open Thursdays, Saturdays, and Sundays (though it can get very crowded).

Best known for its temples, historic landmarks, and street food, a fulfilling visit to Tainan will include a sampling of it all. Spend some time exploring the attractions mentioned above, especially the historic district of Anping which offers a unique glimpse into Tainan's past. To experience hub of culture in Tainan today, visit any of the city's night markets, which occur in varying sizes all around the city. Get lost shopping for local goods and sampling Taiwanese flavors from the mass of street vendors who populate these markets. If the crowds of the city get to be too much, visitors can also escape to the trees, flowers, and peaceful pond of Tainan Park tucked into the central park of the city. There are also a number of mangrove reserves just outside of Tainan which can be toured.

As far as cuisine goes, Tainan is sometimes called the City of Snacks due to the abundance of street food and vendors dominating the local markets. Guohua Street, between Minshen Road and Minzu Road, is one of these places lined with stalls and small restaurants of all varieties. Another popular food hub is the bustling night market at the corner of Hai-an and He-wei Roads. Some Tainan specialties include things like coffin toast (fried bread stuffed with varying ingredients, including chicken, beans, seafood, vegetables, and milk-based sauces), oyster omelet, oysters and thin noodles, rice cakes, dan zai noodles (with ingredients like shrimp, coriander, and garlic), fried eel, and shrimp rolls (or zhou-shi). Pearl milk tea (also known as boba or bubble tea) is a popular beverage in Tainan and can be made to order in a number of varieties.

The nearest major airport is Kaohsiung International Airport, which is about 45 minutes to one hour from Tainan depending on mode of transportation. Train, bus, taxi, or rental cars are all available from Kaohsiung to Tainan.

Tainan also has good intercity bus connections with other cities in Taiwan. Trains are available as well-both high speed (HSR) and slow (TRA).