The Best Places to Enjoy the Water in Chicago

Sitting right on the banks of Lake Michigan, Chicago has a number of beaches, waterfront parks, and water views that are perfect for anyone who enjoys the lake. Below are just some of the best places to visit if you want to enjoy Chicago's waterfront setting. 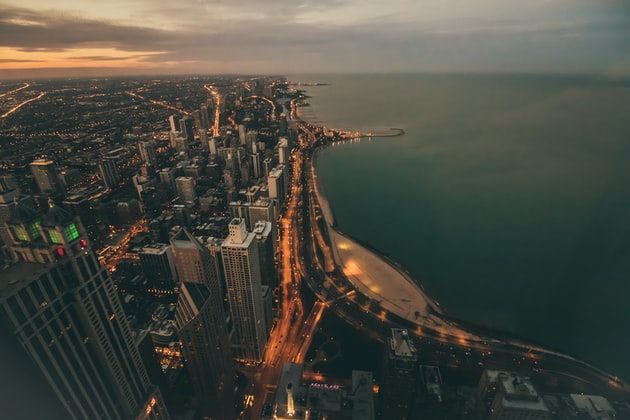 Oak Street Beach is popular for volleyball, sunbathing, and relaxing. You can rent a chair with an umbrella or bring your own. There's also a cafe that often has a DJ and a lively atmosphere. This is a popular beach, so you should expect a crowd.
Gold Coast, Chicago, Illinois, 60611
Website

Located in Chicago's Chinatown, this park has a pagoda-style pavilion, bamboo gardens, and a playground. The waterfront park spans 17 acres and there are places nearby where you can rent kayaks. The Field House is a recreational area in the park that has a pool with slides and a fitness center. From here you can enjoy great views of the Chicago skyline. Throughout the year there are a number of events held here including Shakespeare in the Park. Runners and walkers will appreciate the trails through the park as well.
300 West 19th Street, Chinatown, Chicago, Illinois, 60616
Website
Interested in more travel advice for Chicago? Check out The Best Parks in Chicago and The Best Places To People Watch In Chicago.

Streeterville is a popular neighborhood for tourists in Chicago. It's where you'll find the historic Navy Pier, the Museum of Contemporary area, and the Chicago Children's Museum. This family-friendly area sits on the edge of Lake Michigan and offers all kinds of activities for people of all ages. They often show outdoor movies and Navy Pier is filled with amusement rides including the 200 foot Centennial Wheel. There are also a number of boat cruises that leave from the area. Restaurants of all types are nearby, many with kid-friendly menus.
Chicago, IL

Rainbow Beach is a nice beach near some of the city's oldest community gardens. Because the beach is surrounded by a natural area, it's a beautiful spot with birds, butterflies and dragonflies.
2873 E. 75th Street, South Shore, Chicago, IL, 60649
Website

North Avenue Beach is a popular summer destination when it fills with locals playing volleyball and families playing in the sand. Swimming is popular when the water gets warm and there is plenty of water sports equipment available for rent including kayaks, stand-up paddleboards, and jet skis. Bands frequently play at the beach house and there's also ice cream and margaritas available.
1601 N. Jean-Baptiste Pointe DuSable Lake Shore Drive, Lincoln Park, Chicago, IL, 60611
Website

This is a favorite beach in Chicago. It's a popular place to rent kayaks, stand-up paddleboards, and jet skis. It's also a hangout for surfers, kite surfers, bird watchers, and people fishing. There is the Dock Bar and Grill where you can grab a bite or a drink. Dogs are welcome in the northern parts of the beach which are wide and sandy.
4400 N. Lake Shore Dr., Uptown, Chicago, IL, 60613
Website
Planning a trip to Chicago? You might also be interested in Chicago's Best Neighborhoods for Architecture Lovers and Neighborhoods in Chicago.

These beaches stretch out for eight blocks, making them the longest stretch of beach in Chicago. Located near Loyola University in the East Rogers Park neighborhood, this area has a playground and areas that are perfect for strollers. There are also a number of sports fields nearby including baseball fields, basketball courts, and a kayak launching spot.
1222 W Touhy Ave, East Rogers Park, Chicago, IL, 60626

Bordering the shore of Lake Michigan to the east, Lakeview is a relaxed neighborhood with a laidback vibe. The area combines East Lakeview, Central Lakeview, Boystown, and Wrigleyville and it offers a number of entertainment options, shopping districts, as well as bars and restaurants that are popular with locals and tourists alike. There are live music venues, theaters, and dance clubs. There are also outdoor activities like the Lakefront Trail, picnic areas, a golf course, and summer street festivals. Boystown is also notable as the first gay neighborhood in the United States to gain official recognition by a city government. You can visit during June to celebrate the annual Pride Parade.
Chicago, IL

Kathy Osterman Beach is a lively beach with tons of activities, from volleyball to fishing. There are frequent summertime events and a shallow area that's great for swimming. This is also recognized as the city's unofficial LGBTQ+ beach destination.
5800 North Jean-Baptiste Pointe DuSable Lake Shore Drive, Edgewater, Chicago, IL, 60640
Website

This is a 600 acre park that sits on the edge of Lake Michigan on the South Side of Chicago. It has a variety of facilities including basketball, tennis courts, and playgrounds. The Osaka Garden is also on the grounds, which is a Japanese style garden that's on an island in the park's east lagoon. There are also several beaches and a running track that visitors can take advantage of.
6401 S Stony Island Ave, South Shore, Chicago, IL, 60637
Website
Interested in more travel advice for Chicago? Check out The Best Beaches Near Chicago and The Best Summer Activities in Chicago.

Dating back to the mid 1800s, this park was at one time considered to be one of the greatest public parks in the country. Today it has rose gardens, tennis courts, an inland beach, and bike paths.
Humboldt Park, Chicago, IL

Foster Beach is a family-friendly beach in the Edgewater neighborhood of Chicago. It's a quieter beach than some of the more popular options, but it's perfect for people with kids or dogs who want to enjoy a picnic, barbecue, or simply hang out by the water. While it's generally a quieter beach, it does get quite busy during the Chicago Full Moon Jam, when fire dancers, musicians, and drummers all come out to perform and celebrate.
5200 N. Lake Shore Dr., Edgewater, Chicago, IL, 60611
Website

Burnham Park follows the banks of Lake Michigan for six miles from 14th Street to 56th Street. It spans 600 acres and includes the Burnham Harbor, Soldier Field, and McCormick Place. The Lakefront Trail passes through the park as well. Skateboarders will appreciate Burnham Skate Park, but there are also tennis courts, a fishing pier, and several beaches. For kids, there is a playground.
South Loop, Chicago, IL

Belmont Harbor Beach is a popular spot for running, walking, or biking. It's near Chicago's Yacht Club and, with a great fenced in area near the water, this is a popular spot for dog owners. When the weathers nice, head here for a day of relaxing, exercising, of simply enjoying the great outdoors with your dog companion.
Belmont & Lake Shore Drive, Lincoln Park, Chicago, IL, 60614
Website

This family-friendly beach is close to the Museum of Science and Industry. It has a low key vibe and is rarely crowded, making it a good option for kids. Surfers also frequent this beach. Restrooms and a snack bar are available.
5700 South Lake Shore Drive, Jackson Park, Chicago, IL, 60611
Website

Prices for activities, things to do, and tours range from $25 to $109. The average cost for a tour or tickets is $49. A few of the best options are below.