The Best Beaches Near San Francisco

Built on a peninsula, San Francisco is surrounded by water. It touches the bay on one side and the Pacific Ocean on the other. With so much of life in the city geared towards the water, there are bound to be great beaches. From small and quiet, to larger and more popular, these are some of the best beaches in San Francisco. 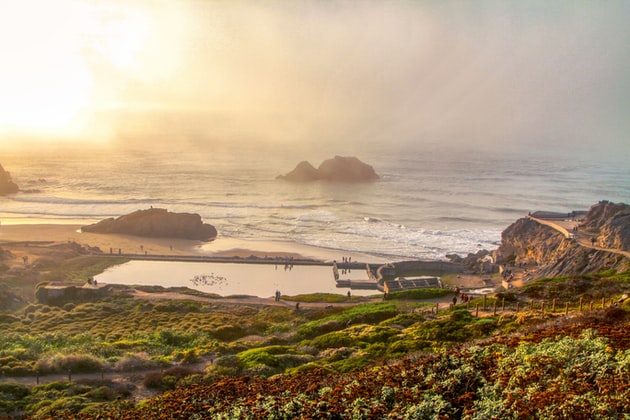 Lands End is a park that's located in the Golden Gate National Recreation Area. It runs along the beautiful rocky shoreline and offers stunning views out over the water. It's located between the Sutro District and Lincoln Park and has a number of hiking trails that follow the coast. You'll also find a few small beaches such as Mile Rock Beach and Sea Rocks Beach. Also inside the park is the Legion of Honor art gallery, Holocaust Memorial, a golf course, the USS San Francisco WW2 Memorial, the Sutro Baths, and more. It's a nice place to explore, or find a space to yourself and enjoy reading or simply relaxing.
Seacliff, SF, California, 94121-1545
Planning a trip to San Francisco? You might also be interested in The Best Art Museums in San Francisco and The Best Children's Museums in San Francisco.

This state park is located in the city of Alameda by the San Francisco Bay.
Gold Coast, Alameda, California, 94501

Tennessee Beach is in Marin County and is just under a 2 mile hike from the closest parking lot. During low tide you can see parts of the ship that it was named for.
San Francisco, California

Rodeo Beach is part of the Golden Gate National Recreation Area. It's located in Marin County and has a notable spit that is about 50 meters wide. There is pebbly sand and cliffs by the beach.
San Francisco, California, 94965

Located in Tilden Regional Park, Lake Anza is a swimming reservoir where visitors can enjoy a refreshing dip between the months of May and September. The park is found in the Berkeley Hills above Berkeley.
San Francisco, California, 94708
Website

Located in the northwestern part of San Francisco, Baker Beach is a public beach that is about half a mile long. The northern part of the beach is a nude beach.
Seacliff, SF, California, 94121
San Francisco has plenty more to offer, so see also our other articles: Things to Do In San Francisco on a Rainy Day and Budget Friendly Neighborhoods in San Francisco.

Ocean Beach is located on the West Coast of San Francisco by the Pacific Ocean. It is bordered by the Golden Gate Park, the Richmond District, and the Sunset District.
1506 Great Highway, Sunset District, SF, California, 94122
Website

On the north side of the Golden Gate Bridge, in the Marin Headlands area, this small southern-facing beach has fantastic views looking out towards the bridge and the city, as well as the ocean. You'll have to walk about a mile and climb some steps to get down here, but when you do, you'll be alone for the most part.
San Francisco, California