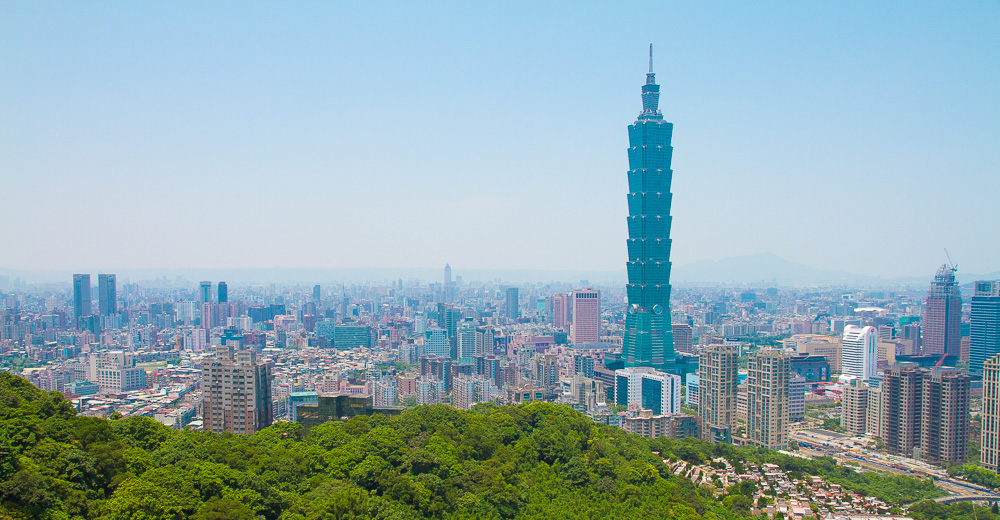 Taiwan is a small island country that packs in a mind-boggling range of cultural, culinary, and scenic attractions. There are so many awesome Taiwan attractions that you might not even know where to start when planning your trip.

We’re here to help, with this list of awesome things to do in Taiwan, with a mix of the most famous places and ideas for escaping the crowds.

1. Nibble your way through one of Taipei’s Night Markets

Eating is a national pastime in Taiwan, and Taipei’s famed night markets are the quintessential place to do it. Nowhere else will you find such a high concentration of cheap and delicious street food.

For a grand, 360-degree Taipei city view, head to the observation deck on the 89th floor of Taipei 101, once the world’s tallest building. The bamboo-shaped skyscraper still holds the title for world’s tallest “green” building.

You can spot other iconic Taipei landmarks below, such as the Miramar Ferris wheel and Sun Yat-Sen Memorial Hall. Don’t forget to check out the 730-ton ball suspended in the middle, which stops the building from falling over during earthquakes! Alternatively, check out the highest Starbucks in the world on the 35th floor (reservation required!)

3. Marvel at steaming Hell Valley and soak is a hot spring spa 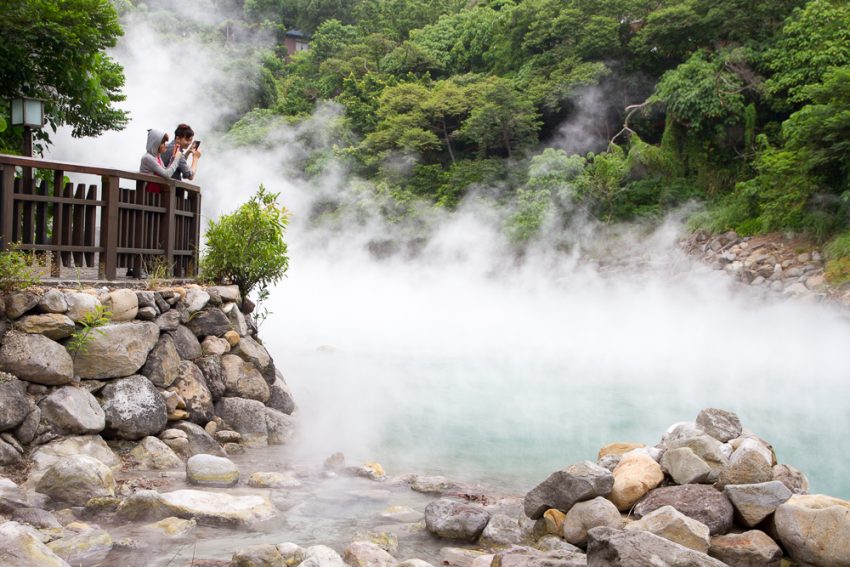 It’s hard to believe the primeval landscape of Hell Valley exists right in Taipei City, at the foot of Yangming Mountain, a dormant volcano. This enormous thermal spring is the source of all the nearby hot spring spas.

After you reach the top, enjoy a pot of tea (or tea flavored ice cream) while enjoying the views. For some solitude, you can hike to Silver Stream Cave and Waterfall, a tiny temple buried in the jungle.

The best budget choice is to grab a sushi set to go and savor it at one of the standing tables outside. Beer & wine is available for take-away, too! 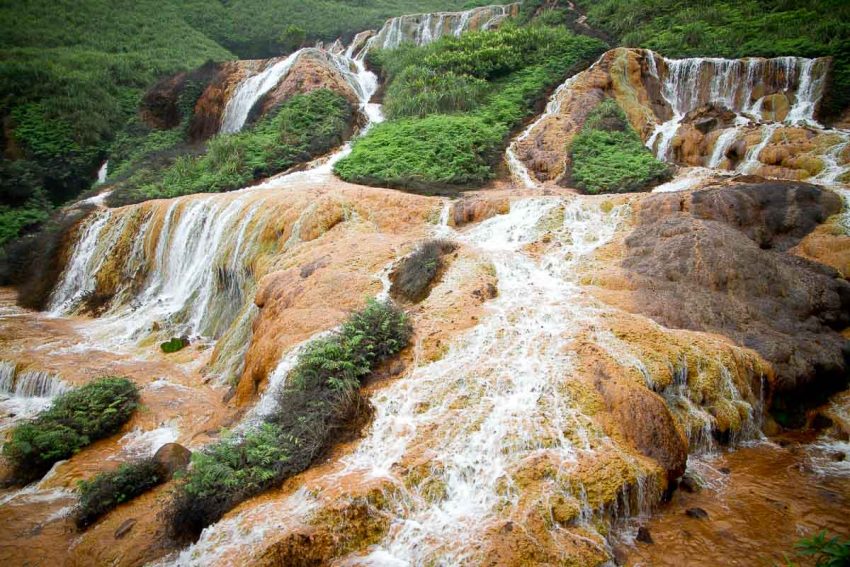 One of the must-do day trips from Taipei is Jiufen and Jinguashi. Jiufen is a deserted mining town that is now attracting new masses of visitors, who come for its old-timey market, leading upstairs through the village. Try the local specialty, taro and sweet potato balls over ice, or enjoy tea with a view down to the Pacific Ocean.

Nearby Jinguashi Gold Ecological park features a gold museum, remains of a Shinto shrine, and a Golden Waterfall. There are also great hikes in the area!

Keelung’s Miaokou night market is my favorite in Taiwan, with its gorgeous rows of lanterns, super fresh seafood, and proximity to the sea. Only a 45-minute train ride from Taipei, it’s worth the trip!

For an amazing view of the port, check out the Buddhist playground atop Dashawan Mountain in town. What is a Buddhist playground, you say? Well, it’s a combination of Buddhist statues, such as the huge Kuanyin statue that can be seen from most parts of town (you can climb stairs inside the statue to the top of her head!) and children’s games and animal cars.

The narrow gauge Pingxi train line branches off from the main east coast railway route, veering inland to a number of tiny villages and waterfalls. My personal favorite is Sandiaoling, a hike featuring several picturesque falls, one of which you climb into a cave behind.

Get off at Shifen for Shifen Waterfall, the broadest in Taiwan. Shifen is also where people set off sky lanterns, but for environmental reasons, we don’t recommend doing this. You can also get off at Pingxi station to climb the Pingxi crags, a group of dramatic vertical crags in the jungle.

9. Try the most exhilarating hike in the greater Taipei area

If scaling death-defying cliffs with rope ladders is your thing, then try Wu Liao Jian, a fantastic day hike. If you are of average fitness level or above, it’s more terrifying than difficult, but the scenery is truly awesome.

The hike is located in Sanxia district, famous for its Old Street and gorgeous Zushi temple.

10. Buy or make your own ceramics at Yingge, Taiwan’s pottery capital

Yingge, a small district of New Taipei City, is Taiwan’s largest center or pottery. There are more than 800 businesses in the area tied to ceramics, most of them centered on the old street, called Yinngge Pottery Street.

Also pop in to the Yingge Ceramics Museum, which covers everything from traditional wares to modern creative artworks, or try making your own pottery on the Old Street.

If I could only suggest one place to visit in Taiwan, it would be Taroko Gorge. The dramatic walls of this narrow gorge are awe-inspiring to the say the least. The best way to take it all in is by riding through on a bicycle or scooter.

See here for more information on Taroko Gorge, including how to find its secret natural hot spring!

Taiwan’s sparsely populated east coast features some of Taiwan’s best scenery. Start at the Qingshui Cliffs, a coastal highway where sheer bluffs spill far, far down to the sea below.

There are two parallel highways running from Hualien down the east coast to Taitung, one right on the coast and another inland, so you can take one going down, and another coming back.

13. See a mountain slope covered in daylilies at 60-Stone Mountain

On the inland route down the east coast, don’t miss 60-Stone Mountain in summer, when the mountain’s slopes are covered in flowering orange daylilies.

See Also  Childhood Adventures by the Sea in Maine

14. Soak in a salt-water hot spring on Green Island 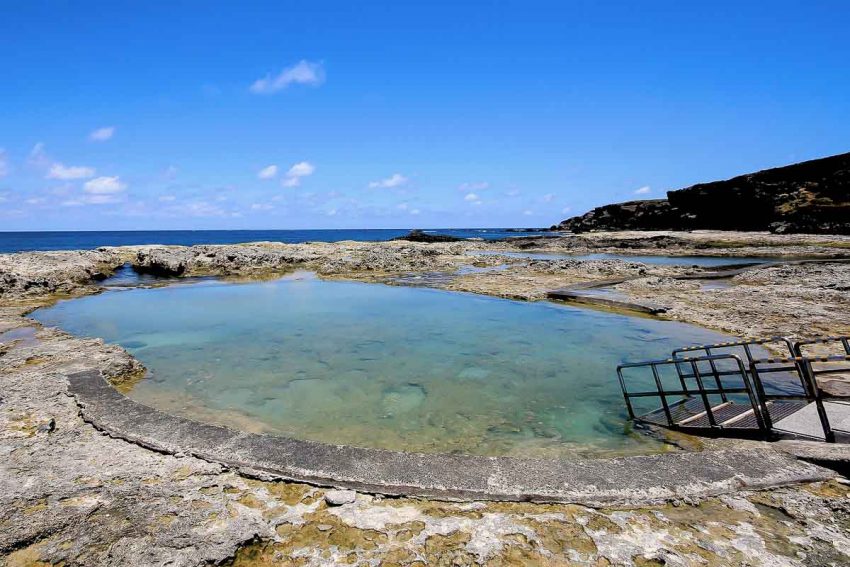 Green Island is a little island paradise off the southeastern coast of Taiwan. What used to be a prison island now offers some of the best snorkeling and scuba in Taiwan. Riding a scooter around its gorgeous coastline is a must.

For something really unique (OK, there are two others in the world), go for a soak in the saltwater hot spring, where you are serenaded by the sound of ocean waves splashing on the shore right beside you while you bathe.

15. Rock out at Taiwan’s longest-running indie music festival on the southern tip of Taiwan

Kenting National Park is Taiwan’s most famous beach resort. Starting in 1995, Spring Scream takes places on the long weekend at the beginning of April every year.

Spring Scream doesn’t take place on one of Kenting’s famous beaches, but rather at the lighthouse at the very southern tip of Taiwan. The idea really caught on, so now there are other music festivals taking place throughout the national park on the same weekend, and the whole area is really popular with local beachgoers any weekend when the weather’s fine.

The cycling route around Sun Moon Lake has been called one of the top-10 cycling routes in the world. This easy ride takes in several temples and a lakeside aboriginal village with a great night market.

For a more elevated and awe-inspiring view of the lake, take the Sun Moon Lake Ropeway, but you can give the theme park at the top a miss.

17. Watch the sunrise over a sea of clouds at Alishan 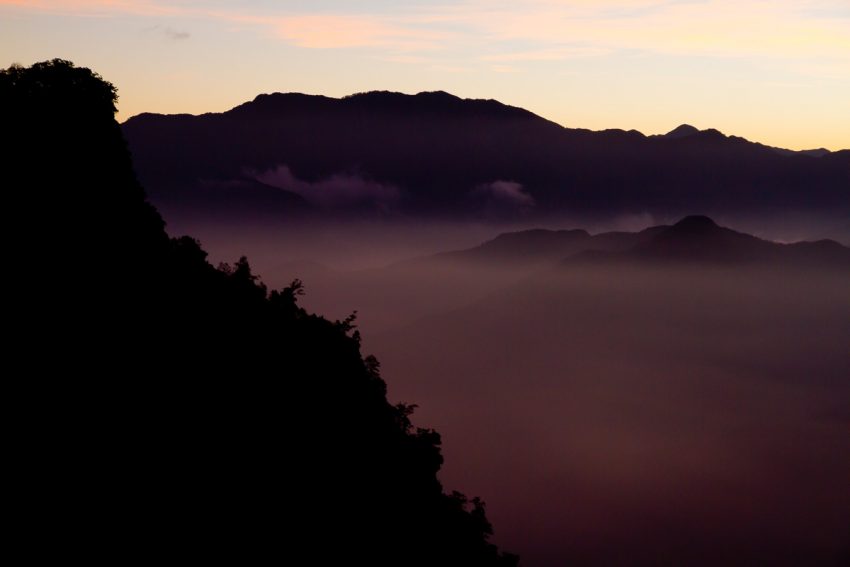 It may be the signature tourist thing to do in Taiwan, but there’s a reason for that. Alishan (or “Mount Ali”) sunrises overseas of clouds are truly inspiring. Tourists wake up before dawn to crowd onto a small train line to the classic viewpoint. You can also hike up in the dark, or find non-crowded viewpoints.

In the daytime, you can trek through the area’s forests of giant cypress trees. If you prefer to avoid the tourist masses, then try the next two ideas, which are both in the same area.

On the way up to Alishan, most tourists don’t realize they are passing right through tea country that produces some of Taiwan’s most internationally renowned teas.

For a very local experience, book a night at one of the guesthouses in Shizhuo, a little village in the midst of the tea terraces. Many of the guesthouses are run by tea farmers themselves, and the sunsets and sunrises over terraced tea fields might just be better than the famous Alishan ones.

19. Hike through a bamboo forest 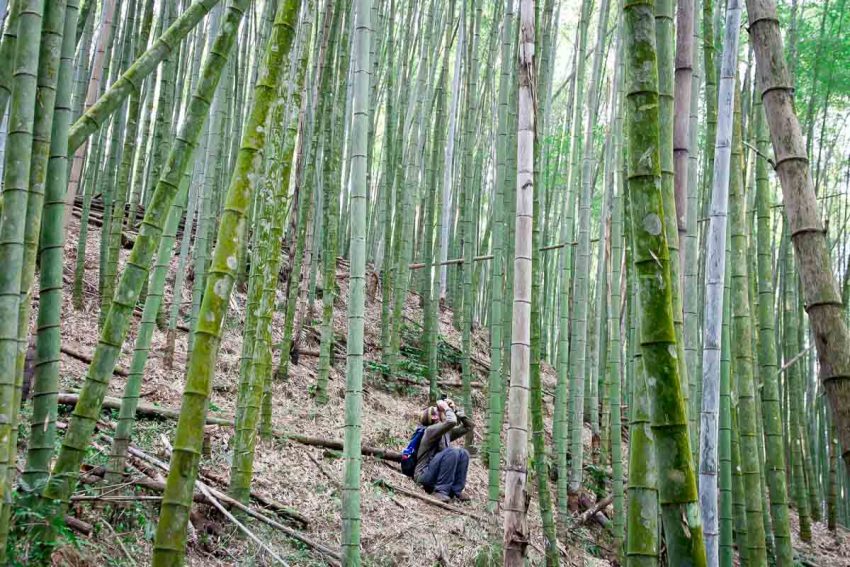 Another little-known highlight in the Alishan area is the Fenqihu to Ruili Old Trail, which meanders through a dense bamboo forest, where you will be hypnotized by the sound of creaking bamboo stalks.

There are only a few buses per day to Ruili, and you can spend the night in Fenqihu or take the Alishan forest railway back down the mountain (or bus up to Alishan; the final train leg between Fenqihu and Alishan was destroyed in a typhoon).

The climb up Yu Shan (Jade Mountain) is not terribly difficult, but you will need permits and hut bookings, so its best to go with a local trekking group. The return trek usually takes two full days.

For me, it was not at Alishan but from the peak of Jade Mountain that I first witnessed the “sea of clouds” phenomenon at sunrise. It was one of, if not my top experience in my 10 years in Taiwan.

Another small train line goes up to the day market town of Neiwan in the mountains of Hsinchu County. With many Hakka, a once-nomadic people originating from central China, in the area, it’s a good place to sample Hakka treats like traditional mochi and Hakka pounded tea.

Nearby in Jianshi township, you can find off-the-beaten-track hot springs, campsites, and plenty of spots to jump in the river.

22. Witness the Matsu pilgrimage, the world’s largest pilgrimage to a goddess

Every year on the birthday of Matsu, the goddess of the sea, the largest pilgrimage for a goddess in the world takes place in Taiwan, traversing four counties on the west coast, starting and finishing at Zhenlan Temple in Taichung.

Come for the first or last day, when thousands of devotees crowd into the streets, igniting firecrackers, burning ghost money, and watching traditional street parades. 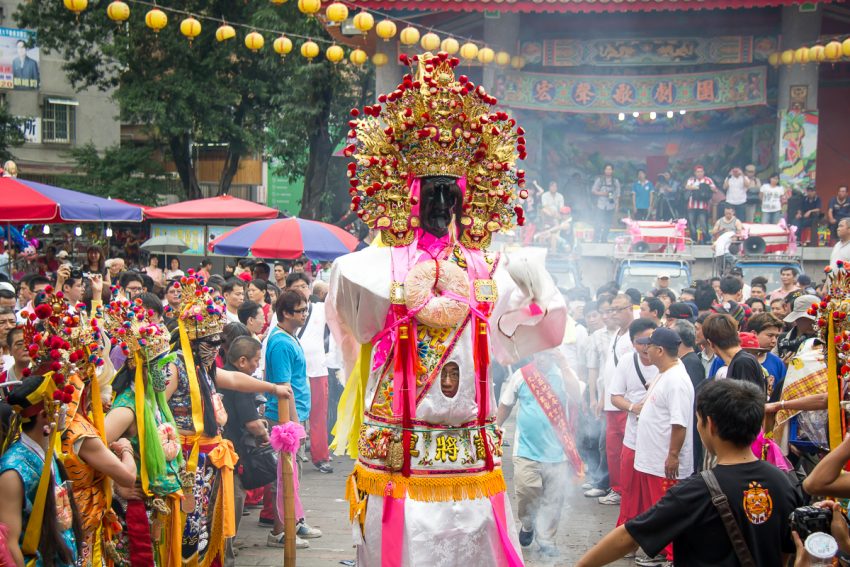 Taiwan’s ancient capital is a wonderland for temple lovers, with the Confucius Temple, God of War Temple, Matsu Temple, and City God Temple being some of the best. History lovers can check out the Anping Fort, built by the Dutch before they were defeated by a local army led by Koxinga.

Tainan is also highly regarded by all Taiwanese for its delicious food. The combination of temples, history, and food make it a hotbed of traditional Taiwanese culture and many visitors and expats fall in love with the city.

24. Cover your body in thermal mud at Guanziling Hot Spring

Here’s another off-the-beaten-track idea for those looking for a unique experience: Guanziling features one of only three mud hot springs in the world, as well as a cave flame nearby that never goes out.

Besides the mud rubs, even the regular hot spring pools here consist of translucent, slightly muddy water, which feels slippery smooth on the skin.

25. Wonder why Foguangshan Monastery had to be built THAT big

Last but certainly not least, the enormous temple complex of Foguangshan in Kaohsiung is one of Taiwan’s must-see sights.

The older main monastery covers a huge area and features rooms where tourists can spend the night.

An equally expansive new area called the Foguangshan Buddha Museum was added in 2011 to house a Buddha tooth relic. Here a grand walkway flanked with pagodas leads to a 108-meter Buddha, the largest in Taiwan.

Nick Kembel has been living in Taiwan for 10 years and is the author of Taiwan in the Eyes of a Foreigner. You can find more of his articles on Taiwan and East Asia at Spiritual Travels or follow him on Facebook.