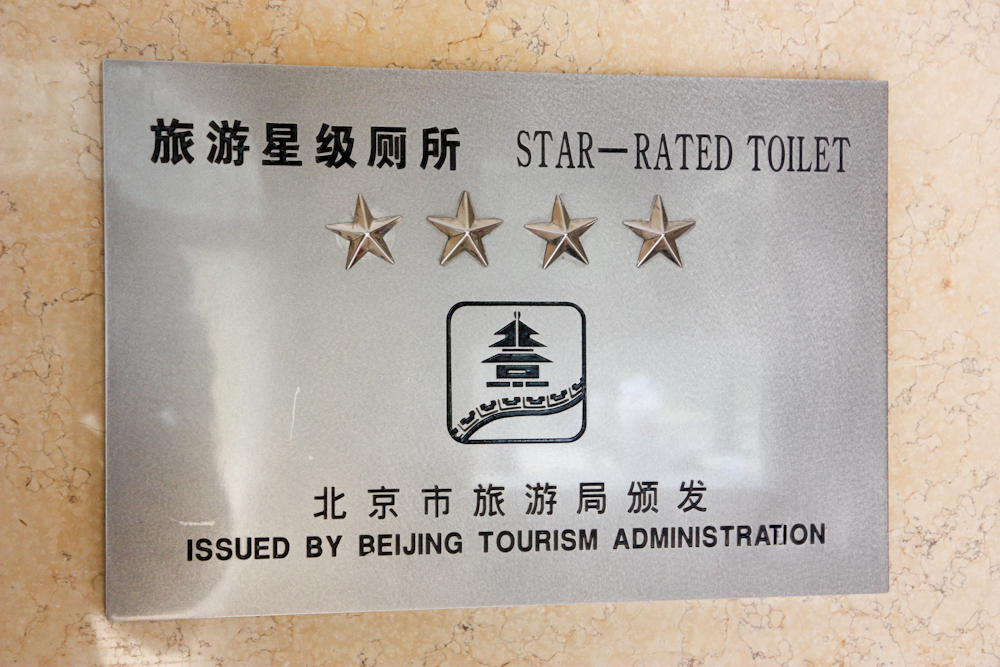 As we walked through the Temple of Heaven park in Beijing, we realized that we had to do what everyone eventually must do: use the toilet. After roaming through the stunningly beautiful temples and immaculate gardens, we realized that it had, well, been awhile since the last time. You know how it goes….

As public toilets in China are quite prevalent (thank God!), we quickly found one in the middle of the park. Upon entering, we were greeted with a large sign that informed us that this particular toilet facility had received a four star rating from the Beijing Tourism Administration! “This is amazing!” We thought to ourselves. So far on our trip to China, we had experienced a variety of toilet situations, and were very relieved to see this sign. As you can see from the photo, there was even toilet paper! However, the toilet paper was not actually in the toilet stalls, but instead mounted on the wall by the front door under the four star rating sign.

And then we thought about this for a minute. If your country needs to have a rating system for toilets, then what does that say about the overall toilet situation?

Due to our recent experience with toilets in China, we did not actually need to answer this question for ourselves. We had first hand knowledge (or perhaps an expertise) on this subject. This expertise primarily came from several of the yet unrated toilets that we had been forced to live with during the past week or so.

For example, here is a photo of the shared toilet (for the rooms without their own bathrooms) at our hotel in Beijing.

On first glance, you can’t help but notice the squat variety of toilets available in this facility. But wait! Upon further scrutiny, this photo reveals so much more cultural information for our inner social anthropologists.

First, notice how there are two toilets, and yet no wall between them. This is for when you and a buddy want to share that special moment. Second, notice the shower handle on the left (the shower faucet is higher up and out of the frame on the left wall). This means that you must stand over one of the toilets in order to shower. And there’s no shower curtain. Be cautious of where you place your towel.

And for those of you that have never seen a squat toilet before, you will probably now realize that this is not just a hole in the dirt. Yes, it flushes. And yes, it is a porcelain fixture, manufactured at a factory with millions of others just like it.

Despite the negative opinion that I’m probably presenting of China right now, you should know that it really is an amazing country and absolutely worth visiting. Most of the time you can avoid situations like this. But even if you do end up at a toilet like this, and manage to not catch some disease, you’ll still have a good story to tell, right?