How much does it cost to travel to Mostar?

How much money will you need for your trip to Mostar? You should plan to spend around KM102 ($63) per day on your vacation in Mostar, which is the average daily price based on the expenses of other visitors. Past travelers have spent, on average, KM38 ($24) on meals for one day and KM13 ($7.85) on local transportation. Also, the average hotel price in Mostar for a couple is KM107 ($66). So, a trip to Mostar for two people for one week costs on average KM1,432 ($886). All of these average travel prices have been collected from other travelers to help you plan your own travel budget.

A vacation to Mostar for one week usually costs around KM716 for one person. So, a trip to Mostar for two people costs around KM1,432 for one week. A trip for two weeks for two people costs KM2,863 in Mostar. If you're traveling as a family of three or four people, the price person often goes down because kid's tickets are cheaper and hotel rooms can be shared. If you travel slower over a longer period of time then your daily budget will also go down. Two people traveling together for one month in Mostar can often have a lower daily budget per person than one person traveling alone for one week.


How expensive is Mostar? How much money do I need for Mostar?

How much does a trip to Mostar cost? Is Mostar expensive? The average Mostar trip cost is broken down by category here. All of these Mostar prices are calculated from the budgets of real travelers.

Find a hostel, guesthouse, or B&B in Mostar

What did other people spend on Food in Mostar?

Typical prices for Food in Mostar are listed below. These actual costs are from real travelers and can give you an idea of the prices in Mostar, but your costs will vary based on your travel style.

How much does it cost to go to Mostar? Naturally, it depends on the dates. We recommend SkyScanner because they can find the best deals across all airlines.

The price of renting a car in Mostar will depends on dates, the type of car, the location, and your age. We recommend SkyScanner because they can find the best deals across all car rental companies.

What did other people spend on Transportation in Mostar?

Typical prices for Transportation in Mostar are listed below. These actual costs are from real travelers and can give you an idea of the prices in Mostar, but your costs will vary based on your travel style.

Tips and Handouts Budget in Mostar

What did other people spend on Alcohol in Mostar?

Typical prices for Alcohol in Mostar are listed below. These actual costs are from real travelers and can give you an idea of the prices in Mostar, but your costs will vary based on your travel style.

Mostar On a Budget

Mostar Old Town
Mostar has historically been a culturally and ethnically diverse city. It was heavily bombed during the country's civil war and many of the city's most important buildings and structures were destroyed. Most significantly, the city's Old Bridge, Stari Most, was destoryed. The bridge was rebuilt through an international effort just eleven years after the war. It was completed in 2004 and included pieces of the original bridge. Today, much of the city has been rebuilt and the city is a beautiful and impressive travel destination. The old town still has much of its original charm and it is a great place to explore.

Mostar is a beautiful town set amid the mountains with the Neretva river flowing through it. There are some museums and interesting sites around town, but the true appeal is the old bridge and the town itself. You can pass much time just wandering through town and poking your head in some shops. The locals are quite friendly and eager to greet you as well.

Mostar's most famous and significant site is its old bridge, called Stari Most, which crosses the Neretva river. The bridge was originally constructed by the Turks in 1566, but was destroyed during the civil war in 1993. It was later rebuilt as a symbol of recovery in 2004. The rebuilt bridge can be seen today, and is surrounded on both sides of the river by the beautiful old town.

There is an Old Bridge Museum near the bridge that has exhibits on the history of the bridge and a view of the town from the top.

Muslibegovica House is open between spring and fall. It was built over 300 years ago and is a beautiful house from the Ottoman period.

Other interesting places to visit include the History Museum of Herzegovina, Koski Mehmed Pasha Mosque, Karadjoz-Bey Mosque, the cemetery, Biscevica House and the Large Cross on the Hill.

The city's old town is where most tourists spend the majority of their time. This is where you will find the famous bridge and the largest concentration of historic and cultural sights. There are also many shops and restaurants that attract visitors.

A visit to Mostar is really about soaking up the atmosphere. It's interesting to sit by the bridge and watch the locals dive into the river below. There is actually a Mostar Diving Club that is made up of local men who take the plunge. Do not attempt this yourself. The waters are a constant 12 degrees Celsius.

The city was divided by the war in 1993 and today you can walk along the former front line on Bulevar Revolucije. The line split the Croats on the West and the Bosniaks on the East. It is a truly sad place to visit.

The town is small, but there are still a decent number of restaurants that range in price and style. Budget options include pizza, pastries, and traditional Bosnian food. Slightly more expensive restaurants may offer a view of the river and the bridge. The food is relatively consistent in quality, so what you pay for is the view. It is well worth the splurge (and it's not a significant splurge).

There are some good bars in the old town as well if you're hoping to hear some music and grab a drink. They each have their own atmosphere and it's a great way to meet people and soak up some local culture.

Pastry shops and desserts are common throughout the region and this remains true in Mostar. These decadent desserts are surprisingly cheap and of good quality. A great way to pass the night is to grab a dessert and enjoy it as you take in the view of the bridge over the river.

Mostar is a small town and you can easily walk throughout the old town without much effort. Streets may be uneven so you should watch your step.

The most beautiful way to reach Mostar is by train from Sarajevo. The mountain scenery is absolutely beautiful and there are a series of tunnels that take you through the mountains. It's not only the cheapest way to reach the city, but also the most impressive. The trip takes about two and a half hours. Some of the facilities are dated though, so if you're looking for comfort, the bus is actually the better option.

Train and Bus Prices
The best prices for buses and trains in Bosnia and Herzegowina can be found on Omio (formerly GoEuro). They let you search across all train, bus, and plane routes throughout the region. 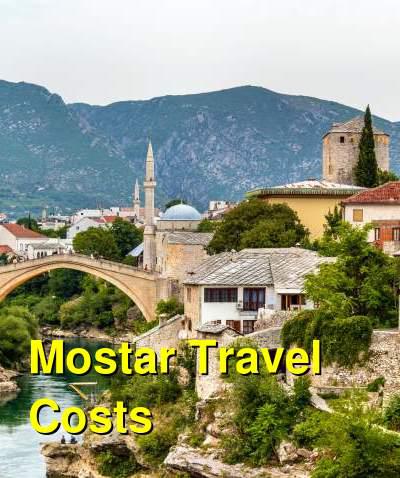 Stay with a Local

By backpackguru in Accommodation
Mostar is a wonderful town that you can easily arrive in and find accommodations. Many local residents rent rooms out of their apartments for a very reasonable rate. They will either greet you upon arrival, or you can head to the tourist information center for some help. Do remember to take your shoes off when you enter their home. Many people in town are religious and consider this part of their custom. It's best to respect that.