How much does it cost to travel to Sarajevo?

How much money will you need for your trip to Sarajevo? You should plan to spend around KM103 ($62) per day on your vacation in Sarajevo, which is the average daily price based on the expenses of other visitors. Past travelers have spent, on average, KM46 ($28) on meals for one day and KM10 ($6.21) on local transportation. Also, the average hotel price in Sarajevo for a couple is KM78 ($47). So, a trip to Sarajevo for two people for one week costs on average KM1,445 ($871). All of these average travel prices have been collected from other travelers to help you plan your own travel budget.

A vacation to Sarajevo for one week usually costs around KM722 for one person. So, a trip to Sarajevo for two people costs around KM1,445 for one week. A trip for two weeks for two people costs KM2,889 in Sarajevo. If you're traveling as a family of three or four people, the price person often goes down because kid's tickets are cheaper and hotel rooms can be shared. If you travel slower over a longer period of time then your daily budget will also go down. Two people traveling together for one month in Sarajevo can often have a lower daily budget per person than one person traveling alone for one week.


How expensive is Sarajevo?

How much does a trip to Sarajevo cost? Is Sarajevo expensive? The average Sarajevo trip cost is broken down by category here. All of these Sarajevo prices are calculated from the budgets of real travelers.

While meal prices in Sarajevo can vary, the average cost of food in Sarajevo is KM46 per day. Based on the spending habits of previous travelers, when dining out an average meal in Sarajevo should cost around KM19 per person. Breakfast prices are usually a little cheaper than lunch or dinner. The price of food in sit-down restaurants in Sarajevo is often higher than fast food prices or street food prices.

How much does it cost to go to Sarajevo? Naturally, it depends on the dates. We recommend SkyScanner or Kayak because they can find the best deals across all of the airlines.

How much money do I need for Sarajevo?

Find a hostel, guesthouse, or B&B in Sarajevo

Sarajevo On a Budget 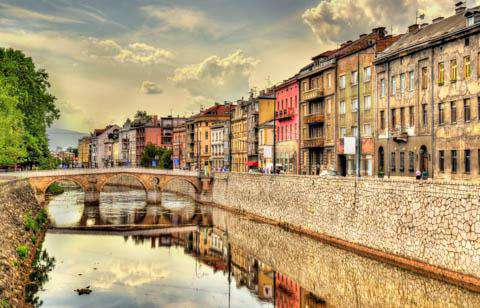 Sarajevo
Sarajevo is the capital city of Bosnia and is one of the most culturally and historically interesting cities to visit in Europe. The city was at the crossroads where the Eastern and Western Roman Empires divided, and the Roman Catholic and Eastern Orthodox Churches divided. Today it is most associated with the Civil War that occurred here between 1992 and 1995. There are still many remnants of the war left, from the cemeteries that dot the countryside to the leftover damage done by bombs. Despite its brutal history, Sarajevo has begun to thrive again, both economically and as a tourist destination.

The people in Sarajevo are incredibly welcoming and friendly. There is a wonderful old town that has many market streets where you can buy anything from produce to souvenir tea sets. The old world architecture is unlike anything you'll find elsewhere in Europe. Head into the surrounding hills if you're looking to get out of town and see daily suburban life in Bosnia. It does make for an enjoyable walk and you can enjoy good views looking back at the city. Do stay on the paved roads and be aware of stray dogs in the area. Rabies is not that uncommon.

Sarajevo's climate has four seasons with January being the coldest month and July the warmest. It is generally cloudier during the winter months and clear during the summer, but rain falls consistently throughout the year. Winter sports are common and in 1984 the city hosted the Winter Olympics.

Sarajevo proper has four main districts including Centar, Novi Grad (the New City), Novo Sarajevo (New Sarajevo) and Stari Grad (the Old City). The Old City has many cobbled streets, interesting mosques and a variety of shops that appeal to tourists. It is a unique experience to hear the call-to-prayer and get lost in the history and culture that make up this area.

Sarajevo also has a great night life. There are many different pubs, bars and clubs that each have their own style and atmosphere. The most popular nights for going out are Thursday, Friday and Saturday nights. Thursday is particularly popular for the student population.

Bosnian food is delicious and Sarajevo has some of the best. Budget food options are plentiful and usually incredibly filling. Burek is a local specialty and is a meat pie that is made with phyllo and seasoned meat, cheese, and vegetables. It's usually served with a generous helping of a yogurt cream sauce that is comparable to sour cream. You'll also find pita sandwiches, pizza, and cevapi around town, all for very reasonable prices. Cafes are also quite popular in Sarajevo and they're a great place to try a cup of Bosnian coffee. It's rich in flavor and for some is an acquired taste, but many find it quite delicious.

Navigating the streets of Sarajevo can be difficult because the streets are not well labeled. It's recommended that you buy a map before you head out to explore the city. This will save you at least some frustration. There is public transportation throughout the city. There's a tram that makes a counter clockwise loop through the central district. Make sure you validate your ticket as soon as you board the tram. Ticket inspectors are not uncommon and you should not attempt to ride without a ticket.

Use caution when taking a taxi as they are prone to overcharging tourists, particularly when you pick them up at the train or bus station. Make sure you have some idea how much the trip should cost. If possible, try to arrange a pickup through your hotel in advance, to ensure that you avoid any sort of taxi scam.

Train and Bus Prices
The best prices for buses and trains in Bosnia and Herzegowina can be found on Omio (formerly GoEuro). They let you search across all train, bus, and plane routes throughout the region.

By backpackguru in Food
Bosnian food is absolutely delicious! It can be hard for vegetarians to find options, but if you're not a vegetarian, the selection is delicious. Definitely try the Bosnian burek, which is a local fast food specialty. Burek basically consists of tubes of phyllo bread stuffed with a meat concoction, spiraled into a pan, and baked. It's served with a generous portion of sour cream. It's definitely not a healthy option, but it's filling and cheap, and a must try experience while you're traveling in Bosnia.