A Travel Price Comparison for United Kingdom London vs. Belfast for Vacations, Tours, and Honeymoons

Should you visit London or Belfast?

Which city is more affordable and which is best for your travel style? If you're trying to figure out where to go next, comparing the travel costs between London and Belfast can help you decide which place is right for you.

Belfast is the capital of Northern Ireland and the second largest city on the island of Ireland after Dublin. It has a population of about 270,000 and almost 500,000 in the metropolitan area. It's located on the mouth of the River Lagan and is set between many low hills that rise up around it.

One of the most famous, and tragic times in Belfast's history is referred to as "The Troubles." During this time, between 1969 and 1997, there were many bomb and gun attacks throughout the city. This left many areas as essentially no-go zones. Neighborhoods became completely lawless do to the lack of security and the damage is still visible today in some areas. In 1998 the Good Friday Agreement was signed and much of the politically motivated violence ended. The city actually received praise recently as the safest city in the UK based on crime rate. Tourism is growing and many visitors enjoy seeing this less popular travel destination. The city has a lot of character and will give you an interesting take on Irish and British history.

Belfast has a temperate climate and temperature and precipitation have little variation throughout the year. The climate is influenced by the warming effects of the Gulf Stream, making it warmer than many cities that are found at the same latitude. Rain is common with precipitation falling an average of 157 days a year. Snow is much less common, although it does happen about ten days a year. The warmest days during the summer may reach a temperature around 25 degrees Celsius and the coldest days have lows that drop just below freezing.

Which city is cheaper, Belfast or London?

The average daily cost (per person) in London is £145, while the average daily cost in Belfast is £106. These costs include accommodation (assuming double occupancy, so the traveler is sharing the room), food, transportation, and entertainment. While every person is different, these costs are an average of past travelers in each city. Below is a breakdown of travel costs for London and Belfast in more detail.

A hotel room in Belfast is about £110 This assumes double occupancy and modest accommodations.

The cost of a taxi ride in Belfast is significantly more than public transportation. On average, past travelers have spent £11 per person, per day, on local transportation in Belfast.

Hired Cars and Shuttles in Belfast

Some specific examples of transportation prices in Belfast:

Is it cheaper to fly into London or Belfast?

Prices for flights to both Belfast and London change regularly based on dates and travel demand. We suggest you find the best prices for your next trip on Kayak, because you can compare the cost of flights across multiple airlines for your prefered dates.

In Belfast travelers spend around £40 a day on food. You can save money by choosing casual restaurants or food stalls, or you can spend plenty more by dining in nicer restaurants at every meal.

Also, here are some specific examples of food and dining related activities in Belfast.

Entertainment and activities in Belfast typically cost an average of £15 per person, per day. This includes fees paid for admission tickets to museums and attractions, day tours, and other sightseeing expenses.

Some typical examples of activities, tours, and entrance ticket prices in Belfast are as follows:

Tours and Activities in Belfast

Some specific costs of activities, tours, and entrance tickets for Belfast are as follows:

The average person spends about £6.29 on alcoholic beverages in Belfast per day. The more you spend on alcohol, the more fun you might be having despite your higher budget.

Sample the Local Flavors in Belfast

Some specific costs for nightlife related activities in Belfast:

When we compare the travel costs of actual travelers between London and Belfast, we can see that London is more expensive. And not only is Belfast much less expensive, but it is actually a significantly cheaper destination. So, traveling to Belfast would let you spend less money overall. Or, you could decide to spend more money in Belfast and be able to afford a more luxurious travel style by staying in nicer hotels, eating at more expensive restaurants, taking tours, and experiencing more activities. The same level of travel in London would naturally cost you much more money, so you would probably want to keep your budget a little tighter in London than you might in Belfast.

The Best Affordable Hostels in BelfastLondonBirminghamGlasgowLiverpoolEdinburgh 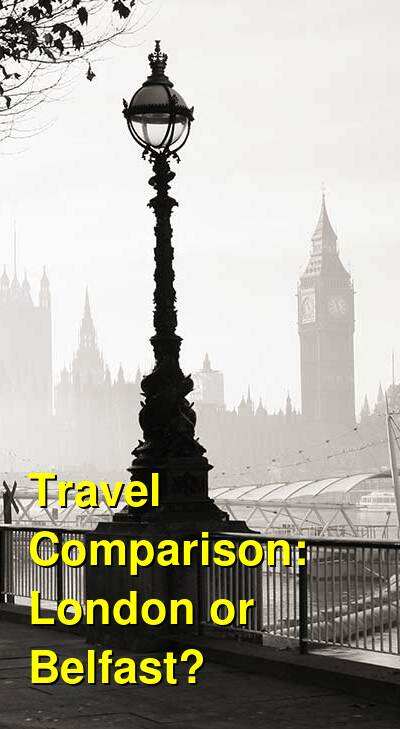