How much does it cost to travel to Paphos?

How much money will you need for your trip to Paphos? You should plan to spend around €77 ($92) per day on your vacation in Paphos, which is the average daily price based on the expenses of other visitors. Past travelers have spent, on average, €30 ($36) on meals for one day and €9.29 ($11) on local transportation. Also, the average hotel price in Paphos for a couple is €75 ($90). So, a trip to Paphos for two people for one week costs on average €1,078 ($1,292). All of these average travel prices have been collected from other travelers to help you plan your own travel budget.

A vacation to Paphos for one week usually costs around €539 for one person. So, a trip to Paphos for two people costs around €1,078 for one week. A trip for two weeks for two people costs €2,157 in Paphos. If you're traveling as a family of three or four people, the price person often goes down because kid's tickets are cheaper and hotel rooms can be shared. If you travel slower over a longer period of time then your daily budget will also go down. Two people traveling together for one month in Paphos can often have a lower daily budget per person than one person traveling alone for one week.


How expensive is Paphos? How much money do I need for Paphos?

How much does a trip to Paphos cost? Is Paphos expensive? The average Paphos trip cost is broken down by category here. All of these Paphos prices are calculated from the budgets of real travelers.

How much do vacation rentals cost in Paphos? Prices vary by location, date, size of the place, and the level of luxury. See below for options.

How much does it cost to go to Paphos? Naturally, it depends on the dates. We recommend SkyScanner because they can find the best deals across all airlines.

The price of renting a car in Paphos will depends on dates, the type of car, the location, and your age. We recommend SkyScanner because they can find the best deals across all car rental companies.

Paphos On a Budget

Paphos, Cyprus
Located on the southwestern tip of Cyprus, Paphos has many different archaeological sights and it is renowned as the birthplace of the Greek goddess Aphrodite. The town is situated between the coast and the Troodos Mountains and it has grown in recent years as a tourist destination. As such, the local government has made efforts to improve the quality of the tourism infrastructure including investing in hotels, restaurants and transportation. There is also a commercial center to the city as well as a newly built "promenade" that travels from the marina along a long coastal path. This route offers excellent views, especially during the morning or evening hours when the sun is low.

The climate in Paphos is subtropical semi arid. It is most likely to rain between the months of November and March, and summer is the driest season, with rain rarely occurring. It is quite humid in the summer months though, which can make the temperatures feel even hotter.

Popular sights in and around Paphos include the Paphos Archaeological Park, the Tombs of the Kings, Paphos Fort, Tala Village and the Episkopi Environmental Centre and Village. At the Paphos Archaeological Park you'll find a large number of sites such as the House of Dionysos and the House of Theseus. The Tombs of the Kings has cave style tombs for high officials and wealthy civilians that date back to the fourth century. There are some very impressive larger tombs that are cut from solid rock and have a great view. At the end of the marina, Paphos Fort dates back to 1586. Tala Village is a tradtitional village that has a large expat community and the Agio Neophytos Monastery. There are also some good restaurants. Episkopi Environmental Centre and Village is in the Ezouza Valley and has a nature trail and golf course.

The city can be divided into two sections. The upper section, or Ktima Paphos, is located up the hill and it is the commercial center of town. This is where you'll find the majority of the city's shopping areas and government buildings. The lower section, Kato Paphos, is where tourists spend the majority of their time. This is where you'll find the highest concentration of archaeological sights and attractions. It's also where you'll find the majority of hotels, tavernas and restaurants that cater to visitors. In recent years the city has made an effort to improve this part of town and make it more appealing to visitors. There are many hotels and bars that line the coastline, which stretches for several kilometers. There's also a newly built waterfront promenade that follows the coastal path from the marina.

Many visitors enjoy any number of activities around town. These include visiting the Paphos Bird Park, going to the Aphrodite Water Park, and taking a walk along the beautiful coastal path that connects the Tombs of the Kings to Geroskipou Beach.

There is a large diversity of restaurants and cuisine styles in Paphos. There are restaurants that meet all budget types and food preference. If you're looking for high end, fine dining, then check out the five star restaurant IL Classico or any of the restaurants at the luxury hotels around town. There are also many international options that are usually affordable and range from Chinese to Mexican, or pizza and pasta. You really should try the traditional Cypriot meze though. It is best experienced in an off the beaten path restaurant in a smaller village outside of town. The traditional tavernas are the perfect way to get a taste of the Cyprus cuisine. There are also your typical fast food restaurants around town, including KFC and McDonalds.

Make sure you try some local wines while you're in the area as well. The Vasilias Nikoklis Inn has a good selection of local wines to choose from.

Both of the two sections in Paphos can be navigated on foot as they are quite small and easy to walk around. If you're headed up the hill to the harbour area, it's possible to take a bus, and this may be your easiest option. Buses provide access to Coral Bay, Polis and several other local villages as well. If you're hoping to travel further out of town into the Troodos Mountains, the Akamas Peninsua or anywhere else that is more off the beaten path, it would be most helpful to have your own vehicle. Do take note that summer temperatures can be quite hot and humid, reaching in excess of 33 degrees Celsius. If you rent a car during these months, confirm that it has a working air conditioner.

Train and Bus Prices
The best prices for buses and trains in Cyprus can be found on Omio (formerly GoEuro). They let you search across all train, bus, and plane routes throughout the region. 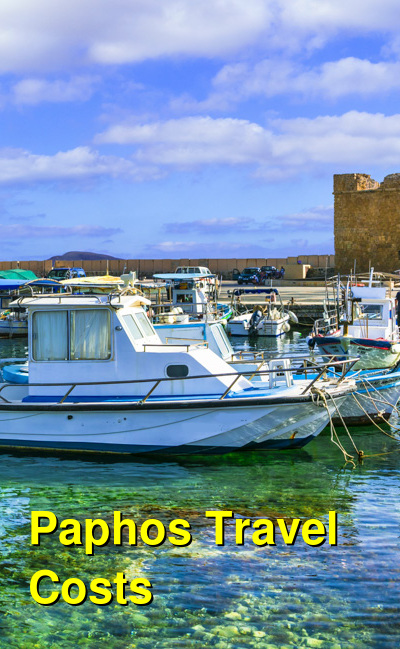