How much does it cost to travel to Aswan?

How much money will you need for your trip to Aswan? You should plan to spend around E£295 ($19) per day on your vacation in Aswan, which is the average daily price based on the expenses of other visitors. Past travelers have spent, on average, E£92 ($5.86) on meals for one day and E£109 ($6.93) on local transportation. Also, the average hotel price in Aswan for a couple is E£250 ($16). So, a trip to Aswan for two people for one week costs on average E£4,136 ($264). All of these average travel prices have been collected from other travelers to help you plan your own travel budget.

A vacation to Aswan for one week usually costs around E£2,068 for one person. So, a trip to Aswan for two people costs around E£4,136 for one week. A trip for two weeks for two people costs E£8,272 in Aswan. If you're traveling as a family of three or four people, the price person often goes down because kid's tickets are cheaper and hotel rooms can be shared. If you travel slower over a longer period of time then your daily budget will also go down. Two people traveling together for one month in Aswan can often have a lower daily budget per person than one person traveling alone for one week.


How expensive is Aswan? How much money do I need for Aswan?

How much does a trip to Aswan cost? Is Aswan expensive? The average Aswan trip cost is broken down by category here. All of these Aswan prices are calculated from the budgets of real travelers.

How much do vacation rentals cost in Aswan? Prices vary by location, date, size of the place, and the level of luxury. See below for options.

How much does it cost to go to Aswan? Naturally, it depends on the dates. We recommend SkyScanner because they can find the best deals across all airlines.

The price of renting a car in Aswan will depends on dates, the type of car, the location, and your age. We recommend SkyScanner because they can find the best deals across all car rental companies.

What did other people spend on Entertainment in Aswan?

Typical prices for Entertainment in Aswan are listed below. These actual costs are from real travelers and can give you an idea of the prices in Aswan, but your costs will vary based on your travel style.

Tips and Handouts Budget in Aswan

What did other people spend on Water in Aswan?

Typical prices for Water in Aswan are listed below. These actual costs are from real travelers and can give you an idea of the prices in Aswan, but your costs will vary based on your travel style.

Budget Hotels in Aswan, Egypt, on the NileCairoAlexandriaLuxorDahabThe Best Affordable Hostels in Cairo

Aswan On a Budget 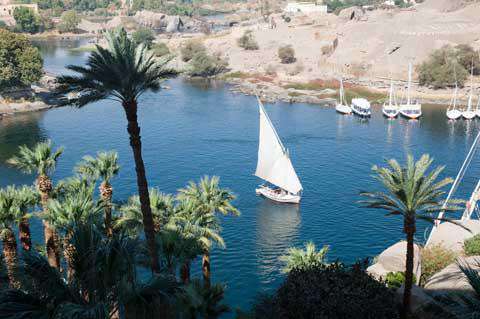 A felucca on the Nile river
Lounging along the Nile like Egyptian royalty is a fantasy for most world travelers. If you want to do it without the hustle and bustle of Cairo, there's always Aswan. This city in the south of Egypt is the smallest of the three major cities on the Nile. Located just below the Aswan Dam and Lake Nasser, Aswan's 275,00 people include a large portion of Nubians  mostly resettled from their flooded homeland.

Immerse yourself in the history of Aswan  Egypt's former gateway to Africa.

For starters, you'll certainly want to grab a cab to the Unfinished Obelisk. Stand in awe at this massive structure carved straight from bedrock. As of now, it is the largest known ancient obelisk. Imagine what it would have looked like if it had been finished. It would have likely stood 42 meters tall and weighed 1,200 tons.

The real historical delight, however, is located on the West Bank. This area is home to the Tomb of the Nobles. Wander through and visit tombs of princes from the old kingdoms all the way up to the time of the Romans. The 6th Dynasty tombs are the most fascinating with hieroglyphic biographies and inscriptions. They tell the tales of the nobleman's journey to Africa. Be warned, many locals will try to block off passages and ask for a small fee for entrance. Give them a simple, "no thanks," and they should leave you alone.

For a really neat experience, take a trip to the Philae Temple. Built as a monument to the Egyptian goddess Isis, this is the last temple built in the classical Egyptian architecture. But this is not where it was originally built in 690 BC. It has been moved by archaeologists to protect it from the flood of Lake Nasser. You still see the original home to the Philae Temple. There is an underwater island with steel columns sticking up, and that is where this beautiful temple once lived.

Another amazing rescue is a bit out of the way, but worth the visit. In the small village of Abu Simbel are stunning temples relocated to the village just before the flood. The Great Temple of Ramses II is massive and intimidating, which is perfect given it was meant to scare off enemies approaching the area as they traveled down the Nile.

For a little more unique background to the area, make a stop at the Nubia Museum. This attraction is rarely visited, so you won't have to deal with many crowds. Opened in 1997, this museum details what was lost beneath Lake Nasser. Beginning in 4500 BC and coming all the way to present day, you'll come across prehistoric artifacts, ancient Coptic and Islamic art and horse armor found in tombs form the 5th and 6th centuries BC.

This region is typically meat for historical sightseeing, but there are activities to explore. You can always rent a bike for a leisurely ride across the Nile, or take a camel ride to the Monastery of St. Simeon.

One opportunity you won't want to miss, though, is a trip to one of the Nubian Villages. A short boat ride takes you to small village where people keep crocodiles as pets. You are welcome to hold them, have a drink and wander the small and sleepy villages of locals.

Because this region has so many tourists from all over the world, most tastes are covered. If you'd like to experience some of the local flavors, however, be sure to order some kafta, kebabs and freshly caught fish.

More than a good meal, though, is a good view. Many restaurants line the Nile and offer a spectacular view any time of day  especially during sunset.

This laid back city is so small, you really could walk or bike everywhere you want to go. However, if you're traveling to the Unfinished Obelisk or the Philae Temple be sure to take a taxi or horse-drawn carriage. As in most areas in Egypt, be prepared to haggle.

Crossing the river is most convenient in a motorboat or felucca  a rented sailboat. Since the operators of those boats tend to overcharge tourists, a cheaper option is the public ferry.