How much does it cost to travel to Georgia?

How much money will you need for your trip to Georgia? You should plan to spend around GEL70 ($26) per day on your vacation in Georgia, which is the average daily price based on the expenses of other visitors. Past travelers have spent, on average, GEL19 ($6.94) on meals for one day and GEL12 ($4.59) on local transportation. Also, the average hotel price in Georgia for a couple is GEL51 ($19). So, a trip to Georgia for two people for one week costs on average GEL978 ($362). All of these average travel prices have been collected from other travelers to help you plan your own travel budget.

A vacation to Georgia for one week usually costs around GEL489 for one person. So, a trip to Georgia for two people costs around GEL978 for one week. A trip for two weeks for two people costs GEL1,956 in Georgia. If you're traveling as a family of three or four people, the price person often goes down because kid's tickets are cheaper and hotel rooms can be shared. If you travel slower over a longer period of time then your daily budget will also go down. Two people traveling together for one month in Georgia can often have a lower daily budget per person than one person traveling alone for one week.


How expensive is Georgia? How much money do I need for Georgia?

How much does a trip to Georgia cost? Is Georgia expensive? The average Georgia trip cost is broken down by category here. All of these Georgia prices are calculated from the budgets of real travelers.

Looking for a hotel in Georgia? Prices vary by location, date, season, and the level of luxury. See below for options.

How much does it cost to go to Georgia? Naturally, it depends on the dates. We recommend Kayak because they can find the best deals across all airlines.

The price of renting a car in Georgia will depends on dates, the type of car, the location, and your age. We recommend Kayak because they can find the best deals across all car rental companies.

Tips and Handouts Budget in Georgia

Georgia On a Budget 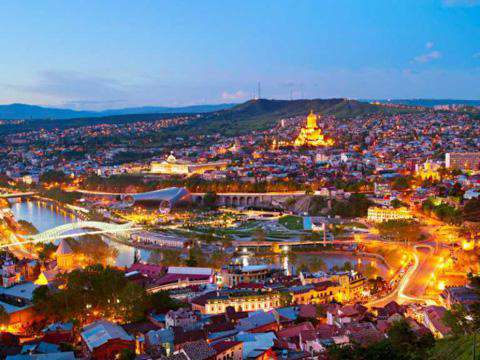 Tbilisi, Georgia
The title of the most colorful country of the South Caucasus definitely goes to Georgia. The unimaginable beauty of nature is spiced up with the hottest temperament of Georgians, wine aroma, tastiest dishes and, of course, heartwarming beats of national music. Georgia can be a great choice of adventure tourism, ecotourism, beach holidays, wine tours, hiking in the mountains and much more.

Georgia is the country of the Caucasus standing on the crossroads of Eastern Europe and Western Asia. To the west, it bounds the Black Sea, to the north Georgia borders with Russia, to the south with Armenia and Turkey and with Azerbaijan to the southeast. Due to the diversity of climatic zones (more precisely 12 climatic zones), here you can see subtropical forests, snow peaks, and coniferous forests.

Here are some interesting facts about Georgia. People call the country Sakartvelo and it sounds really interesting. Actually, spoken Georgian is one of the unique languages with rare sounds that are rather hard to pronounce. The name of the country, Georgia is linked with St George. Crusaders, who spread Christianity on the region, were devotees of St George. Today the statue of Georgian patron saint stands on the central square of Tbilisi. If you're planning a trip here, check out this guide to things to know before you travel to Georgia.

Georgia was the second country in the world after Armenia to adopt Christianity as a state religion. The church always had authority in the country and over the centuries it was the greatest force that kept the nationality and traditions.

The highest mountain range that marks the border of Georgia and Russia is the Caucasus Mountains. According to Greek mythology, the mountains were the pillars that held the world and here Zeus tied up Prometheus.

The territory of Georgia was inhabited since prehistoric times. Archaeological excavations made the greatest discovery of the region. There was found one of the first wineries dating back to 6.000 years B.C. Today winemaking is an important branch of industry and tourism. Kakheti with the Alazani valley is the region of winemaking with the largest wine producing companies.

Tbilisi is the largest and definitely the most beautiful city in the country. Yet every city and region has its highlights. For a great overview of the country, check out this list of things to do in Georgia. Or for more ideas, read on.

What catches the eye in Georgia is its super modern and futuristic architecture and mind-blowing buildings. More and more crazy and non-standard architectural masterpieces appear in Georgian cities. Tbilisi is the city of contrasts. In one side we can see ancient churches and buildings, on the other side, there are those amazing metal monsters that have nothing to do with traditional architecture.

The resorts of the Black Sea are top popular and most visited directions in Georgia. The Autonomic Republic of Adjara with the capital of Batumi is a modern European resort with the most amazing architecture, clean beaches, and fun entertainment. Annually it is visited by thousands of tourists from neighboring countries.

The Kazbegi region should also be visited. Home to wineries, beautiful landscapes, and authentic villages. The Georgia Military Road is also a must-do, as it traverses the landscape through the region. For more ideas, see this guide to the Kazbegi region in Georgia

As an ancient religious country, important attractions are medieval churches and monasteries. The religious center of Georgia is Mtskheta with its monasteries. Besides of Christian monasteries, there are important pre-Christian monuments that are part of the history of Georgia. One of the important sights to be visited is the cave town of Uplistsikhe on a hill. It is one of the oldest settlements of the Caucasus and proof of the civilization that was living here over thousands of years. The lower area and the caves are connected with the upper layer by a tunnel. There is an ancient basilica at the central part of the town that was built later.

In fact, it is virtually impossible to count all the popular attractions and each of them is unique with its history. To see all the beauty of Georgia you should devote at least a week and travel around the country.

Almost all the attractions mentioned below as well as many others can be found in classical tours to Georgia. If you are looking for reliable agencies and cannot choose among the great number of offers check the info here, may be you will like some of the company's offers - mygeotrip.com.

Georgian national cuisine is no longer just a part of the culture and the nation. It is a true value and a heritage that is appreciated not only by the natives but around the world. There are thousands of Georgian restaurants across the world and we already have the most beloved national dishes. Well, imagine, you are in a country where all the tastiest dishes are served. Is it possible to resist the temptation?

Traditional dishes are spicy with a lot of greens, vegetable, and meat. Just like other nations of the Caucasus, Georgians do love meat dishes and they definitely know how to serve them. Besides meat, they have Suluguni cheese that is used in Georgian khachapuris, as a separate dish and a snack. Must-try dishes in Georgia are khinkali, khachapuri, barbecue, satsivi and, of course, traditional dessert churchkhela. Take your time to taste true Georgian wine and enjoy the most amazing sunsets.