Discover Iran with these Day Trips from Kashan

Middle East / Iran /
Kashan is one of the most traditional cities you'll visit in Iran and there are enough things to do in Kashan to spend several days. As with everywhere in Iran, you should give yourself the time to connect with the locals instead of rushing through to tick off your bucket list.

Kashan has a large number of historical houses and mesmerizing mosques. And the bazaar is most likely one of the most beautiful in Iran. It has been an important center of trade for more than 800 years as the city is strategically placed along the old desert trade route. Even today the old caravanserai in the bazaar is where you can buy old luxury carpets.

Natural rose water is one thing Kashan is famous for today, so this is definitely the place to buy it on your Iran trip.

Though you could spend several days in Kashan discovering all the beauty the city has to offer, there are a lot of fun day trips from Kashan you should fit into your Iran itinerary. Get ready to explore the desert, a Salt Lake, the largest underground city in the world, and much more! 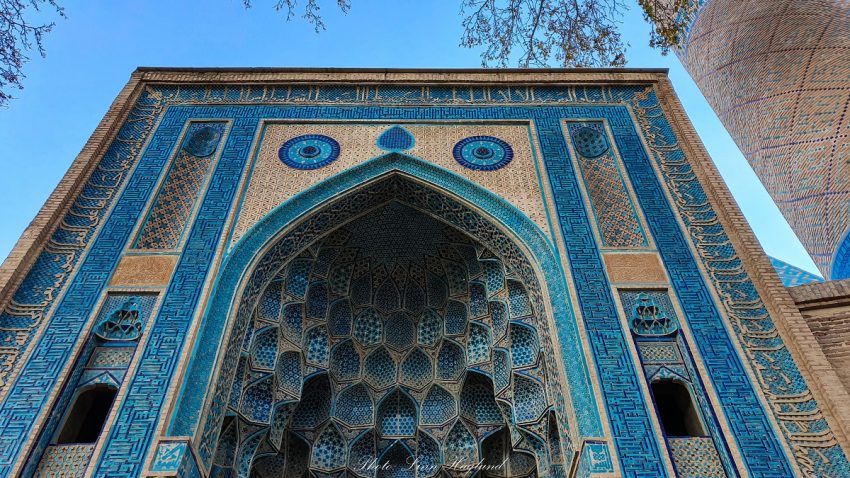 Where to stay in Kashan

There are many great places to stay in Kashan, many of them are historic houses turned into guest houses. Not only are they stunningly beautiful, but the people that run them will become your close friends.

Here are a couple of places I can recommend either because I've stayed here myself or I have met other travelers that have talked warmly about the place.

Kooshk E Honar is situated in a beautiful building inside the city walls, and was rebuilt in 2019 and opened up for tourists towards the end of the year. It is a budget friendly hostel with both private rooms and dorms. The owner, Hamid Reza, speaks English and will help you with anything you need, whether it's booking day trips from Kashan or your transport to other destinations.

Kooshk E Honar is also strategically situated only a few minutes' walk from the historical houses and the bazaar. I stayed at this hostel and recommend it warmly!

Hostel Green House was recommended to me by travelers I met on a day trip from Kashan. They talked warmly about the owner, Ali, that, with fluent English, gave them recommendations and tips about where to go in the city and which Kashan day trips were the best. This historic house also has private rooms and dorms to choose from and has a shared kitchen.

How to go on Kashan day trips

The easiest way to go on day trips from Kashan, is to go with a private driver or an organized tour. This way you also support the locals economically, which is much needed in Iran.

However, you can rent a car and go on these Kashan day trips on your own. Note that going to the desert requires a 4WD and it can be easy to get lost unless you know where you are going. A local guide will get you to the nice spots straight away.

Now, let's look at the best day trips from Kashan for your itinerary.

A day trip to the red village, Abyaneh, is a must when you are in Kashan. This 2500-year-old village is truly unique. They have kept their original customs from before Islamic times and they even speak the same language as they did back then. You will also notice that the villagers wear traditional clothes that you won't see anywhere else in Iran. The women wear beautiful dresses and white headscarves decorated with colorful flowers.

The red color of the village comes of the clay used to build the houses that has huge amounts of iron oxides.

Points of interest are among others, the Harpak Fire Temple, the Great Mosque, Bibi Zobeideh mausoleum, as well as other smaller shrines and mausoleums.

While there are a few places worth seeing in the village, make sure you also walk to the ruins of the Palahamoona Fortress on the other side of the valley. The fort itself is not much to see as there are only a couple of walls left, but there are a few ruins and cave houses on the way up.

The top of the fort is where the classical views of Abyaneh are. The old, red village that looks like a painting against the mountain it sits on. 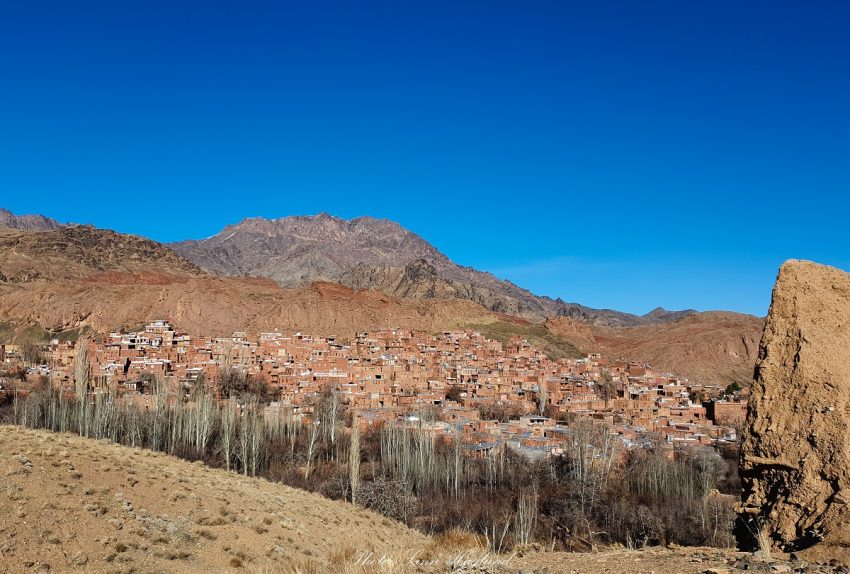 Maranjab desert and the Salt Lake

A day trip to the Maranjab desert and the Salt Lake is a must! A full day tour can take you to an old caravanserai too. It was built in the 17th century to serve as accommodation for travelers along the old desert trade road that went through Kashan. Even today, it's possible to stay overnight, though the accommodation is simple.

The Salt Lake is a great sight in the middle of the desert with the reflections of the sunlight. As any Salt Lake, it's a fun place to take creative photos as the sun sits low on the sky and creates beautiful silhouettes.

However, the greatest thing of all is the sunset in the desert! The magic that comes with the silence of this huge space of golden sand dunes as far as your eye can see. The gold meeting dark shadows and the colors in the horizon where the sun sets silently behind the far away dunes.

The most photographed hour on a desert tour for sure. But don't forget to be present and soak in that moment too. 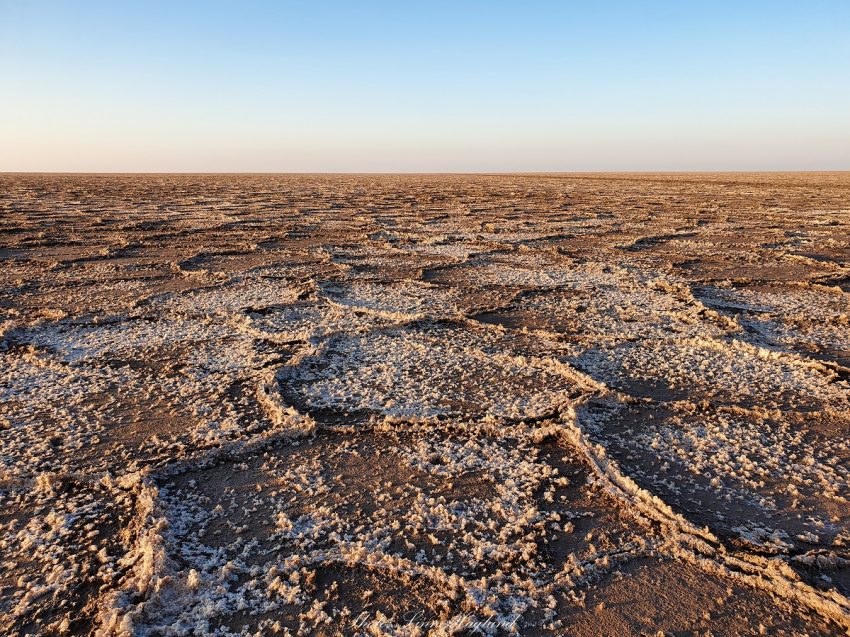 Another great day trip from Kashan is the ancient Noushabad underground city combined with the Fin Garden.

Noushabad underground city is said to be the world's largest underground city. It is built on 3 different levels to protect the inhabitants towards attacks on the city. They built the tunnels so that the enemy easily would be trapped if they found any of the entrances.

It is fascinating to see how they secured fresh air channels through the architecture of the tunnels. There is also a huge water basin once you enter the place. Guides speak English.

Just a few hundred meters from the underground city you find the ruins of Noushabad Castle which was built with the soil they dug out while building the tunnels. Now, there are only the mud walls and some of the watch towers that remain. It is possible to climb some of the towers for city views unless it has been raining, then the mud is probably too slippery. 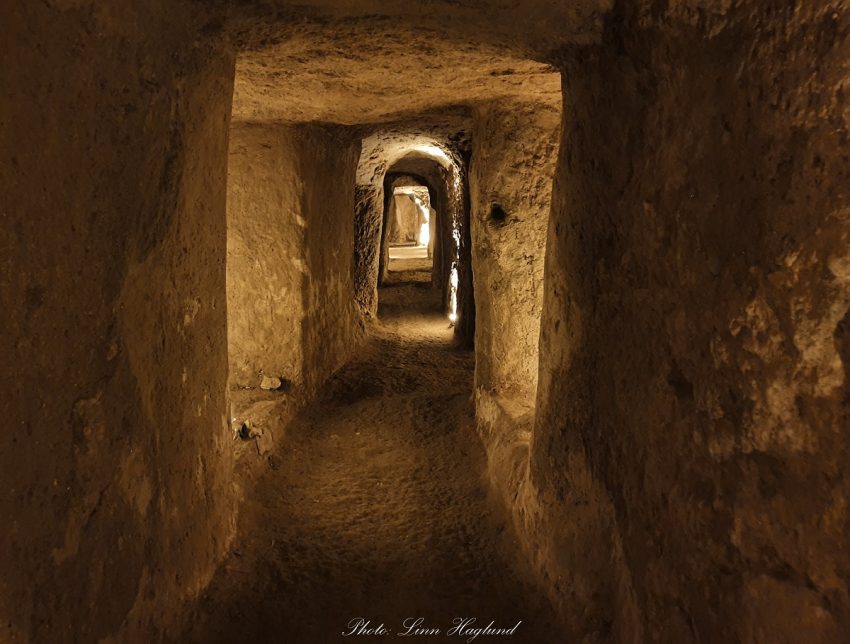 Fin Garden is Iran's oldest surviving garden, dating back to the 16th century. Now, the UNESCO World Heritage site is one of the most popular day trips from Kashan for local and foreign tourists alike.

The buildings surrounding this oasis, are all beautifully decorated with astounding paintings and mosaics. The garden itself, is crisscrossed with turquoise water fountains following the foot paths between lush green trees. 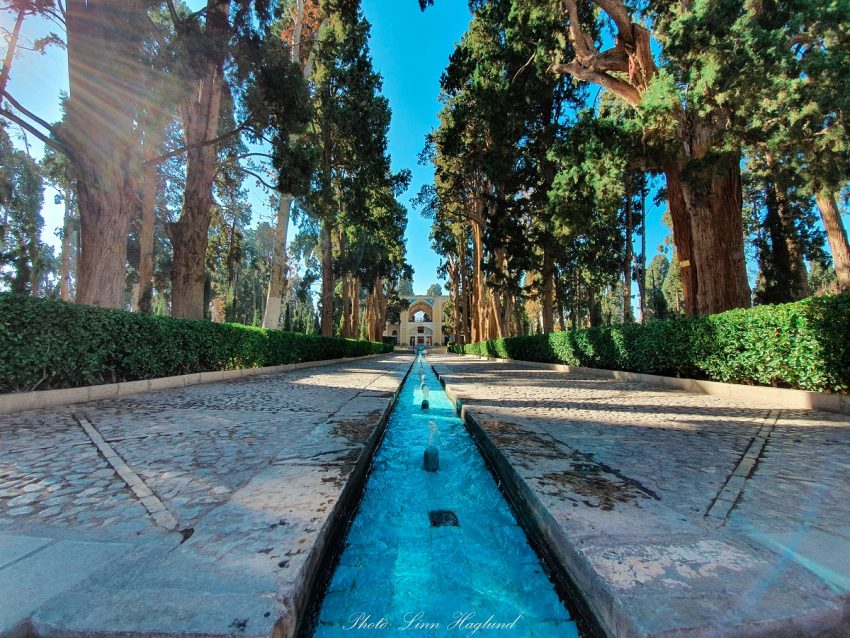 Natanz is a town full of historical sites, most of them dating back to the 13th and 14th centuries and is a popular day trip from Kashan. The most famous attraction is the early 14th century Jameh Mosque of Natanz. This is one of the best-preserved structures from the Ilkhanid-era and one of the oldest mosques in Iran. Just behind it you find a fire temple from the Sassanid era.

The town houses several shrines and a bath house worth visiting.

On the outskirts of Natanz, you find a neighborhood called Afooshteh which is worth visiting. In Afooshteh you find a bath house, several shrines, and a mosque. The Mir Mosque is beautifully decorated with verses of the Quran engraved. There is also the house of Soorgah and a water reservoir.

There are plenty of places to eat traditional Iranian food in Natanz. Don't forget to take time to walk the streets and enjoy the beautiful town with the breathtaking backdrop of the Karkas mountain range. 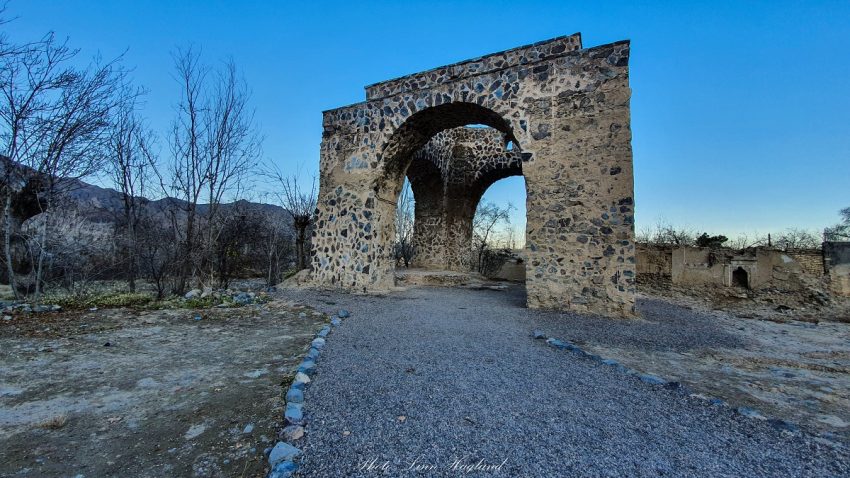 Kashan is one of the most traditional cities in Iran, and it makes it a great base for exploring the surroundings. The city is also only a few hours from both Tehran and Isfahan which makes it a natural stop on the way. As a part of the ancient trade route, there is no doubt there are a lot of incredible day trips from Kashan. This area of Iran does have a lot of history and culture to it and there is no way you will run out of things to do. I hope you got inspired to stay a few more nights in Kashan to explore these wonderful day trips!

Linn Haglund grew up in Norway but spent most of her adult life traveling and living abroad. This made her well aware of the negative impact tourism can have on a destination. As a result, she started the travel blog Brainy Backpackers to help others explore this wonderful planet in a responsible way. You can follow her journey on Instagram.