How much does it cost to travel to Nairobi?

How much money will you need for your trip to Nairobi? You should plan to spend around KES6,426 ($53) per day on your vacation in Nairobi, which is the average daily price based on the expenses of other visitors. Past travelers have spent, on average, KES777 ($6.35) on meals for one day and KES1,107 ($9.05) on local transportation. Also, the average hotel price in Nairobi for a couple is KES2,399 ($20). So, a trip to Nairobi for two people for one week costs on average KES89,964 ($736). All of these average travel prices have been collected from other travelers to help you plan your own travel budget.

A vacation to Nairobi for one week usually costs around KES44,982 for one person. So, a trip to Nairobi for two people costs around KES89,964 for one week. A trip for two weeks for two people costs KES179,927 in Nairobi. If you're traveling as a family of three or four people, the price person often goes down because kid's tickets are cheaper and hotel rooms can be shared. If you travel slower over a longer period of time then your daily budget will also go down. Two people traveling together for one month in Nairobi can often have a lower daily budget per person than one person traveling alone for one week.


How expensive is Nairobi? How much money do I need for Nairobi?

How much does a trip to Nairobi cost? Is Nairobi expensive? The average Nairobi trip cost is broken down by category here. All of these Nairobi prices are calculated from the budgets of real travelers.

Looking for a hotel in Nairobi? Prices vary by location, date, season, and the level of luxury. See below for options.

How much does it cost to go to Nairobi? Naturally, it depends on the dates. We recommend Kayak because they can find the best deals across all airlines.

The price of renting a car in Nairobi will depends on dates, the type of car, the location, and your age. We recommend Kayak because they can find the best deals across all car rental companies.

What did other people spend on Transportation in Nairobi?

Typical prices for Transportation in Nairobi are listed below. These actual costs are from real travelers and can give you an idea of the prices in Nairobi, but your costs will vary based on your travel style.

What did other people spend on Food in Nairobi?

Typical prices for Food in Nairobi are listed below. These actual costs are from real travelers and can give you an idea of the prices in Nairobi, but your costs will vary based on your travel style.

What did other people spend on Entertainment in Nairobi?

Typical prices for Entertainment in Nairobi are listed below. These actual costs are from real travelers and can give you an idea of the prices in Nairobi, but your costs will vary based on your travel style.

Nairobi On a Budget 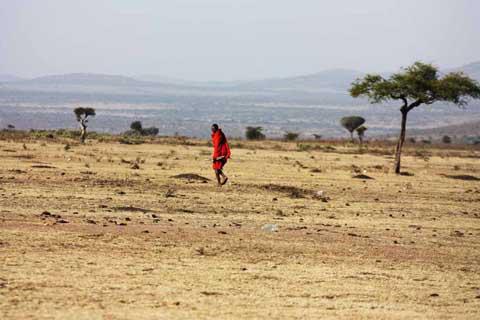 A Masai Warrior near Masai Mara National Park
Nairobi is Kenya's capital as well as the country's largest city. With a population of about 3 million, it is also one of the largest cities in Africa. It is a prominent city both politically and financially within the region. There are many international companies that are located in Nairobi and the Nairobi Securities and Exchange is one of the largest in Africa.

Kenya has a subtropical highland climate. It's located 1,795 meters about sea level so evening temperatures can be cool. During the months of June and July, the temperature can drop to 50 degrees Fahrenheit. December through march are the warmest times of the year with average highs around 75 degrees Fahrenheit. The city has two rainy seasons with moderate rainfall.

Nairobi is a modern city with many sights and activities for visitors to enjoy. Nairobi National Park is the world's only game reserve that is located in a major city. Within it you will find zebra, wildebeest, buffalo, giraffe, lions, cheetahs, and much more. You can also visit the nearby Sheldrick Elephant Orphanage. This orphanage raises elephant calves and rhinos that come from all over Africa. The Giraffe Centre is located in Lang'ata and breeds endangered Rothschild giraffe. You can feed the giraffe and enjoy a variety of educational programs. Mamba Village has ostriches and crocodiles and is also worth a visit.

Nairobi is divided into constituencies which include Makadara, Kamukunji, Starehe, Langata, Dagoretti, Westlands, Kasarani, and Embakasi. The major administrative areas are Central, Dagoretti, Embakasi, Kasarani, Kibera, Makadara, Pumwani, and Westlands. The most affluent neighborhoods are usually in the west and northcentral parts of the city.

The main reason people travel to Kenya is to enjoy a safari. The most popular safari destination in Kenya is Masai Mara and most safaris will take you to this park as well as one or two other parks if time allows. While it will give you peace of mind to organize your safari before you arrive in Kenya, you should understand that you will pay a significant markup this way. If you're more flexible and free spirited, you can arrive in Nairobi and book your safari the same day. There are plenty of operators who will eagerly organize your trip for you. The packages are usually standard and range in length from three to five days, but some trips are as long as two weeks. Refer to your guidebook, which can suggest some reputable companies that can arrange your trip. Most safaris have about five to eight people and you travel in a comfortable minivan. Food and transportation are included, but tips are not.

Other activities within the city include enjoying the city's excellent nightlife, ice skating at Panari, going to a Maasai market or visiting Go-Down Arts Center.

Nairobi has a large number of budget and mid range restaurants that you can choose from. There are plenty of bars, coffee shops, and cafes around town. There are also restaurants that serve Ethiopian, Chinese, Indian, and Italian food, as well as many other international cuisines. If you're looking for cheap international food head to the Village Market Food Court. Fast food restaurants in the city include Steers, Debonairs, Wimpy, and Galito's.

You're likely to visit Nairobi at both the beginning and end of your trip to Kenya, as the city serves as the country's gateway. The airport is nice, and you can pick up a taxi on arrival to take you to your hotel. Do negotiate the price, and you will likely get a better deal if you do not use one of the taxi companies that is located inside the airport, but instead find a taxi just outside.

Within Nairobi, you can use buses to get around. These buses, referred to as matatus, can vary in size and are often overcrowded. Taxis are a cheap alternative and are generally your safest option. Particularly late at night, it is best to take a taxi to your destination. If you're going to an unfamiliar neighborhood it is better not to walk.