How much does it cost to travel to Budva?

How much money will you need for your trip to Budva? You should plan to spend around €74 ($80) per day on your vacation in Budva, which is the average daily price based on the expenses of other visitors. Past travelers have spent, on average, €25 ($28) on meals for one day and €16 ($17) on local transportation. Also, the average hotel price in Budva for a couple is €59 ($64). So, a trip to Budva for two people for one week costs on average €1,030 ($1,120). All of these average travel prices have been collected from other travelers to help you plan your own travel budget.

A vacation to Budva for one week usually costs around €515 for one person. So, a trip to Budva for two people costs around €1,030 for one week. A trip for two weeks for two people costs €2,060 in Budva. If you're traveling as a family of three or four people, the price person often goes down because kid's tickets are cheaper and hotel rooms can be shared. If you travel slower over a longer period of time then your daily budget will also go down. Two people traveling together for one month in Budva can often have a lower daily budget per person than one person traveling alone for one week.


How expensive is Budva? How much money do I need for Budva?

How much does a trip to Budva cost? Is Budva expensive? The average Budva trip cost is broken down by category here. All of these Budva prices are calculated from the budgets of real travelers.

Looking for a hotel in Budva? Prices vary by location, date, season, and the level of luxury. See below for options.

How much does it cost to go to Budva? Naturally, it depends on the dates. We recommend Kayak because they can find the best deals across all airlines.

The price of renting a car in Budva will depends on dates, the type of car, the location, and your age. We recommend Kayak because they can find the best deals across all car rental companies.

What did other people spend on Transportation in Budva?

Typical prices for Transportation in Budva are listed below. These actual costs are from real travelers and can give you an idea of the prices in Budva, but your costs will vary based on your travel style.

Budva On a Budget 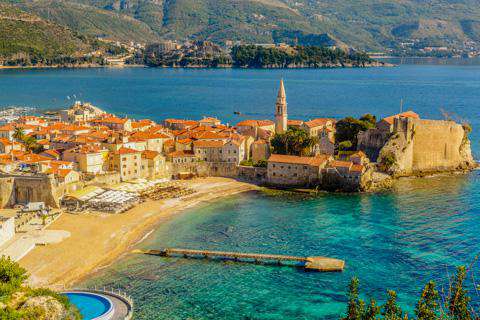 Budva, Montenegro
A coastal resort in Montenegro, Budva is probably the country's most popular tourist destination. Not only does it host a number of great beaches, but it is also home to a picturesque old town center located on a small peninsula. Some of its best features include narrow winding lanes, historic buildings, churches, and small squares.

Mostly known as a vacation resort, Budva's Mediterranean climate draws visitors to its beaches. There are many, mostly rocky beaches with some sand, but the most visited are Slovenska Plaza and Mogren Beach. Slovenska is the largest and most popular beach, often compared to Miami. It is soft and sandy, has a sidewalk nearby with cafes, bars, restaurants, and vendors selling cold drinks and snacks-but it does get very crowded, so arrive early to pick your spot for the day. Mogren is one of the more beautiful, natural beaches, which can be reached by a pedestrian boardwalk from old town. It has two beaches connected by a small tunnel, and surrounded by tall cliffs and greenery.

The town itself also has a few sights worth seeing. One of the most popular is a medieval fortress ruin known as the Citadel. From the Citadel's terrace are some of the best views of Budva. Other nearby points of interest include the historic Holy Trinity Church, Church of Saint Ivan, and the Church of Saint John, all of which have some combination of unique medieval architecture, icons, and artwork. For more history, visitors can also see archaeological findings at the Museum of the Town of Budva.

Budva is located on the central part of the Montenegrin coast, known as the Budva Riviera. It developed around the peninsula where the old town is situated, also known as Stari Grad. This part of town actually began as a sandbar island and was eventually turned into a peninsula over the years. Surrounded by ancient Venetian walls, the old town was once a medieval fortification. There are five entrance gates, with the town behind the walls full of narrow streets, terracotta roofs, cobblestone paths, churches, monasteries, and opportunities for shopping and dining. Besides the old town, the main center of activity is the promenade along the coast where there are many bars and nightclubs as well as access to the water.

Many visitors come to relax by day on one of Budva's Mediterranean beaches, and party by night at the many bars and nightclubs. There is also something to be said for exploring Budva's charming old town and learning a little bit about its ancient and medieval history. Once you have experienced the culture of old town, diving and water sports such as kayaking, scuba, waterskiing, jet skiing are popular activities along the coast. For a unique day on the water head to Ulcinj (65 kilometers south of Budva), where one dive will take you along portions of a sunken ancient Roman city and shipwrecks from the 1700s.

Because of its proximity to the sea, Montenegro has plenty of fresh fish and seafood dishes with fresh catches like prawns, mussels, clams, shrimp, and octopus. These dishes are typically garnished with polenta, blitva (a kind of spinach), or broiled potatoes. Drying fish is also traditionally practiced along the coast. Another specialty of Montenegrin cuisine is a variety of soups: 'supa' for clear soup, '?orba' for a thick soup or stew, and 'kaÅ¡a' for a porridge-style dish. For dessert, there is an assortment of local sweets, including pala?inke (a large pancake filled with jam, chocolate or cream), baklava with raisins and walnuts, krofne (doughnut filled with jam or chocolate), and a cream layered cake called krempita. Most sweets are served with coffee. Budva has a wide variety of places to eat from seafood and national cuisine like the dishes mentioned above to western food like pizza, barbeque, and other fast food. Dining options can be found just about anywhere, especially in the downtown, old town, and Slovenska Plaza.

By plane, Podgorica Airport is Montenegro’s main international airport, located about 65 kilometers from Budva, serving as a hub for Montenegro Airlines. Tivat Airport is closer to Budva, about 20 kilometers away from town. It has regular flights to Belgrade and Moscow throughout the year, and charter flights to major European destinations during the summer. Another possible flight option is Dubrovnik Airport in Croatia, about 80 kilometers away from Budva. It is served by many major airlines, making it a good option for tourists coming by plane.

By bus, Budva is well-connected to other Montenegrin cities as well as major cities in neighboring countries. Budva can also be reached by car using the coastal road.