How much does it cost to travel to Serbia?

How much money will you need for your trip to Serbia? You should plan to spend around RSD3,425 ($31) per day on your vacation in Serbia, which is the average daily price based on the expenses of other visitors. Past travelers have spent, on average, RSD807 ($7.26) on meals for one day and RSD487 ($4.38) on local transportation. Also, the average hotel price in Serbia for a couple is RSD4,306 ($39). So, a trip to Serbia for two people for one week costs on average RSD47,952 ($431). All of these average travel prices have been collected from other travelers to help you plan your own travel budget.

A vacation to Serbia for one week usually costs around RSD23,976 for one person. So, a trip to Serbia for two people costs around RSD47,952 for one week. A trip for two weeks for two people costs RSD95,905 in Serbia. If you're traveling as a family of three or four people, the price person often goes down because kid's tickets are cheaper and hotel rooms can be shared. If you travel slower over a longer period of time then your daily budget will also go down. Two people traveling together for one month in Serbia can often have a lower daily budget per person than one person traveling alone for one week.


How expensive is Serbia? How much money do I need for Serbia?

How much does a trip to Serbia cost? Is Serbia expensive? The average Serbia trip cost is broken down by category here. All of these Serbia prices are calculated from the budgets of real travelers.

How much do vacation rentals cost in Serbia? Prices vary by location, date, size of the place, and the level of luxury. See below for options.

How much does it cost to go to Serbia? Naturally, it depends on the dates. We recommend Kayak because they can find the best deals across all airlines.

The price of renting a car in Serbia will depends on dates, the type of car, the location, and your age. We recommend Kayak because they can find the best deals across all car rental companies.

Tips and Handouts Budget in Serbia

Serbia On a Budget 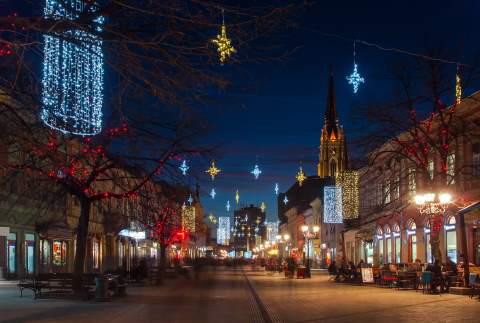 Novi Sad, Serbia, at night
Serbia is a fascinating country in the Balkan region. It is one of six republics that came from the former Yugoslavia. While you can visit Serbia most times of the year, the summer months offer the best weather and more activities and festivals. Most travelers head to the capital city of Belgrade, but you don't have to venture too far away to see some of the country's wonderful national parks and small towns.

Serbia has been slower to gain popularity among travelers than some of its nearby neighbors, but that isn't for a lack of cultural and historical sites. In Serbia you can still catch a glimpse of traditional life at a crosswords of cultures and ethnicity without the abundance of crowds you might find in other nearby countries.

Belgrade is the city to visit if you're hoping to do some shopping. The downtown area is filled with high end shops selling anything from cloths to designer goods. Once you're outside of the capital city you'll find that most things are much cheaper in price.

Food in Serbia is quite reasonably priced, in part because there are local "fast food" options everywhere. Burek, or pastry filled with meats or cheeses, is probably the most budget friendly option. You'll also find countless fast food grills that offer everything from Serbian style burgers to meat snacks. Almost all food has some form of meat or cheese in it, so as a vegetarian you will likely struggle to find food.

Transportation in Serbia is relatively straight forward. If you're hoping to save money you should opt for the bus instead of the train. Buses are generally cheaper and they are more abundant here. You are likely to at least a couple of bus trips during your stay in Serbia.

Although Serbia hasn't yet become a hotspot in Europe, it has much to offer the travelers who take the time to experience this fascinating country. Allow yourself plenty of time and make sure you venture outside the Belgrade and you're likely to catch a rare glimpse at a European country not yet influenced by the tourism industry.

Skadarlija: This neighborhood is made up of an old, vintage street which is the main Bohemian area in the country of Serbia. Located in Belgrade, it is lined with interesting shops and restaurants and has an interesting ambiance worth experiencing.
Kalemegdan Fortress: This is a fort in Belgrade that has been built and rebuilt over 2000 years by the Celts, Romans, Byzantins, Serbs, Austrians and Turks. It has both the fortress and a park area and sits in near the point where the River Sava and Danube River meet.
Novi Sad: Novi Sad is an enjoyable city worth exploring with its main site being Petrovaradin Fortress. It's the second largest city in the country, and probably the second most popular city amongst travelers.

Cevapi: This is a popular Serbian dish made with mixed, minced, and grilled meat and served in the typical kabob style. It's often accompanied by rice and a flatbread. The meal is often considered to by the national dish of Serbia, but you will find comparable dishes in other nearby countries.
Gibanica: This is a phillo pastry pie filled with spinach and cheese. It's often made with white cheese which is layered between the pastry dough. There are comparable dishes in neighboring countries as well as some countries in the Middle East. It's most often served in the home as a snack option between meals.
Prebranac: This is one of the country's few vegetarian dishes. It's made from a mixture of beans and vegetables and served in a casserole style dish. It's comparable to baked beans, but instead made with lima beans which are cooked with onions and Hungarian paprika.

Venture Outside of Belgrade

By Laurie
While Belgrade is a fascinating city well worth some time, don't limit your visit to Serbia to just the capital city. There are so many other sites in this country. Head to some national parks, smaller towns, and lively cultural events. You'll have a much more complete experience and understand this culturally diverse country on a whole new level if you see more than simply Belgrade.