Jump to:
Vienna is the capital and largest city in Austria. It's also at the cultural, economic, and political heart of the country and it's a beautiful and fascinating place to visit. The historical city center has been listed as a UNESCO World Heritage Site and there is no shortage of things to see and do in the area.

There are a variety of guesthouses and hostels in Vienna that appeal to all types of travelers. If you're looking for an affordable, quiet, and safe place to stay, the hostels below are good options.

How much do hostels in Vienna cost?

A good option for couples, students, and small groups of friends.

Private Room: $40.31
Overall Rating: 98%
Chwallagasse 2 , Vienna Austria
K&T Boardinghouse 2 is really more of a guesthouse than a hostel. There are private rooms available for an affordable price, but if you're traveling alone it can be a bit difficult to meet other guests. Still, if you'll looking for an affordable and centrally located place to stay, this is a good option. It's very close to Vienna's main shopping street of Mariahilfer Strasse and it's in a vibrant and fun part of the city. There are several good transportation connections nearby and the guesthouse is just a ten minute walk from the Westbahnhof, or the Western Railway Station. It's also about a ten minute walk to the city center.

In the surrounding neighborhood there are many things for guests to enjoy. There are some great coffee houses, bars, restaurants, and bakeries. The Naschmarket is also nearby where you can buy fresh fruits and vegetables or enjoy cheap but delicious meals.

Although this is more of a guesthouse than a hostel, there is a shared refrigerator that guests can use to store their food. If you want a quiet and secure place to stay that won't break the bank, then K&T Boardinghouse 2 is a good option.

A good hostel for students, couples, and groups of friends.

Dorm Bed: $16.12
Private Room: $17.08
Overall Rating: 85%
Rembrandtstrasse 21 , Vienna Austria
Meininger Vienna Downtown Franz is located in Leopoldstadt, which is Vienna's second district between the Danube Canal and the Danube. The hostel is in the former Jewish Quarter and it's a nice area to spend time because there is a lot to see and do. There's also lots of green space nearby as well as the Karmeliter Market. This is a great area to explore with a lot of character and a local vibe. The hostel is also close to public transportation, which makes much of the city easily accessible.

This hostel is relatively quiet and it has the feel of a hotel. It's in a basic building and there are 131 rooms in total that are all modern and comfortable. Every room has air conditioning, a bathroom, and a flat screen television. Guests can choose from single, double, and three, four, of six bed private rooms. Dorms sleep four or six people and there are both co-ed and female only rooms available.

The hostel has a lobby area, a game room, and a guest kitchen where you can prepare meals. There's also a washing machine and a computer station. Wi-fi is available in the public spaces.


A good hostel for students, backpackers, and small groups of friends.

Dorm Bed: $34.82
Overall Rating: 84%
Schönbrunner Allee 5 , Vienna Austria
Prime Rooms is another fun hostel that offers a friendly and social atmosphere but is still quiet enough to enjoy a good nights sleep. It's a small hostel, with just ten beds available, and it's located in a beautiful Viennese home. It's a great place to stay that will quickly become your home away from home.

The hostel offers a nice homemade breakfast that is available every morning for an additional charge. There are also several food markets nearby where you can grab your own ingredients and prepare a meal in the hostel's shared kitchen. If you want to take it a step further, there are even Austrian and Mediterranean cooking lessons available. On occasion, the hostel will host barbecues outside in the garden area. This is a great time to meet other guests. There are also walking tours and pub crawls available through the hostel.

On-site you can enjoy wi-fi, luggage storage, security lockers, a nice garden area, several video games, table tennis, and a dvd collection. If you're looking for a fun but relaxing place to stay then this is a good option.

For more accommodation prices and options, check out our guide covering Vienna hotel prices for your next trip. 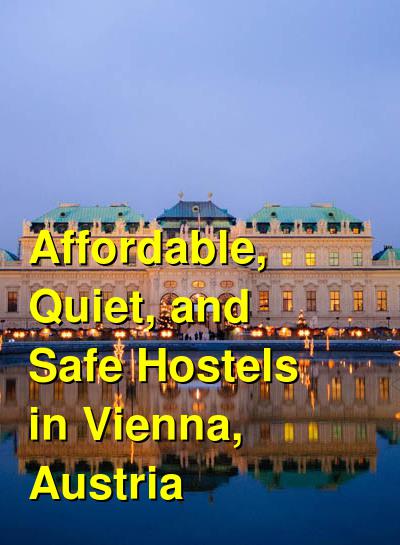