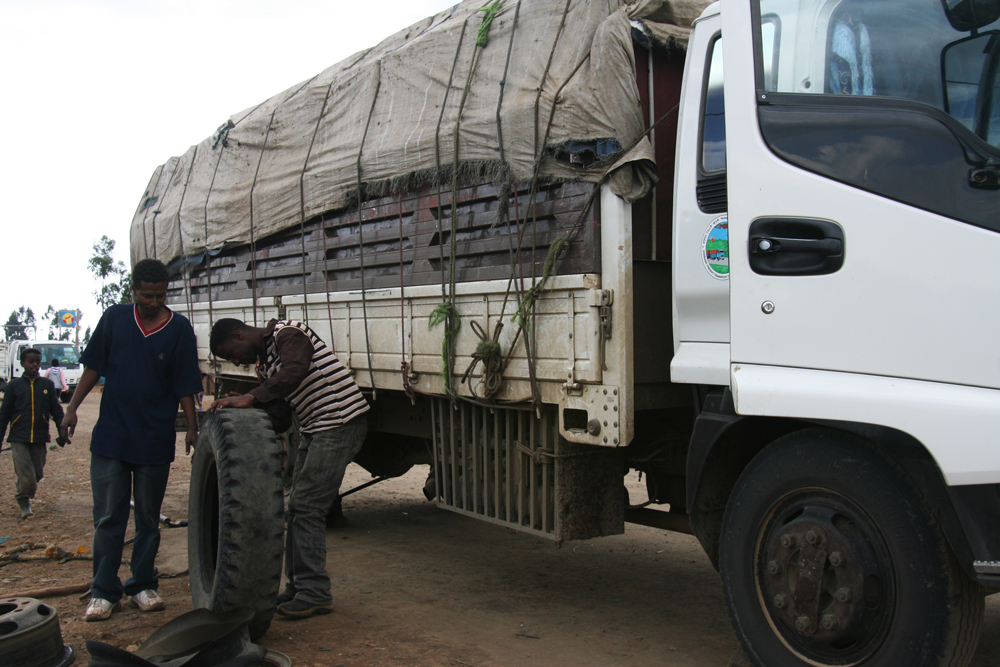 When taxi cabs and public buses fail you, try the beer truck instead. We found ourselves stuck in a small town, a mere intersection really, between Lalibela and Dessie, in the African country of Ethiopia. It was in fact a holiday, and buses were scarce. We had managed to get a very early morning ride with about 30 other people in a small minivan to this “town” in hopes of catching onward transportation. Alongside the twenty residents of this community we waited for hours for a bus to pass by. “It will come.” The people confirmed. “Every day it comes.” But as the hours passed by we began to lose hope. It appeared we were out of luck.

We ate breakfast and then lunch at the nearby restaurant, and had tea at some nice woman’s house on the corner with a few other stranded travelers heading in the other direction.

In desperation we turned to our only other option. We put on our nicest smiles and hit up a few men driving a delivery truck. Fortunately, they were also headed to Dessie. We negotiated a fair price and crammed ourselves in the front between the two men. Our bags were flung on top and tied down.

We drove a few hundred meters down the road, and then we stopped. The men got out and walked over to a small wooden shack on the side of the road surrounded by metal junk. A man and a boy came out and talked for a few minutes with the men from our truck. Then the man and the boy spent the next two hours removing all of the wheels from our truck.

Eventually we got new wheels and new tires placed on our truck. And then we were off. From the front of that truck we saw the green forested mountains of Ethiopia pass alongside. We drove through small villages, around hairpin mountain turns, and across beautiful farmland.

As we rolled through the small towns we were greeted with cheers. I asked the driver what was in the back of the truck. His English was limited, but he said, “beer” with a big smile on his face. This was in fact a beer truck, and who doesn’t cheer for the beer truck. Every single person waved in excitement as we drove by.

Later, we stopped for dinner at a small restaurant. The driver knew the owner. We were served delicious injera and tibbs. The owner personally greeted us and asked how we enjoyed the meal. It was some of the best food we ate in the country, but unfortunately we had no idea where we were.

See Also  Delicious foods you should not miss in the Philippines

We chatted with the driver and slowly made our way towards Dessie. We jammed to Michael Jackson and eighties rock. The sun dipped below the mountains and it grew dark. It was late in the evening before we arrived out our destination, but we had heard many stories and learned many things from our new friends.

Hitching a ride is often more than just a last resort. It can often times be your best option.

Laurie is happiest on the road and has visited over 50 countries. She dreams about meeting tribal people, hiking through rice paddies, and driving longtail boats through crystal-clear waters. She enjoys photography, social activism, and helping others quit their jobs to travel. Laurie co-founded Budget Your Trip, and lives the life any nomadic soul would yearn for.