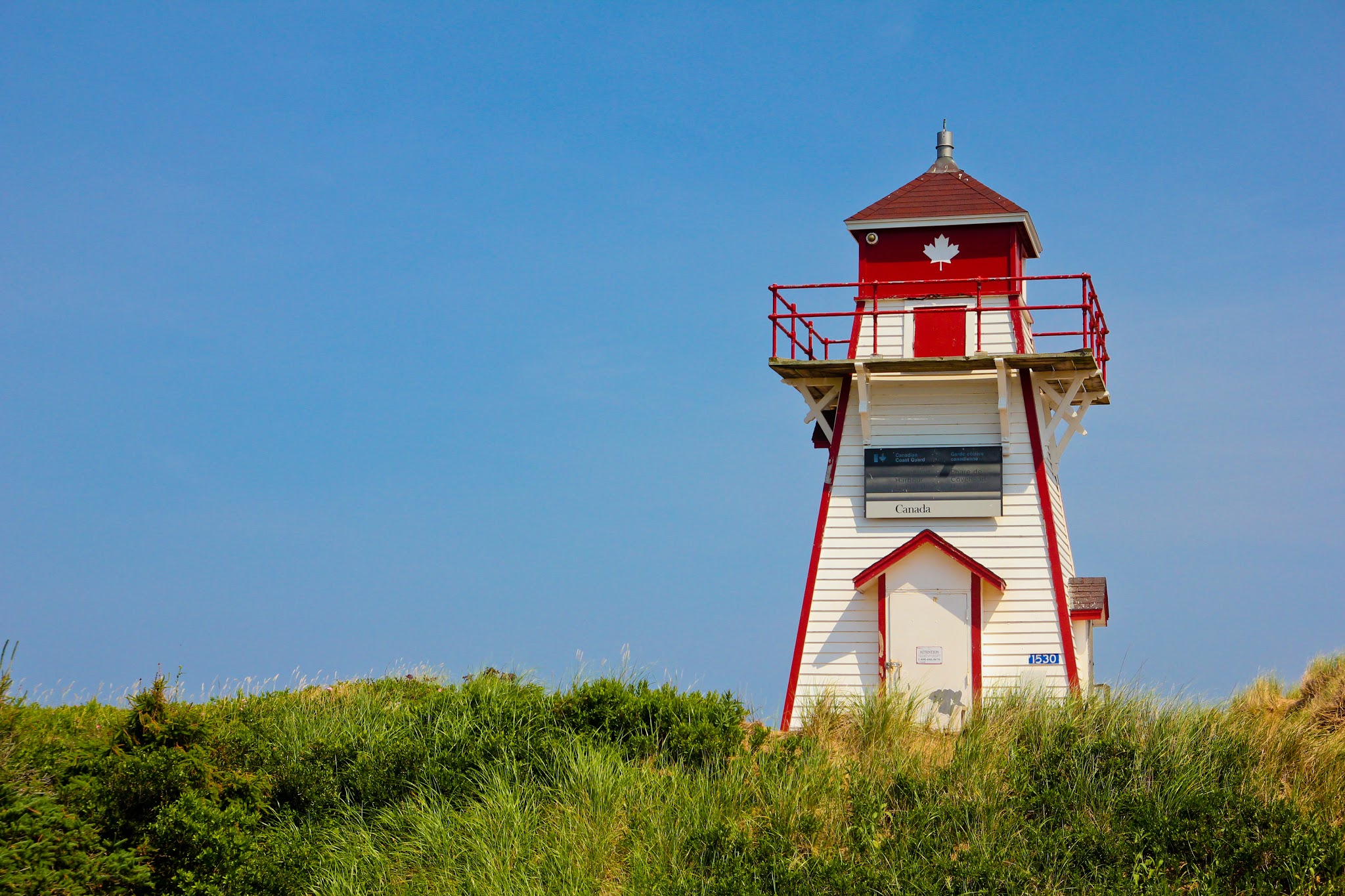 Summer vacation, at least for our family, is synonymous with road trips. We, Bryan and Laurie, the founders of Budget Your Trip, decided it was time to step away for a couple of weeks and take the newest member of the family (our four-month-old daughter) on a driving adventure from Boston to Nova Scotia. Yes, it’s quite a long drive. And yes, everyone says it’s a challenge to travel with a baby. But we went anyway, because traveling is in our blood, and also because we’re a little crazy. To add to the reasons, believe it or not, this was our first time in Canada. We’ve trekked through the Sahara and the Gobi, swam in the Mekong and the Nile, but we have never visited our friendly neighbors to the North. Well, it was time to fix that!

We flew into Boston mainly because it was less expensive than anywhere further north, and rented a car for the road trip. Mind you, renting a car that could handle all of the stuff we had brought with us was a bit of a challenge. We were traveling with our baby (did we mention that already?), and all of the stuff that comes with a baby, like a stroller, car seat, diapers, bottles, an armored tank, portable crib, etc. So, we opted for a hatchback, which turned out to be a great decision. If you need a rental car, I suggest you check out this site to find the best deal across all of the companies for your destination.

And yes, you can drive a rental car from the U.S. into Canada.

Our first stop was Portland, Maine, to visit some family. Portland is a great town with waterfront views, old buildings converted into shops and restaurants, and beautiful coastal scenery.

Our next stop was Canada! Saint John, New Brunswick made for a nice overnight stop because it kept the daily driving to a minimum and offered a neat place to explore. Since we were traveling with a baby, and being our first time doing so, we wanted to make sure that we would not spend too much time each day in the car. So, we aimed to have no more than 5 hours per day of driving.

Despite not knowing what to expect, Saint John was a great little seaside town with a unique old town atop a hill overlooking the sea. The old seaport warehouse buildings have been renovated into shops and restaurants (seafood!), and the town squares offered a great spot to relax. You can find a fantastic AirBnB here.

Charlottetown on Prince Edward Island was our next stop, conveniently located about four hours north of Saint John. After crossing the long bridge over to the island and passing through some of the most beautiful rural scenery we have feasted our eyes on in quite a while, we arrived in the city. Charlottetown was surprisingly busy and bustling considering the pastoral and rural nature of the surrounding farmland. The streets were lined with busy restaurants serving food from all over the world. The waterfront and nearby harbor were charming, but definitely not devoid of excitement. We wandered through some old churches and ate even more seafood. How could we not?

See Also  Things to Do in Chicago with Kids

Our plan for the next day was to explore the island, which the locals just call PEI. The northern coast, specifically the area of Cavendish, was the inspiration for and filming location of Anne of Green Gables. The novel and its sequels take place among the stunningly beautiful landscape of the island, and visitors can visit the Green Gables park as well as several other related museums in the area. The beach is also nice, just as good as any other east-coast beach in the U.S., but with fewer crowds and perhaps a slightly cooler climate. The dunes are covered with green grasses and the shoreline is dotted with scenic lighthouses. Inlets and coves protect small fishing villages with multi-colored boat houses where local fishermen bring in their daily catch. Only minutes away are lush fields full of wheat, corn, and other crops, arranged in a neat patchwork of colors rolling over the hills. It’s no wonder that Canadians flock here for their summer vacations.

The Victoria Lighthouse on the south side of PEINote that leaving PEI across the bridge involves a rather steep toll of about $47 (Canadian Dollars). You only have to pay when you leave. Or you could take the ferry.

Next stop: Halifax. This modern city on the bay on the eastern coast of Nova Scotia rolls down a large hill towards the waterfront in a way similar to San Francisco or Lisbon. With historical roots apparent in many of the older buildings which have been renovated into offices and restaurants, Halifax offers a lively downtown scene with shopping and attractions. The entire length of the downtown waterfront can be traversed on foot and is teeming with museums, shops, restaurants, street performers, and great views of the bay.

AirBnB’s in Halifax / Recommended Hostels and Cheap Hotels in Halifax

We used Halifax as a base to explore the coastal areas of Nova Scotia. To the south is a scenic drive passing by many small fishing villages. The most famous of these villages are perhaps Lunenburg, a UNESCO world heritage site, and Peggy’s Cove, a small town which is home to a scenic lighthouse. We made the drive along the coast stopping along the way for lunch, shopping, and sightseeing, taking photos and mixing in with the local fisherman. Many of these small towns harbor antique shops and quaint little seaside cafes. Travelers could spend a week just slowly driving from town to town, staying in AirBnB’s such as the ones you can see here, eating lobster, and soaking in the cool sea breezes. But we did it all in a day, which we regret because it went by too fast. (Expect a few hours to drive from Halifax to Lunenburg, as the roads are small and weaving, and you will definitely want to stop for the views.)

After visiting the Nova Scotia coast, we started our long and slow journey southward, back towards the U.S. We had planned our route so that we would see some of the destinations on the way up and some on the way back down to avoid long days on the road. Our next stop was the shore of the Bay of Fundy, and we spent the night in Moncton, New Brunswick (AirBnB’s here).

After some great seafood in the small but interesting downtown area of Moncton, we drove towards the coast to visit the Hopewell Rocks. The Bay of Fundy is unique because it has the largest tides in the world. Due to its long and narrow shape, during peak times of the month, the tides can differ by as much as 47 feet! The Hopewell Rocks park is an ideal spot to witness this, as the coastline is mostly cliffs with interesting arch formations spanning out from the rocky outcroppings. During low tide, we walked “on the ocean floor” as they say, and weaved our way through and under the large arches. But only a few hours went by and the tide started to come in, and then it rose higher and higher. Not only did the beach disappear, but the archways themselves became submerged!

Further down the coast from Hopewell Rocks park, but before reaching Fundy National Park, is Cape Enrage, home to some small towns, high cliffs, rolling farms, and a great restaurant for lunch. We found out about the Cape House Restaurant while in Moncton and thought it might be a convenient stop for lunch. It turned out to be quite a gourmet place disguised as a casual joint, with a terrific menu and a skilled chef just down the slope from the scenic lighthouse overlooking the bay. If you’re in the area, don’t miss it.

After lunch, we visited a local winery, but we did not have time to visit Fundy National Park. Sometimes traveling with a newborn can limit the aggressiveness of your sightseeing, but it was for the best as we had seen so much in one day already.

Next stop, Maine, back in the United States. Crossing the border was quick and painless, as the border area seems to be designed for lots of traffic, but at the time, there was none.

Our last major destination was Bar Harbor and nearby Acadia National Park. Acadia is a small but scenic area on the cost of Maine, and after driving southward from Canada, crossing the border (totally painless), and making our way along the Maine coast, we arrived in time for dinner at a nice street side seafood restaurant (no surprise there). Bar Harbor is a small town on the coast with a large number of shops, restaurants, tourists, and hotels. (Find an affordable AirBnB here.) The number of tourists wandering around town was overwhelming, but then, summer is the high season. After a night with a beautiful oceanside view, we spent the next day driving through Acadia National Park. Again, the number of tourists were high, but how can we complain since we just added to that number? It was easy to see why so many people visit Acadia; it’s natural beauty is awe inspiring. Basically, the main area of Acadia is a driving loop along the rocky shore, several crystal clear lakes, and up Cadillac Mountain where, on a clear day, one can see for miles. It was on the top of that mountain that we realized just how far we had been in the last two weeks, and we were sad that our trip was ending. It was our daughter’s first of many road trips, and thankfully it was a great success.

Overall, Canada and the coast of Maine were just what we needed for a family vacation. The natural beauty combined with great food and modern conveniences allowed for us to go on our own little adventure with our new baby while taking in a lot of new experiences. And the stereotype is true, Canadians really are extremely friendly! Everyone wanted to help out and have a chat with us, despite our lack of knowledge about hockey.

Our only regrets on the trip? Perhaps we should have rented a slightly larger car (compare prices here). As new parents, we don’t always know what baby gear we need to travel with, but we’re learning. A compact hatchback was sometimes a little inconvenient, although the fuel efficiency saved us some cash. Another regret was that we didn’t get to see a lot of the area because we had a limited time to travel and needed to move slow. Cape Breton, to the north of Nova Scotia, is rumored to be a great destination, but we missed it. We’ve also wanted to visit Newfoundland, but that’s another huge island for another huge trip sometime in the future. Also, New Brunswick itself was surprising as to the amount of places to see and adventures to partake in. We could have spent a week alone just in that province, even though Nova Scotia and Prince Edward Island tend to be more famous as tourist destinations. Again, more for the next trip!