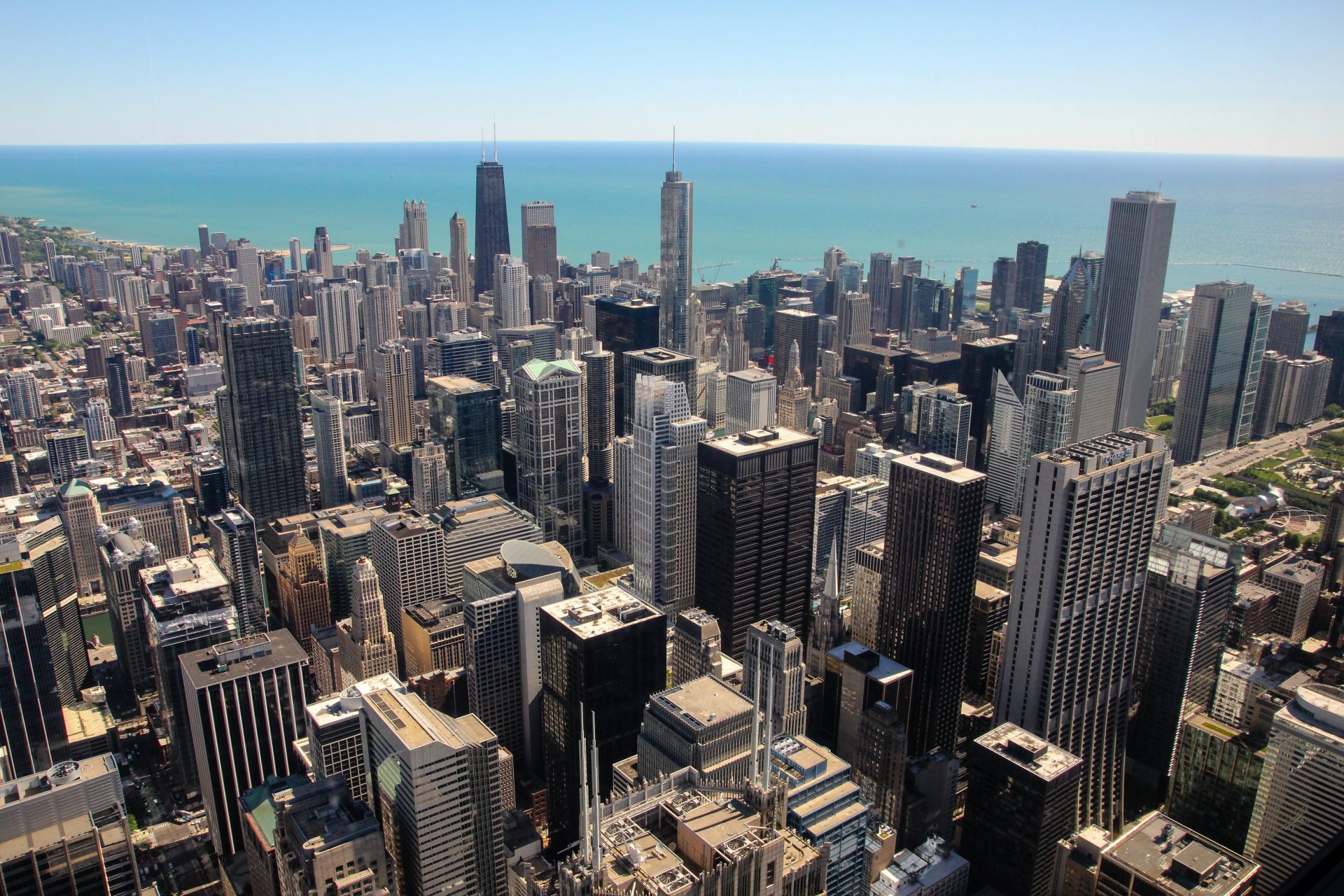 The first stop on our summer road trip was Chicago, and it didn’t disappoint. Since we were traveling with our three year old daughter, we wanted to make sure that we provided plenty of entertainment for her instead of just dragging her around to the major sights that most grown-ups would want to visit.

We arrived fairly early in the morning, so before we checked into our hotel we went over to the Navy Pier, one of the best places to go with kids in Chicago. According to various sources, including some friends, Chicago supposedly has a pretty good Children’s Museum as well as some other fun activities at the Navy Pier. Approaching the Navy Pier, it’s hard to miss the large Ferris wheel looming in the distance, and our daughter spotted it right away. But first we had to stop at the fountain in front of the Children’s Museum, which is a large courtyard with water jetting up out of the ground, inviting kids and adults alike to dodge (or not) the multiple streams of water shooting in various directions. The weather was warm and plenty of other kids were playing in the water, so we joined them. Afterwards, we went up into the huge Ferris wheel for a great view of the Chicago’s skyline and Lake Michigan. All three of us were impressed with the tall buildings, but none more than our daughter as she stood glued to the windows in the Ferris wheel car. It was a hit!

Then we explored the pier a little more, which also contains some shops and restaurants similar to a small shopping mall. After a great lunch we tackled the Children’s Museum, which we must say lived up to the hype. Personally, I think kids a little older than our three-year-old would enjoy it more as there were some activities that were more suited towards kids that were perhaps five or six, or even older. However, more than enough activities for a kid her age can be found in the museum, including a large room filled with interactive pools of water, another room that feels like a tree house, and other room that encourages kids to make forts out of blankets and furniture.

That evening for dinner we had to try a classic Chicago treat: deep dish pizza at Lou Malnati’s. Despite her age, our daughter is a pizza connoisseur and provides professional quality epicurean reviews of her favorite pizza restaurants to anyone who will listen. So we were all curious to see how she would react to a thicker crust pizza with the tomato sauce on top of the cheese instead of under it. Well, I’m sorry Chicago, but she didn’t like it. New York style pizza is still her favorite. Mom and Dad liked it, though. But don’t worry, during our time here she liked plenty of other places to eat in Chicago. After all, there are plenty of kid-friendly restaurants in Chicago.

The next day’s itinerary had us venturing out to Millennium Park to visit the famous Cloud Gate “bean” sculpture and the other fun activities offered by the park. The reflective bean is better experienced in person than in a photo, as its curved surfaces entice both children and adults. Walking under the oddly shaped piece of art is also interesting, as your reflection is distorted multiple times in a seemingly infinite manner. The reflection of the Chicago skyline in the bean is also mesmerizing. Next we headed out to the kids area at Maggie Daley Park where one of the best playgrounds in Chicago (and the country) can be found (at least in our daughter’s opinion). Multiple areas for children of different ages can be found in the part, and each one is unique and well designed. Some sections of the playground resemble boats at sea, and a large whale tail spouts water so that kids can play in it on a warm day. Another large area looks like a huge castle with two big towers supporting a suspension bridge, and multiple slides and climbing areas surrounding it. For older children and teens, a huge climbing wall can be found on the north side of the park.

Another of Chicago’s great parks is Lincoln Park, which we visited that evening. This is where visitors can find the Chicago Zoo. The best part: it’s free! (In fact, lots of things are free in Chicago.) If you find that don’t have much time, like we had, then it’s great to just take an hour or so and stroll through it. One area has farm animals, while another has a variety of African animals. The Gorilla building is a great place to stay for awhile, as is the aviary.

The next morning we hopped on the “L” train, which for kids is like a ride as you zoom through the skyscrapers above the streets. Our destination was the famous Sears Tower, which is currently named the Willis Tower due to some weird naming rights. One hundred and three stories up to the Sky Deck at the top is no laughing matter, especially if you’re not sure how your toddler will handle it. Several of the windows stick out sideways from the building so that you can literally stand on the glass and look all the way down to the streets below. It’s mind bending and a little nauseating if you’re not prepared. Our daughter kept saying, “what if I fall?” After multiple reassurances that she wouldn’t, we were able to get a few photos. But she enjoyed the view from the “normal” windows even more, looking out over the city. It was a clear day for us, and we could see for miles. When it was time to leave, she threw a tantrum. Traveling with a toddler is not always easy, as any parent can admit to. While our photos might make family life on the road seem perfect, kids are still kids and real life happens in between the calm moments when we can snap a quick photo.

That afternoon we took an architectural boat tour along the river through the skyscrapers for about an hour. While us grown-ups found the history and stories of the city to be fascinating, our daughter was more interested in the comings and goings of other boats and the colors of the different buildings as they reflected the sun. And goldfish crackers, lots of goldfish crackers. She also enjoyed walking along the waterfront in Chicago, as did we all.

On the morning we left, she waved to the skyline and said, “bye-bye tall buildings!” We all had a great time, and one day we’ll be back.