How much does it cost to travel to Plovdiv?

How much money will you need for your trip to Plovdiv? You should plan to spend around ư117 ($62) per day on your vacation in Plovdiv, which is the average daily price based on the expenses of other visitors. Past travelers have spent, on average, ư31 ($17) on meals for one day and ư32 ($17) on local transportation. Also, the average hotel price in Plovdiv for a couple is ư129 ($69). So, a trip to Plovdiv for two people for one week costs on average ư1,641 ($873). All of these average travel prices have been collected from other travelers to help you plan your own travel budget.

A vacation to Plovdiv for one week usually costs around ư821 for one person. So, a trip to Plovdiv for two people costs around ư1,641 for one week. A trip for two weeks for two people costs ư3,283 in Plovdiv. If you're traveling as a family of three or four people, the price person often goes down because kid's tickets are cheaper and hotel rooms can be shared. If you travel slower over a longer period of time then your daily budget will also go down. Two people traveling together for one month in Plovdiv can often have a lower daily budget per person than one person traveling alone for one week.


How expensive is Plovdiv? How much money do I need for Plovdiv?

How much does a trip to Plovdiv cost? Is Plovdiv expensive? The average Plovdiv trip cost is broken down by category here. All of these Plovdiv prices are calculated from the budgets of real travelers.

Looking for a hotel in Plovdiv? Prices vary by location, date, season, and the level of luxury. See below for options.

How much does it cost to go to Plovdiv? Naturally, it depends on the dates. We recommend Kayak because they can find the best deals across all airlines.

The price of renting a car in Plovdiv will depends on dates, the type of car, the location, and your age. We recommend Kayak because they can find the best deals across all car rental companies.

Plovdiv On a Budget 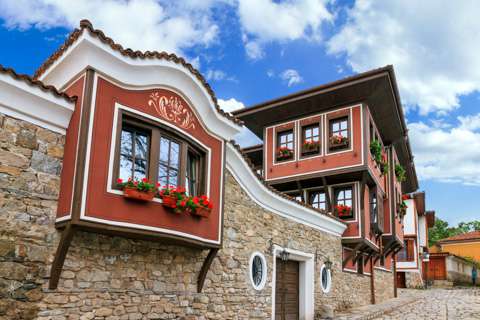 Plovdiv, Bulgaria
Located in a large, hilly plain between the Rhodope Mountains in the south of Bulgaria and the Balkan Range in the central part of the country, Plovdiv sits uniquely spread across six hills. It is one of the oldest continuously-inhabited cities in the world, dating back roughly 8,000 years. Some of its best features are its ancient ruins and historic architecture.

With a history that dates to the ancient Thracians, a few thousand years before Roman occupation, Plovdiv is a treasure trove of relic monuments. One of the best-known examples from antiquity is the Ancient Theatre, which is still in use roughly 2,000 years after its construction, accommodating 7,000 people. Operas and theatre performances are held in the summer. Another treasured monument is the 2nd-century Roman Stadium, which once sat 30,000 spectators, though much of it now lies buried beneath Plovdiv's Old Town. The cobbled streets and traditional homes of Old Town blend with the ruins in a unique and interesting way, showing layers of time with Bulgarian revival buildings amidst an ancient Roman Forum.

Plovdiv also features a number of religious centers that speak to the culture of the region. Bachkovo Monastery, for example, lies on the outskirts in the town of Asenovgrad. Founded in 1083, it is the oldest Eastern Orthodox monastery in Bulgaria and brings together Bulgarian, Georgian, and byzantine religious traditions. Others, within Plovdiv itself, include the city's oldest Christian church called the Church of St. Konstantin and Elena from the 4th century, and the Dzhumaya Mosque built by the Ottomans in the 1300s.

Historically the city developed on seven hills until one was destroyed in the early 20th century. The leftover material was used to pave most of Plovdiv's streets. Today six hills remain, and they are called the Three Hills (Nebet, Dzhambaz, and Taksim Tepe), the Hill of the Youth (Dzhendem Tepe), the Hill of the Liberators (Bunarzhik), and the Hill of Danov (Sahat Tepe). The Three Hills make up the most historic part of the city-the Old Town, or, the Ancient Plovdiv Architectural and Historical Reserve. Of the Three Hills, Nebet Tepe is recognized as a cultural monument of national importance, featuring the fortress remains of a prehistoric settlement that grew to become the Thracian city of Evmolpia by the 12th century BC. Old Plovdiv is compact and walkable, with the main downtown road blocked to traffic for pedestrians only. There are plenty of historic sites with many Bulgarian revival buildings now used as museums, hotels, and restaurants, as well as opportunities for buying local goods and art. Explore the cobblestone streets and discover other centuries-old treasures, including churches, mosques, and an ancient gateway.

From walking Plovdiv's scenic hills to exploring Old Town's historic architecture, visitors can spend days just wandering on foot and taking in the sights. One might enjoy a musical or theatre performance in one of Old Town's unique venues or walking the cobbled streets to shop for the perfect souvenir. Some of the most popular gifts tend to be Bulgarian rose products-mostly shampoos, gels, oils, and perfumes.

For a little more insight into the region's cultural, historical, and artistic heritage, visitors can also step inside one of the city's museums. A few of the more popular exhibits include the Regional Ethnographic Museum and the Plovdiv Aviation Museum.

Plovdiv is also a great base to explore some of Bulgaria's best wineries, which are quite nice and very scenic. Plovdiv even has its own wine festival every year, too.

Bulgarian cuisine is typical of Eastern Europe with some Balkan influences, such as Persian, Turkish, and Greek cooking. Dishes include any variety of meats-lamb, goat meat, veal, chicken or pork-grilled with spices and herbs or often cooked into stews. Yogurt is also central to many meals. Banitsa, for example, is a popular breakfast pastry of eggs, white cheese, and yogurt between phyllo layers. Another example that uses yogurt is a cold soup of cucumbers, garlic, yogurt, and dill known as tarator. Bulgarians also cook with a white cheese called sirene; it is similar to feta and is used in salads and pastries. Other popular food items include cold cuts like salami and sausage, a variety of soups and stews like shkembe chorba (spicy, made with tripe) and bob chorba (bean soup), salads and relishes made with seasonal vegetables and cheeses, bread and pastries, and kebab. There are also a variety of Bulgarian wines, beers, distilled liquors, and fermented beverages, such as boza (made from roasted flour) and ayran (from yogurt).

The international Plovdiv Airport is located near the village of Krumovo, 15 kilometers away from the city center (about 20 minutes by car). It is primarily served by the low-cost airline RyanAir. In addition to transfer by private car, the city center can also be reached by taxi and public shared shuttle (line No. 2).

Another way to travel to Plovdiv, both nationally and internationally, is by train. The railway station is about a 10-15 minute walk to the city center.