How much does it cost to travel to Sofia?

How much money will you need for your trip to Sofia? You should plan to spend around ư94 ($58) per day on your vacation in Sofia, which is the average daily price based on the expenses of other visitors. Past travelers have spent, on average, ư27 ($16) on meals for one day and ư12 ($7.51) on local transportation. Also, the average hotel price in Sofia for a couple is ư118 ($72). So, a trip to Sofia for two people for one week costs on average ư1,322 ($806). All of these average travel prices have been collected from other travelers to help you plan your own travel budget.

A vacation to Sofia for one week usually costs around ư661 for one person. So, a trip to Sofia for two people costs around ư1,322 for one week. A trip for two weeks for two people costs ư2,644 in Sofia. If you're traveling as a family of three or four people, the price person often goes down because kid's tickets are cheaper and hotel rooms can be shared. If you travel slower over a longer period of time then your daily budget will also go down. Two people traveling together for one month in Sofia can often have a lower daily budget per person than one person traveling alone for one week.


How expensive is Sofia? How much money do I need for Sofia?

How much does a trip to Sofia cost? Is Sofia expensive? The average Sofia trip cost is broken down by category here. All of these Sofia prices are calculated from the budgets of real travelers.

Find a hostel, guesthouse, or B&B in Sofia

How much does it cost to go to Sofia? Naturally, it depends on the dates. We recommend SkyScanner because they can find the best deals across all airlines.

The price of renting a car in Sofia will depends on dates, the type of car, the location, and your age. We recommend SkyScanner because they can find the best deals across all car rental companies.

Sofia On a Budget

Sofia, Bulgaria
Sofia is the capital of Bulgaria and also its largest city. Some people have tried to compare it to Budapest, but the cities are actually quite different. In Sofia you will find wonderful European style architecture intertwined with Communist style buildings. It's fascinating to see the two dramatically different building styles immediately next to each other. There are also many Orthodox Churches around town, with their beautiful domes and intricate details.

Sofia is also conveniently located in close proximity to a popular ski resort at Vitosha mountain. It is jumping off distance to explore and enjoy some beautiful countryside and get away from the hustle and bustle of the city.

The climate in Sofia is humid continental and the winters are cold and snowy while the summers are warm and sunny. At it's coldest, the city can reach around -15 degrees Celsius. It's not uncommon for there to be fog during the winter and there are on average 60 days with snow cover a year. Even during the summer months, Sofia is usually a little cooler than the rest of Bulgaria because of its high altitude. During heat waves though, temperatures can reach 35 degrees Celsius. During the spring and fall months temperatures and weather conditions can vary widely.

The city itself has some wonderful museums, galleries, parks and gardens. Popular sights include the National Assembly of Bulgaria, Sofia University, the National Palace of Culture, the National Museum of Military History, St. Alexander Nevsky Cathedral, Boyana Church and the Church of St. George, among others.

If you're in town on a weekend you can easily find an interesting street market. Booths will line the street with vendors selling knickknacks of varying quality. Some items are fascinating representations of the Communist era and can make for a unique souvenir.

There are 24 districts to Sofia, which include three other towns and 34 villages. Some notable districts include Oborishte, Sredets, Vazrazhdane, Mladost and Vitosha. Oborishte is at the heart of the city and where you'll find the majority of the landmarks and monuments. The architecture is predominantly neo-Renaissance and Viennese in style. There is also an impressive green belt. Sredets is next to Oborishte and it has similar architecture. This is where the Gardens of Boris is located as well as the Vasil Levski National Stadium. Vazrazhdane is the economic center of the city. There are many banks, manufacturing companies as well as the Central Sofia Market Hall and St. Nedelya Church. Mladost is a rapidly developing part of the city. A large portion of the population resides here and there are great transportation connections. Vitosha is at the foot of the Vitosha Mountain. There are many luxury estates and villas here, and there are many transportation connections to the city center.

Activities in Sofia include the opera and ballet, citywide tours, swimming areas and spas. Popular festivals include the Sofia Film Festival, Sofia Design Week, and the Water Tower Art Fest, among others. Do take note that during major national holidays such as Christmas or Orthodox Easter, the city is completely deserted and many places are closed.

There are plenty of restaurants in Sofia, and it easily has the best food selection in all of Bulgaria. If you're on a particularly tight budget, fast food options are abundant and many places offer a convenient take away service. Pizza is ubiquitous in Sofia and is often one of the cheapest options available. Also consider trying some of the interesting pastry options available around town, many of which are filled with a hearty meat filling. Salads are another great option in Sofia. They usually do not include lettuce, but instead have an impressive diversity of ingredients that are fresh and delicious. The feta style cheese in particular is quite good. Also, plenty of Vegan restaurants can be found in Sofia, too. You can find some more traditional restaurants around Sofia as well. Many are more expensive, but have a fun atmosphere with folk music or some form of live entertainment. International restaurants are often more expensive than you might expect, but the food is usually good and a nice break from the options available elsewhere in Bulgaria.

Public transportation in Sofia is well established and efficient. There are buses, trolleys, trams, and a subway. In all, there are 15 tram lines, 9 trolley lines, 93 bus lines and two metro lines. It is helpful to know that bus #84 runs from the airport to the city center. There is also a subway line that connects to the airport. The entire public transportation system operates between the hours of 5 am and 12 am. After that time you must take a taxi. The city's taxi's are yellow and they can be flagged down on the street or called by phone. They are usually fast, reliable, and affordable.

If you want to learn more about Bulgaria, check out 55 Facts About Bulgaria that will Leave You Speechless. 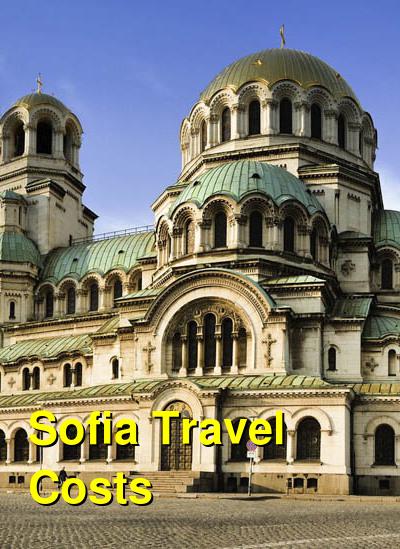 Head Out of Town to Vitosha

By backpackguru in Entertainment
Vitosha is a nearby mountain and makes for an excellent day trip out of Sofia. It is just south of the city and can easily be reached by public transportation, but if you have your own car it's that much more convenient. When the weather is warm and sunny, it's a great place to explore and walk around. During the winter, there is a ski resort and it's easy to do a day ski trip from Sofia. Whatever time of year you go, if the weather is clear, you'll get a wonderful view of the city below.