How much does it cost to travel to Bogota?

A vacation to Bogota for one week usually costs around CO$957,291 for one person. So, a trip to Bogota for two people costs around CO$1,914,583 for one week. A trip for two weeks for two people costs CO$3,829,165 in Bogota. If you're traveling as a family of three or four people, the price person often goes down because kid's tickets are cheaper and hotel rooms can be shared. If you travel slower over a longer period of time then your daily budget will also go down. Two people traveling together for one month in Bogota can often have a lower daily budget per person than one person traveling alone for one week.


How expensive is Bogota? How much money do I need for Bogota?

How much does a trip to Bogota cost? Is Bogota expensive? The average Bogota trip cost is broken down by category here. All of these Bogota prices are calculated from the budgets of real travelers.

Find a hostel, guesthouse, or B&B in Bogota

What did other people spend on Food in Bogota?

Typical prices for Food in Bogota are listed below. These actual costs are from real travelers and can give you an idea of the prices in Bogota, but your costs will vary based on your travel style.

How much does it cost to go to Bogota? Naturally, it depends on the dates. We recommend SkyScanner because they can find the best deals across all airlines.

The price of renting a car in Bogota will depends on dates, the type of car, the location, and your age. We recommend SkyScanner because they can find the best deals across all car rental companies.

What did other people spend on Transportation in Bogota?

Typical prices for Transportation in Bogota are listed below. These actual costs are from real travelers and can give you an idea of the prices in Bogota, but your costs will vary based on your travel style.

What did other people spend on Entertainment in Bogota?

Typical prices for Entertainment in Bogota are listed below. These actual costs are from real travelers and can give you an idea of the prices in Bogota, but your costs will vary based on your travel style.

Tips and Handouts Budget in Bogota

What did other people spend on Water in Bogota?

Typical prices for Water in Bogota are listed below. These actual costs are from real travelers and can give you an idea of the prices in Bogota, but your costs will vary based on your travel style.

Bogota On a Budget 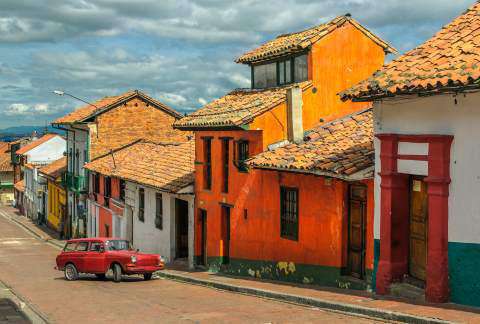 La Candalaria, Bogota, Colombia
Sprawling across a high altitude in the Columbian Andes region, Bogota is the capital city of Columbia. It is a mix of the old and new with century-old plazas and churches shadowed by towering skyscrapers, museums representing the history, art, and culture of the region, as well as a mix of distinct neighborhoods from quaint and historic to trendy and contemporary.

If you are interested in seeing the historical hub of Bogota, look no further than La Candelaria. This is the city's colonial center of cobbled streets lined with centuries-old churches, old architecture in homes and buildings, as well as a handful of important museums. Some of these include the Emerald Museum where you can see artists making jewelry and the Emerald Market where you can make purchases of the precious gems. There is also the Gold Museum which exhibits an impressive collection of gold and pre-Colombian artifacts from Colombia and surrounding nations, as well as Museum of Colonial Art amongst others.

In the San Diego region, you can take a ride up to the Cerro de Monserrate for beautiful panoramic views of the city. Also in the area is the National Museum, the oldest in the country build in 1823 with stone and brick fortress architecture. The museum houses a collection of over 20,000 pieces including works of art and objects representing different national history periods dating back 10,000 years BC. Other sights include the historic Bolivar Square, the Bogota Botanical Garden, plenty of parks, and a number of churches.

Bogota is ultimately divided into four sections. The South is mainly the poorer section of the city, El Centro is the original downtown with traditional heritage locations and public offices, El Occidente is home to Bogota's major sporting venues and outdoor parks, and the North is where most modern development exists with shopping centers, boutiques, cafes, and nightclubs. Beyond this, the city is further divided into neighborhoods like La Candelaria, the colonial district where the city was founded in 1538. Along its cobbled streets you will find colonial-era landmarks like the neoclassical performance hall Teatro Colon and the 17th-century Iglesia de San Francisco. Chapinero makes up the new downtown with plenty of opportunity for shopping, dining, and sight-seeing, El Salitre focuses more on outdoor activities like sports, concerts, and festivals, and La Macarena is a bohemian neighborhood around the bullfight ring full of cafes, art galleries, and restaurants.

For a more guided experience of seeing Bogota there are plenty of tours available that cater to different areas of interest. The Bogota Salsa Tour, for example, takes visitors on a tour through the city through the route of live salsa music and dancing. It is an important part of the city's culture and offers a unique way to experience the city's nightlife and entertainment. There are also walking and bike tours to experience the historic side of the city in a place like La Candelaria, and even a more contemporary Graffiti Tour for those interested in the alternative art scene.

On the outskirts of the city, there is opportunity for hiking and mountain biking, as well as ecological tours, like an eco-hike in the Humedales, for those interested in the natural environs of the area.

Throughout the year there are also markets, performances, and festivals held in Bogota. Every Friday and Sunday night, for example, Avenida Septima is closed for all sorts of street performers, live music, magic shows, crafts, and more. And then there is also the Iberoamerican Theater Festival, the biggest theater festival in the world, which occurs every two years in April.

Being such a large city, Bogota features a whole range of environments to kick back and indulge in some of the flavors and textures of the region. One traditional dish you might find is arepas, corn flour based pancakes, sometimes made with cheese or slightly salted. Empanadas are also popular in Bogota and all of South America. They are pasties or pot pies usually consisting of meat, potato, vegetables and rice wrapped in a corn flour crust. Tamal, usually eaten for breakfast, is a mixture of meat, chicken, potato, vegetables, and yellow corn wrapped in plantain leaves and then boiled. Traditionally, tamal should be accompanied by a large mug of hot chocolate and a piece of bread. And then there is ajiaco, a traditional thick soup based on three kinds of potatoes, chicken, avocado, dairy cream, herbs, and corn amongst other ingredients. All these and more can be found in any of the city's main dining hubs.

By plane, Bogota is served by El Dorado International Airport, located about 20 minutes from the downtown area in good traffic. It is the third busiest airport in Latin America with flights operating to and from North America, the United States, South America, the Caribbean, and Europe. To get to the city from the airport, you can take a bus or taxi or the Transmilenio-Bogota's bus rapid transit system.

The city itself is organized on a kind of grid pattern and can be navigated by taxi, Uber, Transmilenio, bus, or bicycle.