How much does it cost to travel to Pereira?

How much money will you need for your trip to Pereira? You should plan to spend around CO$65,365 ($18) per day on your vacation in Pereira, which is the average daily price based on the expenses of other visitors. Past travelers have spent, on average, CO$12,134 ($3.43) on meals for one day and CO$2,300 ($0.65) on local transportation. Also, the average hotel price in Pereira for a couple is CO$10,000 ($2.83). So, a trip to Pereira for two people for one week costs on average CO$915,112 ($259). All of these average travel prices have been collected from other travelers to help you plan your own travel budget.

A vacation to Pereira for one week usually costs around CO$457,556 for one person. So, a trip to Pereira for two people costs around CO$915,112 for one week. A trip for two weeks for two people costs CO$1,830,224 in Pereira. If you're traveling as a family of three or four people, the price person often goes down because kid's tickets are cheaper and hotel rooms can be shared. If you travel slower over a longer period of time then your daily budget will also go down. Two people traveling together for one month in Pereira can often have a lower daily budget per person than one person traveling alone for one week.


How expensive is Pereira? How much money do I need for Pereira?

How much does a trip to Pereira cost? Is Pereira expensive? The average Pereira trip cost is broken down by category here. All of these Pereira prices are calculated from the budgets of real travelers.

Find a hostel, guesthouse, or B&B in Pereira

What did other people spend on Food in Pereira?

Typical prices for Food in Pereira are listed below. These actual costs are from real travelers and can give you an idea of the prices in Pereira, but your costs will vary based on your travel style.

How much does it cost to go to Pereira? Naturally, it depends on the dates. We recommend SkyScanner because they can find the best deals across all airlines.

The price of renting a car in Pereira will depends on dates, the type of car, the location, and your age. We recommend SkyScanner because they can find the best deals across all car rental companies.


What did other people spend on Transportation in Pereira?

Typical prices for Transportation in Pereira are listed below. These actual costs are from real travelers and can give you an idea of the prices in Pereira, but your costs will vary based on your travel style.

Tips and Handouts Budget in Pereira

What did other people spend on Water in Pereira?

Typical prices for Water in Pereira are listed below. These actual costs are from real travelers and can give you an idea of the prices in Pereira, but your costs will vary based on your travel style.

Pereira On a Budget

Pereira, Colombia
Situated in a small valley in the western Andes, Pereira is the capital city of Risaralda, Colombia. The city is surrounded by coffee producing agriculture and sits in the middle of a triangle of cities including Bogota, Medillin and Cali, each of which is about a three to five hour drive away.

The city itself is very much student oriented, as there are many universities around town and at least one quarter of the population is made up of students. There is also a very European vibe to the city and you will find the area beautiful with many parks and museums.

Pereira is found in a warm moorland area with an average temperature of around 72 degrees. The temperatures remain relatively consistent throughout the year with highs in the high 70s Fahrenheit to low 80s Fahrenheit. Low temperatures are usually in the low 60s Fahrenheit. Rain is heaviest during the months of April and May as well as October and November.

There is no shortage of budget hotels around town, but you'll also find some options if you're looking for something more luxurious or comfortable. Many of the hotels are downtown, making them convenient for many of the city's popular sights as well as any public transportation connections.

There are a handful of shopping malls around town if you're interested in doing some shopping. You'll also find some great theaters, discos, and concert halls. Pereira also has several sports teams. The main football team in town is the Deportivo Pereira. They play in the Categoria Primera B. The city also has the Hernan Ramirez Veillegas Stadium, a velodrome, a skating area, and an Olympic swimming pool and motocross track.

Every year the Fiesta de la Cosecha is celebrated to recognize the anniversary of the founding of the city. It is fun to be in town during this "Harvest Fest".

Dining in Pereira is a very pleasant experience. Much of the cuisine comes from the Antioquia region to the northwest. During lunch you'll likely enjoy a plantain soup, followed by a rice and meat plate which includes either fried pork, beef, or chicken, and a cabbage salad on the side. The meal is usually served with a fresh juice made with mangoes or perhaps an unfamiliar local fruit variety. The meal may also include either coffee or dessert.

The best airport to fly into is Matecana International Airport. This is the largest airport in the region and it receives flights from several domestic locations and two international destinations, Panama City and New York City.

The easiest way to travel around the city is either by bus or megabus. Megabuses are a more comfortable and relaxed option, although slightly more expensive. It is also relatively easy to find a taxi around town. 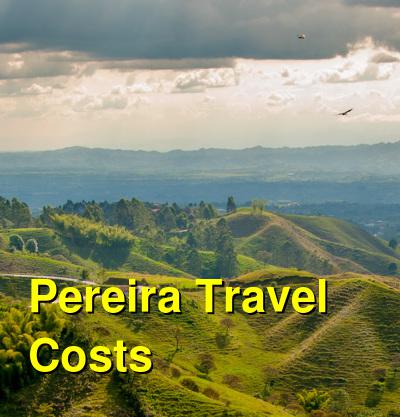 By backpackguru in Transportation
There's a very comprehensive system of buses throughout Pereira that connects most of the city. They cost about 1,600 COP for a ride. There are a range of vehicle types including large buses, small vans, and Wilys jeeps. Generally the system is safe but as usual, keep you're wits about you when you visit specific neighborhood in the city. It's always good to use caution when on public buses.