A Travel Price Comparison for Families, Couples, and Backpackers Asuncion vs. Mendoza for Vacations, Tours, and Honeymoons

Should you visit Asuncion or Mendoza?

If you're trying to decide where to visit between Asuncion or Mendoza, this travel cost comparison can help. The overall cost of travel is usually a consideration when deciding where to go next, and the cost comparison below can help you decide based on the average prices from other travelers along with your own travel budget.

Mendoza is a city in western Argentina and more precisely in the desertic Cuyo region. Mendoza is the center of the Argentinian wine industry and is famed around the world for its vineyards and wine production. Spread across the valley of the Rio Mendoza and in the foothills of the Andean mountain range, Mendoza is also near the Aconcagua, the highest mountain outside of the Himalayas. The bustling and scenic city of wide, leafy avenues, atmospheric plazas and cosmopolitan cafes spoils visitors with unique natural attractions and historical landmarks. If you can, visit Mendoza during the harvest festival at the end of February. There are many events and festivals in Mendoza and they are usually free. Each has a different theme, and they usually have a stage with singing and dancing and booths that sell food around a plaza. Seventy percent of Argentina's wines are produced here, and Mendoza is especially known for its world-famous malbecs.

Which city is cheaper, Mendoza or Asuncion?

The average daily cost (per person) in Asuncion is $58, while the average daily cost in Mendoza is $52. These costs include accommodation (assuming double occupancy, so the traveler is sharing the room), food, transportation, and entertainment. While every person is different, these costs are an average of past travelers in each city. Below is a breakdown of travel costs for Asuncion and Mendoza in more detail.

For a normal double-occupancy room in Mendoza, $40 is the average cost for a hotel room. Also in Mendoza, the typical price for a place to stay for one person is $20, such as in a hostel.

While meal prices in Mendoza can vary, the average travelers spends about $23 per day on food. Based on the spending habits of previous travelers, when dining out, an average meal in Mendoza should cost around $9.20 per person. Breakfast prices are usually a little cheaper than lunch or dinner. The price of food in sit-down restaurants in Mendoza is often higher than fast food prices or street food prices.

For Mendoza, here are some examples of average food and meal prices for travelers:

For Mendoza, here are some samples of tours and activities related to meals and dining experiences:

To get around in Asuncion, the average visitor spends $7.52 per day, per person. This includes the costs of taxi rides and private drivers as well as public transportation, which tends to be much more affordable.

Mendoza's transportation costs can vary by the type of transport chosen by visitors. Naturally, taxis and private drivers cost much more than public transportation options. On average, visitors spend $10 per person, per day on transportation in Mendoza.


Hired Cars and Shuttles in Asuncion

Hired Cars and Shuttles in Mendoza

Also for Mendoza, here are a few examples of actual transportation services:

Is it cheaper to fly into Asuncion or Mendoza?

Prices for flights to both Mendoza and Asuncion change regularly based on dates and travel demand. We suggest you find the best prices for your next trip on Kayak, because you can compare the cost of flights across multiple airlines for your prefered dates.

Sightseeing, admission tickets, things to do, and other entertainment expenses in Mendoza can vary widely by price. On average, visitors spend around $15 per person, per day on entertainment and sightseeing here.


Tours and Activities in Asuncion

Tours and Activities in Mendoza

For Mendoza, here are a few prices for actual activities, tours, and tickets provided by various companies:

Below are a few samples from actual travelers for alcohol and nightlife costs in Mendoza:

Sample the Local Flavors in Mendoza

Here are a few nightlife and alcohol tours and activities from local tour providers in Mendoza:

When comparing the travel costs between Asuncion and Mendoza, we can see that Asuncion is more expensive. However, the two cities are actually relatively comparable in price, as the difference is somewhat minimal. Generally, this means that you could travel with generally the same travel style and level of luxury in each place. Since both cities are in South America, it's no surprise that their costs are relatively close, as many destinations here have somewhat similar travel prices overall. 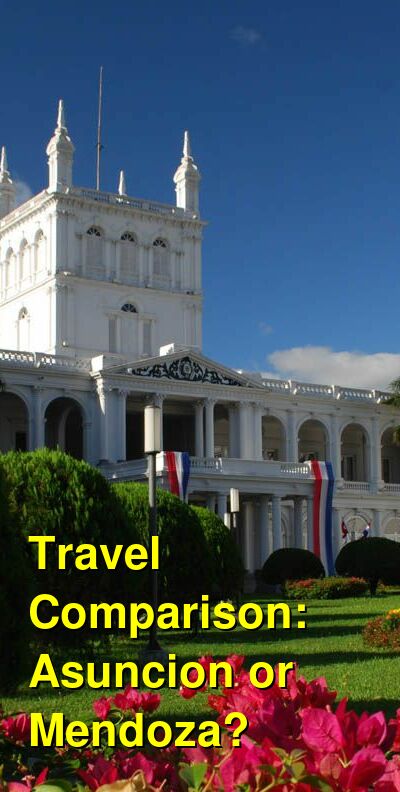