How much does it cost to travel to La Plata?

How much money will you need for your trip to La Plata? You should plan to spend around AR$5,956 ($36) per day on your vacation in La Plata, which is the average daily price based on the expenses of other visitors. Past travelers have spent, on average, AR$2,331 ($14) on meals for one day and AR$1,709 ($10) on local transportation. Also, the average hotel price in La Plata for a couple is AR$4,795 ($29). So, a trip to La Plata for two people for one week costs on average AR$83,379 ($504). All of these average travel prices have been collected from other travelers to help you plan your own travel budget.

A vacation to La Plata for one week usually costs around AR$41,689 for one person. So, a trip to La Plata for two people costs around AR$83,379 for one week. A trip for two weeks for two people costs AR$166,758 in La Plata. If you're traveling as a family of three or four people, the price person often goes down because kid's tickets are cheaper and hotel rooms can be shared. If you travel slower over a longer period of time then your daily budget will also go down. Two people traveling together for one month in La Plata can often have a lower daily budget per person than one person traveling alone for one week.


How expensive is La Plata? How much money do I need for La Plata?

How much does a trip to La Plata cost? Is La Plata expensive? The average La Plata trip cost is broken down by category here. All of these La Plata prices are calculated from the budgets of real travelers.

Looking for a hotel in La Plata? Prices vary by location, date, season, and the level of luxury. See below for options.

How much does it cost to go to La Plata? Naturally, it depends on the dates. We recommend Kayak because they can find the best deals across all airlines.

The price of renting a car in La Plata will depends on dates, the type of car, the location, and your age. We recommend Kayak because they can find the best deals across all car rental companies.

What did other people spend on Food in La Plata?

Typical prices for Food in La Plata are listed below. These actual costs are from real travelers and can give you an idea of the prices in La Plata, but your costs will vary based on your travel style.

What did other people spend on Entertainment in La Plata?

Typical prices for Entertainment in La Plata are listed below. These actual costs are from real travelers and can give you an idea of the prices in La Plata, but your costs will vary based on your travel style.

La Plata On a Budget 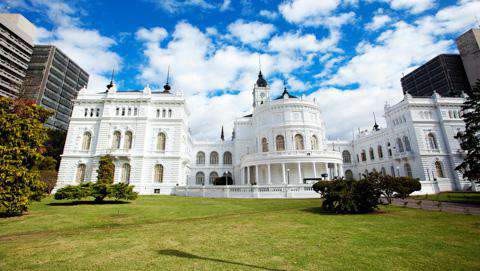 La Plata has very interesting architecture, which makes it the kind of city where you will simply want to wander up and down the big sidewalks and enjoy the beautifully-designed and varied buildings. If you have time, head to La Plata Casa Curutchet, the only house in all Latin America designed by the famous Swiss-French architect Le Corbusier, often considered as one of the pioneers of modern architecture. Check out La Plata's park, east of the centre, which is probably one of the most beautiful places in the city. The 'bosque' hosts the stadium of the local football team 'Gimnasia y Esgrima La Plata' but also the museum of natural science, the zoological gardens and the observatory. Everyday the park is filled with thousands of Argentinian enjoying a cup of mate, doing their daily jogging, studying, relaxing or playing a picadito, an informal football match. Plants and flowers from all different parts of South America find their home here in el bosque thanks to the work of a dedicated local scientific community. Another sight not to be missed in La Plata is its Cathedral. From the viewpoint located in the "Tower of Jesus", it is possible to see the coast of Colonia del Sacramento in Uruguay on clear days.

Inhabitants of La Plata are extremely proud of their Natural History Museum. It has plenty of dinosaur skeletons, a detailed permanent exhibition on the numerous pre-Columbian cultures in south America, and other world class exhibits. Located in the green parks north of the city centre, the entry costs USD$2. For art-lovers, the Museo Municipal de Bellas Artes has a small exhibition space displaying temporary contemporary art exhibitions. La Plata is also a haven for science freaks, as it has one of the most important universities in Latin America, a beautiful Museum of Natural Science and an Observatory, which is open most days and offers guided tours. The Scientific tour includes the visit of the 1883, pure Victorian style Observatory building, the museum of astronomy and geophysics and the room of the telescope, "El gran Ecuatorial". If you need to get out of the city, within just a few minutes from La Plata you can find lots of places to enjoy a day in the countryside. Discover the gaucho world with an afternoon of horse riding, stuff yourself with a delicious asado, relax in a swimming pool or test your limits with aviation sports such as hang gliding.

Barbecue, burgers, seafood and traditional meals make up the La Plata's food scene. Farmers markets with locally grown produce and fresh meats are also very popular in the city. You will have a great list of restaurants, bars, clubs and cafes to choose from during your stay in La Plata. In the very centre of the city there are a lot of pubs, classy bars and upper-class restaurants and the further you get out to the suburbs, the more you will find rock and indie bars heading towards the shady look. The Old Station District is the student's favourite area, as it holds plenty of cool charismatic pubs and some great live music.

Buses from Buenos Aires Retiro station to La Plata cost USD$2 with your SUBE card and take between 1 to 2 hours depending on the route and traffic. The two main bus services are Plaza and Costera and leave Buenos Aires every 20 to 30 minutes each day from 5h30 to 22h30. Other Argentinian cities offer bus services to La Plata but the majority of the rides, especially from the north, are not direct and most of them stop in Buenos Aires. You can also rent a car and take the highway on your own to reach La Plata. However because the bus is a rather simple and cheap option and La Plata is an easy city to navigate by foot because of its grid system, it is not necessarily recommended to rent a car for this trip. In La Plata, you can walk from one side of the city to another within 45 minutes. Taxis are plentiful, cheap and can be hailed on the street. Make sure to stay vigilant as the diagonal avenues that cut through La Plata can be confusing and taxi drivers will often take advantage of that to increase the price on the meter. The city buses (micro) are cheap and reliable. Prices are based on distance travelled, starting at 6 pesos for up to 3 km and 7 pesos anything over 27 km. You must specify the destination upon entering the bus and the driver will charge accordingly. You can buy a prepaid Sube card (valid for La Plata, Buenos Aires and travel in between) at any news stand for 25 pesos. You must also hale the bus as it passes the bus stop or it will continue its route.